I also played Budget Cuts and Job Simulator, which used humor along the lines of The Office television show and Valve’s Portal games to make fun of everyday life. Each was a tactile experience, where you perform tasks in VR to get things done.

Fantastic Contraption is a puzzle game, and I built contraptions to get through different virtual spaces. VR Minigolf is a miniature golf game, and I held a putter in one or two hands and swung it to hit a golf ball. Each hole was more and more elaborate, like multilevel fairways that you would never see at a real mini golf place. It was hard to get the strokes just right, but it really did sound like you were hitting a golf ball.

And there was Call of the Star Seed: The Gallery. I got started in this game where you could move from one place to another by holding up your hand and designating the spot where you wanted to go. But instead of moving there, you simply blink your eyes. That’s right, you blink. Then you move to that spot. It took a while to figure this out, but once I did it, I could see how you could make it happen with a lot of speed. This demo showed the start of a narrated experience that looked like a pretty cool adventure game on rails.

I’m looking forward to spending more time with all of these games. They were all clearly high-end experiences, though Elite: Dangerous felt more like a port of an existing PC game than the other ones did.

Not everything is going to be easy when it comes to setting up the Vive. You’ll need to mount the two sensors high in a room, either on a book-case or on a special shelf you put up high. And you’ll have a pretty thick wire coming down from the back of your head, connecting you to the PC. If you kick out that wire, the simulation you see will come to an abrupt stop. At least the hand controllers are wireless and very responsive.

Above: The HTC Vive hand controller lets you grab things in virtual reality.

It’s easy to trip over the wire coming down your back as you turn around, so it’s best played with someone else in the room. But you don’t have the problem of bonking into your furniture as much with the Vive. That’s because the sensors can detect the objects in your room in real-time. Then they build a safe zone around you which represents the area of the room where you can safely move. You see this safe zone at all times while you are playing games.

SteamVR is different from the better-known Oculus VR. SteamVR uses timing sequences in a PC along with the laser light from spinning lasers in two separate Lighthouse base stations (or laser boxes that are plugged into outlets and are placed in two different places in a room). These lasers hit the different sensors that are embedded in the headset. Depending on the timing of when the lasers hit the sensors, the PC figures out the position and angle you are facing with the headset.

The PC then shows you the view that you should be seeing, given the position of where you are facing. The lasers are not acting like Kinect cameras in the Microsoft Xbox One and Xbox 360 game consoles. Those systems send light signals out and then capture them as they bounce off of objects and return to the camera. That kind of system takes an extreme amount of processing power to track multiple objects. It gets exponentially harder the more objects you add.

Above: HTC Vive sensor can detect the objects in your room with a laser.

The number of objects you can track are independent. You can have four or five people wearing headsets and be in the same area with just two base stations tracking all of the headsets.

One of the games, Hover Junkers, showed me that kind of experience. Two other players, each with their own headsets and PCs, joined me in the same multiplayer shooting game. I squared off against them as they drove these giant hovering junk vehicles around a desert canyon. It was hard trying to drive and shoot at the same time. But there was no problem having the three of us in the same experience. Hover Junkers will be able to support up to eight players at once.

In many ways, this is the real way to do VR. You have your hands on some very precise instruments that let you pick up things. You can grab ammo in the zombie shooter game Arizona Sunshine and shove them into a pistol, much like you would do in real life. That makes the simulation of a shooting game much more realistic, as you can’t just automatically watch as the gun is reloaded for you. It takes motion, and it makes shooting games much more tiring than they are when you play them with a game controller on the couch.

We played each game for about 15 minutes, and that seems like the natural break time for playing games in VR. But I’m looking forward to playing some of these games for many hours. 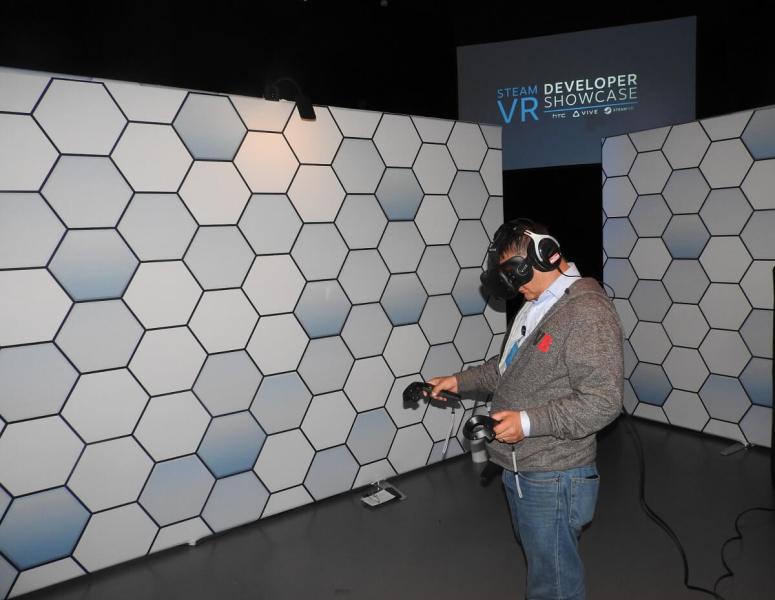 Above: Dean Takahashi uses the hand controllers for the HTC Vive VR headset.