Take-Two Interactive‘s 2K label and Firaxis Games are hard at work on Sid Meier’s Civilization VI, which debuts for PC on October 21. But I was lucky to get a sneak peek at the first 50 turns at a recent preview event.

And I have to say that this turn-based strategy game — the next entry in the award-winning Civilization franchise that Sid Meier created 25 years ago — is going to be a drastic change from Civilization V, which came out in 2010 on the PC. Just how different is an important question, as the Civilization franchise has sold more than 33 million copies since Meier’s original released in 1991.

And Take-Two and Firaxis would love to see many more sold.

Civ VI lead designer Ed Beach said in an interview with GamesBeat that the transition from V to VI wasn’t a small one, like the launch of a new expansion pack. It was a big one, and so the team had to take some risks like “unstacking” the cities and allowing them to spread their districts across multiple hexagons. With Civilization V, the designers previously unstacked military units, so that only one unit occupied each hex. Now the cities can spill over the map, and you can’t build everything you’d like in them. That means the cities get very specialized.

Dealing with a new sense of scale 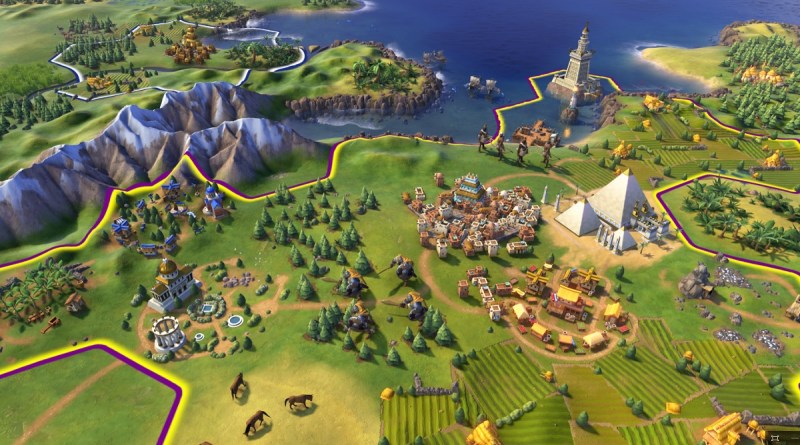 This system comes with a lot of restrictions. You might drop a harbor into a tile on the water. If you do, you can’t build something else in that tile, like a Wonder. It doesn’t necessarily mean that the maps will be huge, with armies and cities spread out. You may wind up with a few cities or lots of burgs.

When I interviewed Beach, I told him that this change disrupted my sense of scale on the maps. He felt that way at first, too. “It’s something I’ve had to come to terms with as well,” Beach said. “I live in the mid-Atlantic area. If you think of Washington D.C. as the city for that area, there are lots of regional pieces nearby. Norfolk might be the harbor. That’s where the Navy is based. There are great universities like Johns Hopkins in Baltimore. That might be the campus district. West Virginia is where all the mining goes, a couple of tiles away. That might be the industrial zone. If you think about it in those terms, it’s OK. I’m not saying it’s perfect. It’s still an abstraction, for sure.

“You could do the same thing with the U.K., the Benelux, things like that. Antwerp is the huge port for Belgium, but Brussels or Bruges is more the cultural capital. You can take any place in the world and divide it up like that.”

Defending a city can be complicated. But Beach pointed out that you can now make use of natural barriers, like mountains or the shoreline, so that you don’t have to commit a lot of military units just for defense.

I’ll have to get used to this change, as it throws me off. Now the defense of a single city could play out over hundreds of miles and a couple of centuries. That’s a pretty long military engagement, and it could just be a battle in a much larger war. What happens if the technology era changes during that time? That would be really screwed up.

The idea is to take full advantage of the terrain. Each hex that is near another can modify how your tile grows. You may get a bonus based on what is adjacent to the tile. Before, you could put down a building in a city and be done with it. Your districts can be containers for additional buildings. You can create a holy site that will eventually house religious buildings such as churches or temples. If you have a mountain pass, you may want to put a military encampment there to create an easily defended zone. You can put a science building near a mountain and discover astronomy more easily.

Hands-on with the Chinese society 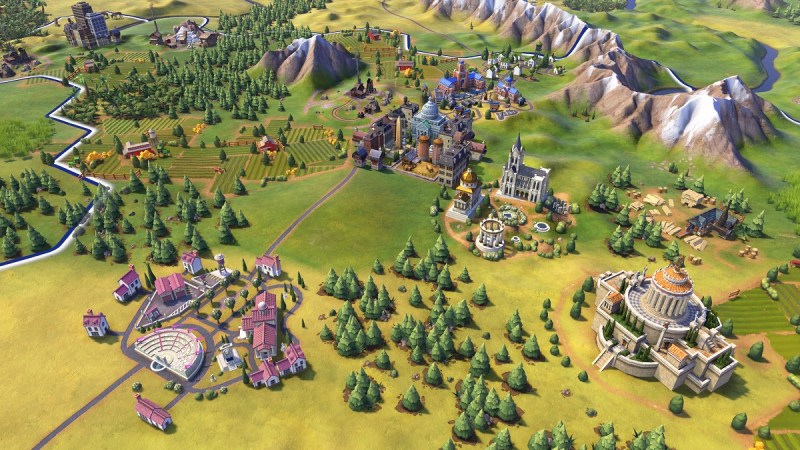 Firaxis’ Pete Murray showed us a couple of civilizations in our first play session. I started out as the Chinese, with a single settler and a scout in the Stone Age. I created my first city on a coast, near some good resources. The first unit I made was a warrior, but that was a mistake. I should have made a scout instead, as it takes only one turn to do that. I sent my warrior and my scout out to explore. I built a worker and started creating a couple of farms. My city’s borders and population expanded slowly. The Chinese architecture with curved roofs looked beautiful.

In my short playthrough, I didn’t get a feel for what made the Chinese unique. But I did get a sense for the action. I ran into barbarians pretty quickly. I was too weak to attack them, and that may have been a mistake. Knowing what I know now, I should have created a strong military force quickly, and pushed out with scouts.

Beach told me that if you run into barbarians and then leave them alone, they will be much smarter and start their own preparations.

“We haven’t talked about this yet, but this is something that I can clue you in on as far as how it’s working,” he said. “Barbarians can generate scouts now. You may have seen some of those around. If you leave a camp around long enough, it generates a scout. The scout explores the map just like you do. But what it’s looking for is targets. If a scout comes up to the outskirts of your city, that means he knows you’re there, and he’s going back to his camp to tell his buddies that they have a target.”

This is a significant departure in how barbarians worked in past Civs.

“It’s important to watch that. You can know, ‘OK, if the scout came from four turns away, it’ll take him four turns to go home and five or six more to build an army.’ But eventually, 10 or 15 turns down the line, that scout reporting back is going to be bad news for you. You can prepare for that, though.”

I created a slinger military unit, which is a ranged attacker. I sent that one south and mopped up one barbarian camp pretty quickly. But in the north, the barbarians multiplied. Three units approached toward my cities. I had to build up my military fast and send my main force north. This took a lot of turns to do, since you can only move one or two hexagons at a time.

By the time I got there, it was all over but the shouting. The Americans had come into the region, and they wiped out the barbarians. I was finally ready for war, but peace had broken out.