Few sci-fi stories are as good as those that question the line between what’s human and what’s not. The tales resonate across media, like with Blade Runner film; the I, Robot novels; the Battlestar Galactica reboot; and the Deus Ex video game series. We’re about to dive back into this theme with the impending launch of Deus Ex: Mankind Divided.

It’s coming out on the PC and consoles on August 23, and it brings back its mechanically augmented hero Adam Jensen. It’s a sequel to the 2011 game, Deus Ex: Human Revolution. That game had cinematic storytelling, but its gameplay had flaws. Mankind Divided aims to fix those problems and to give the story of cyber-humanity its due. If it really works as publisher Square Enix and its studio Eidos Montreal promise, it could be the best game in the series.

Mankind Divided is set in 2029, two years after the events of Human Revolution and the “Aug Incident.” That was when the artificially augmented humans lost control of their abilities and attacked non-enhanced humans en masse. More than 50 million deaths resulted, and a small group of evil people pitted the augs against the humans. Jensen’s job is to shake off all of the suspicion of his augmentations and it to figure out who is behind the conspiracy before a massive genocide ensues. A live-action video of the crisis, as told through a newscast, is emotional. It’s a step up in cinematic storytelling in this game series.

If Jensen fails and chaos takes hold, the world will devolve into a constant state of fear and hatred, pitting humans against augs, and a continuation of the “mechanical apartheid.” It is perhaps among the most compelling of video game stories, and it was so good that Call of Duty: Black Ops III appropriated this narrative. But Human Revolution, as authentic as it was in owning this storyline, was a disappointment to many.

“With Mankind Divided, we wanted to perfect Human Revolution,” said executive director Jean-Francois Dugas, said in an interview with GamesBeat. “Even though it was a good game, I never thought it was perfect. We wanted to balance the experience a bit more, bring a more visceral component to the experience. When you look at Human Revolution, stealth was here and combat was there. They weren’t on the same level.”

Above: Here’s some action in Deus Ex: Mankind Divided.

He added, “When you were stealthy, there were plenty of tools. The way you could eavesdrop on people was a very strong fantasy. When you went into combat, it’s not as if it wasn’t fun, but it wasn’t on the same level. It lacked something visceral, an intensity to the experience. We wanted to emphasize that and make sure combat would be visceral and powerful.”

As I played one of the missions, I could see what Dugas meant. In Dubai, Jensen goes into a mission with a combat team. I started the Dubai mission in a kind of stealth tutorial, learning how to use Jensen’s augmentations to stay in the shadows, sneak up on enemies, and snap their necks without anyone noticing. I did so, solving puzzles, hacking doors, crawling through air vents, and using sensors to detect the positions of guards. That kind of gameplay was fun, reminiscent of the Tom Clancy’s Splinter Cell games.

But as I approached the core of the mission in coordination with a combat team, I started running into larger and larger groups of guards. I tried to fight them and quickly brought a rain of bullets on myself. As I closed in on the final part of the mission, Jensen and his combat team were ready to spring a trap. Instead, they were ambushed. I had to join a massive firefight that involved a big nasty helicopter gunship. As Dugas noted, this wasn’t a stealth mission. It was more like Call of Duty. 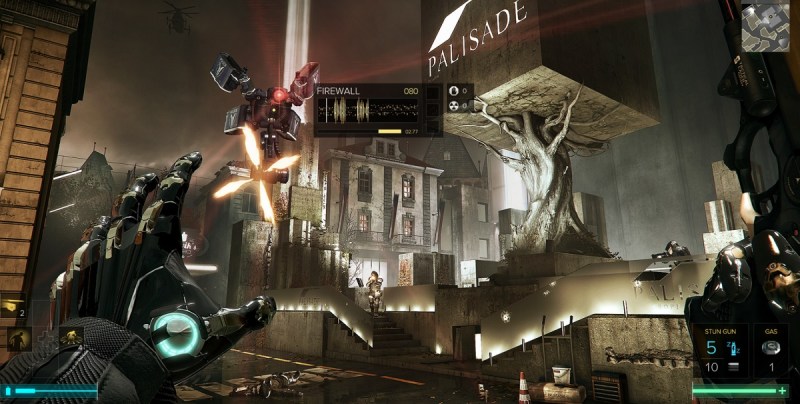 Above: Black and gold is back.

I also saw another mission where Jensen wakes up after a terrorist attack in Prague. He has functional problems. He is in an apartment where he can explore the place and discover some secrets. Then he goes out and pursues a new mission, where he has to get help fixing his augmentations.

Everywhere he goes, thugs ask for his identification. It’s a depressing city under martial law. The atmosphere of totalitarian oppression and discrimination against augs is memorable. You have to find someone named Dr. Koller. Jensen contacts him and finds he needs help because the cops have begun searching his book store. When you get there, you find a bunch of police have barricaded the place.

You have to gain entry and start taking out the cops one-by-one. You have to vertically up into the apartment to reach a character that you’re looking for. I set off a bunch of alarms and had to painstakingly deal with each thug coming my way. This was not easy.

Square Enix also showed off a game mode for multiplayer, dubbed Breach. In it, you have to break into computers in the Palisade Corp. You have to find secrets and expose them. In the Breach, you are viewing things through a faux virtual reality headset. You have to attack the data towers, steal the data, and eliminate cyber enemies who are there to protect the data. The more data you retrieve as a Ripper, the closer you are to bringing the corporations down. You have to locate the data and exit without being destroyed. The A.I. core of the computer tries to stop you, so you must decide whether to go in with speed or with stealth. Breach is part of the release, and it will receive support with new content after launch.

Above: Adam Jensen is back.