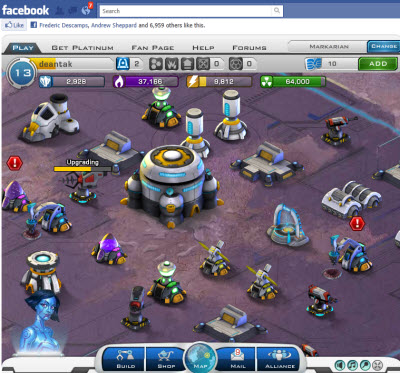 Since the battle of the social game giants has begun, I decided to try out some of the games available on Google+ to see if the newcomer has an edge on incumbent Facebook.

So far, Google+ is working fine. The interface is well-organized and pretty simple. You just click on icons to initiate a game and they’re all pretty self-explanatory. When it comes to the mechanics, user interface or presentation of games, Facebook doesn’t really have any advantages over Google. And so far, Google has done a decent job of getting fun games with variety in its first batch of titles.

Facebook has many more users and a lot more games, but that imbalance will likely be corrected in time. But it will take a long time before Google can match some of Facebook’s more nuanced advantages such as a good recommendation and distribution system.

Google is in the process of rolling out Google+ games to its estimated 29 million users now. With Google+, you get to the games by clicking on a game icon at the top of the Google+ page. (It will appear in the coming days for most of the network’s users). You can see a bunch of choices of games, but so far there are no ads on the landing page or the game page at all —  just a lot of white space. Eventually, Google will make use of that white space; otherwise, they should just set it aside for more game screen space. 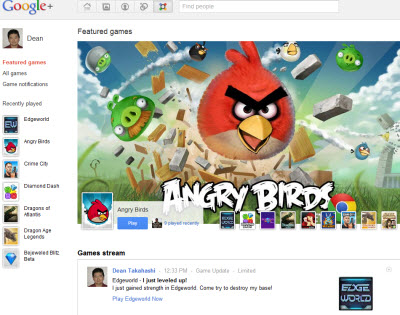 The first thing that happens when you click on a Google+ game is that it asks permission to view basic information about your account, your email address, and view a list of people from your circles, ordered based on your interactions with them across Google. You can click “allow access” or  say “no thanks.” If you say “no thanks,” you can’t play.

There are 16 games from 10 developers right now. Among the participants are Rovio, Electronic Arts-PopCap, Zynga, Wooga, Kabam and a bunch of other well-established players. That shows that Google will likely have no trouble attracting enough content to its game platform, as it makes sense for social game makers to diversify beyond Facebook.

I found that Angry Birds — where you send birds via slingshot at evil green piggies —  was too slow to be enjoyable, when I played with the Firefox web browser. That game happens to be the only HTML5-based game, which means that it is designed to be cross-platform but may run slow in the browser. When a game runs slow, you can’t really figure out the reason why. It could be the developer’s fault, the developer’s hosting company’s fault, or Google’s fault. With the Chrome browser, the game played a lot faster. But the control was still sticky with the mouse, meaning it was hard to grab the screen a move back to a position in the scene. The game is social in that it shows you the score of a friend that you have to beat in order to be the best at a given level. 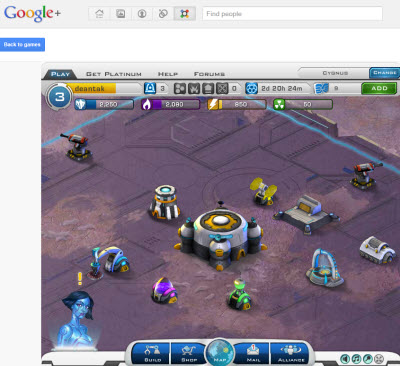 But games like Wooga’s Diamond Dash (a fun clone of Bejeweled Blitz) were quite speedy on Firefox. Graphically, the game is pretty, but it doesn’t require much movement on the screen, so it’s not that big a test of graphics capability. Diamond Dash stalled on me once, and I had to restart it. Still, I didn’t mind since it was pretty addictive. Andy Eddy, another game journalist, taunted me by saying that he beat my score in Diamond Dash.

I decided to play Edgeworld for an extended time since I was already playing the same game from Kabam on Facebook. Kevin Chou, chief executive of Kabam, said his company was working on the Google+ version of the game for about six weeks. The Facebook and the Google+ editions are pretty much identical. As you can seen from the screen shots from both Facebook and Google+, Edgeworld looks the same on either platform. The only difference for now is whether you can find a lot of your friends to play the games with.

I tried out the payment service for buying extra “Platinum” currency in Edgeworld. You can pay real money in amounts of $10 to $400 to get virtual currency that you can spend on items in the game. If you haven’t used Google Checkout before, it asks you to sign up and agree to its terms of service. For my game, it showed me only credit card payment alternatives. Over time, the number of alternatives will multiply. And in the long run, the payment system could turn out to be Google’s competitive advantage. Right now, Facebook charges a 30 percent commission on each game transaction, while Google is charging a promotional rate of just 5 percent.

On Facebook, it’s easy to find lots of friends to play games with. But on Google+, that’s going to be one of the weaknesses at the outset. Chou said that it will be interesting to create brand new games that take advantage of things such as circles, or small groups within your network of Google+ friends. You can now share something with a group, rather than everyone you know, when you’re playing a game.

At some point, it might be fun to use the video conferencing tool, Google+ Hangout, to play games where it pays off to have a lot of collaboration. So far, these games don’t really need that. Google passes the test so far. It can essentially duplicate Facebook’s platform for games and bring over a lot of games that already exist elsewhere. The next test is to see how many games it can get and how the performance works when the games scale to millions of players. Facebook may not be that worried about Google for now, but it definitely has to watch its back because its platform is not so hard to clone.