We’ll find out soon if this is the comeback year for Sonic the Hedgehog.

Sega is launching a demo of Sonic Forces at the Electronic Entertainment Expo (E3), the big game trade show in Los Angeles this week. The game stars the familiar Sonic, but it takes him into the world of three dimensions. The platformer will debut on the PlayStation 4, Xbox One, Switch, and PC this holiday season. I played the demo at a preview event and interviewed Sonic Team chief Takashi Iizuka.

Since the franchise’s launch in 1991, the Sonic series has sold over 350 million games and apps worldwide. Sonic Forces will debut this year alongside Sonic Mania, a classic 2D platformer that focuses on delivering the Sonic that older fans love on a variety of game platforms. And I have to say that the 3D Sonic is better.

“There are two big things we’re trying to do. With Sonic Mania, we’re making a game that touches on the nostalgia of when you grew up playing the 16-bit Sonic games,” Iizuka said. “We wanted to make a classic game that stayed true to that classic design, classic look and feel, and provided that to fans who enjoyed the Genesis version of Sonic the Hedgehog. But it’s not just a classic game. It’s making something new and exciting that fits in that classic package.” 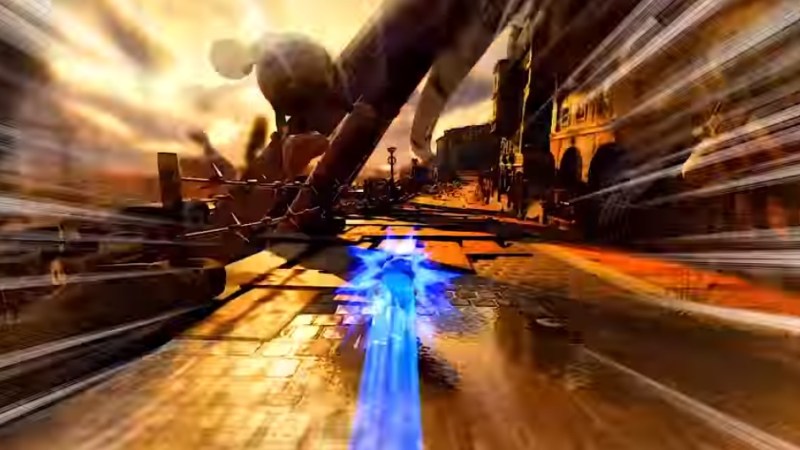 Above: Sonic is a blur.

Sonic Forces is a sequel of sorts to Sonic Generations, which came out in 2011. That game switches between modern and classic versions of Sonic. The classic levels in that game are like Sonic’s 16-bit games on the Genesis. The modern levels switch between 2D and 3D perspectives.

I played a level where Sonic races through a city with a lot of angry robots. You can use a speed boost to zip past enemies and take them out. You have to deal with a bunch of big globe-like enemy robots that are rampaging through the burning city, which has been set ablaze by even bigger robots.

Sega also lets you create your own playable characters that you can insert into the game. You can use the custom characters in both 2D and 3D levels. You can choose among animals such as a wolf, rabbit, cat, dog, bear, bird, and hedgehog. Your characters will even appear in the cutscenes. 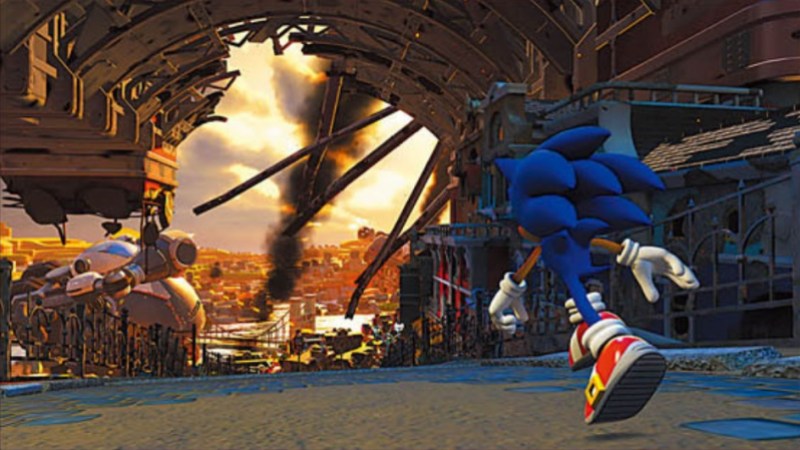 Above: Sonic has to save a burning city.

“For Sonic Forces, we realized that a lot of people have played a lot of different games over Sonic’s history,” Iizuka said. “Sonic Mania would be a game for people like me who grew up with the Genesis version, but at the same time, a lot of people enjoyed playing the 3D modern Sonic games. Sonic Forces is the answer to what those people are looking for — a modern Sonic game with fast, exciting gameplay like Colors and Generations. This is a game for them. For the first time, we’re including a customizable character, one that players can design themselves and bring into the world. They get to take that character they made and go on an adventure with Sonic.”

The 3D game uses the Hedgehog Engine 2.0, which delivers better 3D effects such as realistic textures, realistic lighting, and the shine of reflections off water. And whether it’s 2D or 3D, the game is fast, and it requires fast reflexes and button-pushing skills. I like the look of the 3D game better than the 2D, if only because the background catches my eye more often because it’s so beautiful.