Abzû is one of the prettiest and most mysterious games coming for the PlayStation 4.

The underwater exploration title is unlike many of the boring “undersea adventure” game that we’ve seen in the past. I have high expectations in part because of the pedigree of its principal creator, Matt Nava, founder of the new studio Giant Squid.

Nava has been laboring on Abzû with a small team of about 10 people for three years. Before that, he was the art director on Thatgamecompany’s acclaimed games, Flower and Journey. Journey was one of the best games of 2012, with beautiful sand dunes and mountain snow. The title shows that some of the most imaginative and original titles still come from independent game developers, even in the console industry.

I’m pretty certain that Abzû is going to be one of most beautiful games at E3. I played it for a couple of levels, and I found it soothing, serene, mysterious, and sometimes scary. The title is coming soon for the PlayStation 4, and will be published by 505 Games. 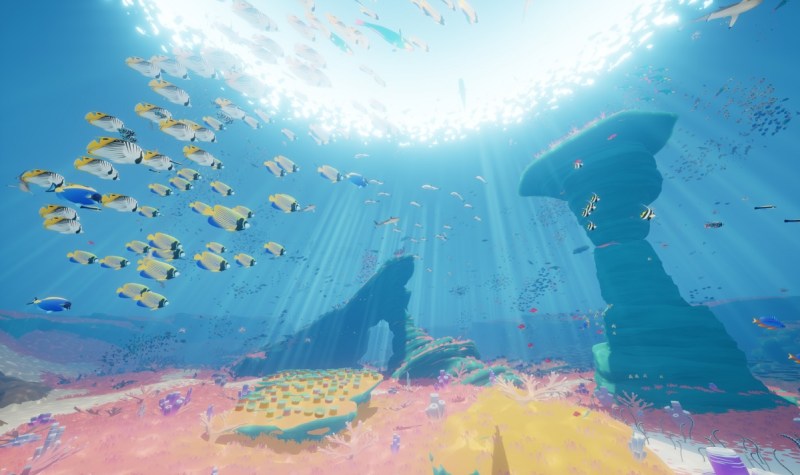 The ocean, of course, is all of those things. And Abzû does a fantastic job of simulating it, without simply trying to reproduce a video view of the ocean. Abzû has stylistic art that gives you a sense of moving around in three dimensions. The lighting and colors are spectacular.

“When I went scuba diving, it’s very technical with all of this equipment and these gauges,” Nava said in an interview with me. “But in the end, you don’t care about that. You want to transport yourself to another world. We wanted to capture that feeling.”

He added, “With Journey, it was a solitary experience. This is the opposite. With the undersea creatures, this ocean is full of life, with thousands of characters.” 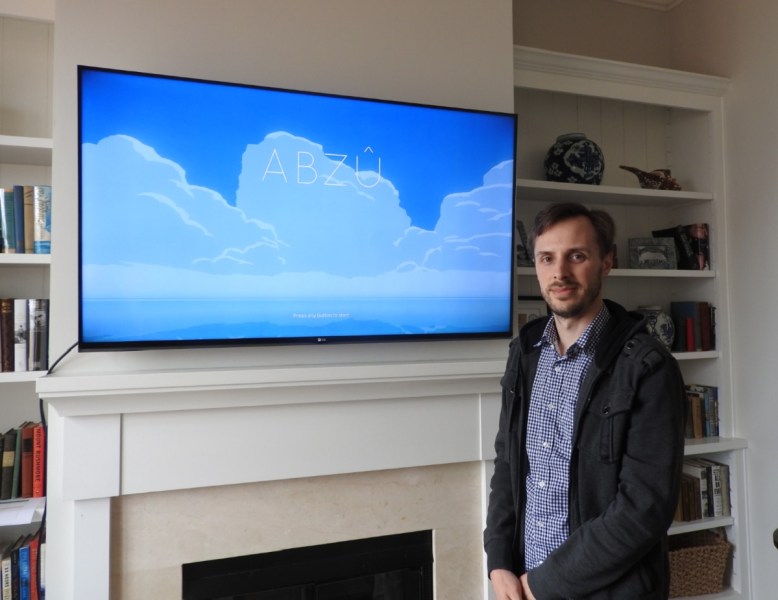 Above: Matt Nava is cofounder of Giant Squid, creator of Abzu.

Austin Wintory, the Grammy-nominated compose of the music for Journey and other games, composed music that helps set the mood, whether its whimsical, peaceful, or dramatic. The pace of the music matches the speed of the motion on the screen.

It starts with a shot of a diver, floating prone in the ocean. The diver awakes, and then you take control of the masked person. You can use the PlayStation 4 controller to maneuver in a fluid fashion. You can easily do flips, turns, and dive deep. It’s hard to tell because of the wet suit and the mask, but the diver is female.

“She discovers who she is, and her fate,” Nava said. 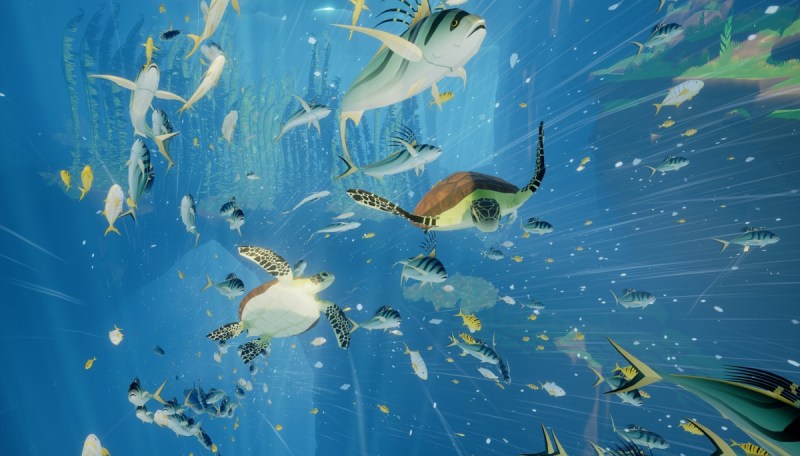 Above: Abzû is coming from 505 Games and Giant Squid this year.

As for underwater games, Nava did his research.

“Most are not fun,” he said. “You can have a full range of motion underwater. It is fluid and acrobatic. The world is dynamic. You can push through the kelp and it moves.”

The ocean has a tremendous variety of fish. They are simulated independently, and the naturally form into schools. Each scene can have tens of thousands of fish. Those fish act on their own to stay away from walls, align with their neighbors, and avoid predators.

As you swim around, you’ll find a drone buried in the sand. You can repair it, and it becomes your companion. The drone will lead you to places, including the next level. Nava says you can wander around and explore as much as you like. Since last year, the team added a “meditation mode,” where you can sit down on a rock and just watch the different fish move by. You can check out a fish close up and see what kind of fish it is. When you are done, you can exit the mode and swim around again.

If you get close enough to a big fish or a turtle, you can grab on to them and go for a ride. That gives you a greater sense of speed. But the fish will look out for its own interests, particularly if it’s hungry and wants to each smaller fish. You can even ride on a giant blue whale. The food chain works naturally, with the sharks going after smaller fish. 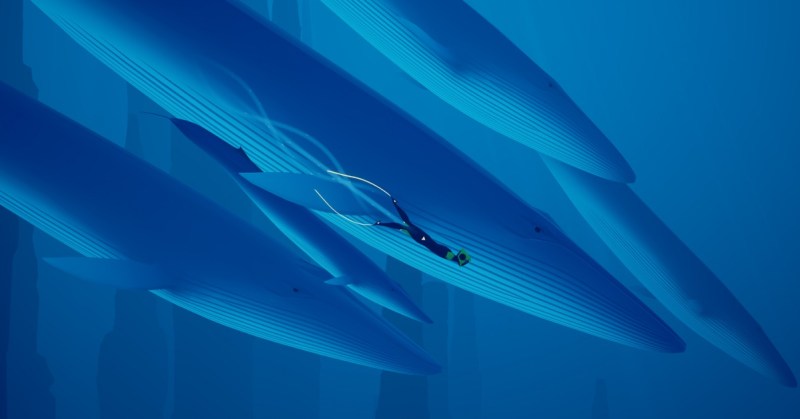 Above: You can ride on a blue whale in Abzû.

You can come upon new places such as a jet stream, where tracers indicate the fast motion of the water, giving you more of a feeling of the 3D depth of the world.

Cinematic scenes unfold when you and your drone find a path into a new level of the game. When you pass through these gates, you see another piece of the story unfold. You’ll quickly find that not all is beautiful. The darker regions of the ocean can be scary, and dangers lurk, such as the great white sharks. The story is mysterious in part because it is told visually, without words. You have to interpret what the different clues in the mystery mean.

“I wanted to make a really moving experience based on a visual story with Abzû,” Nava said.

From what I’ve seen so far, this game is succeeding with that combination of visual beauty and storytelling. I’m looking forward to seeing more of it. Check out our video interview with Nava below. 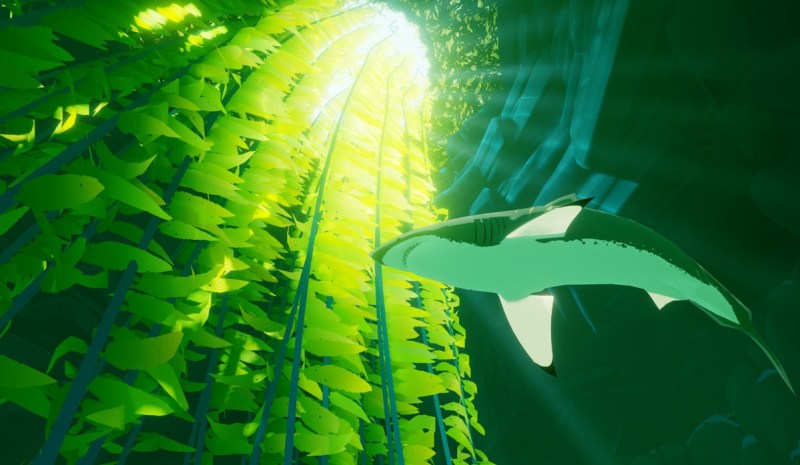 Above: Look out for the shark in Abzû.