Virtual reality has a long way to go before it feels like reality. The visual part is getting more immersive with the new VR headsets, but things like the sense of touch are missing. Heather Culbertson hopes to change that.

“That’s what we focus on in this lab, a way to create hardware and signals that make haptic interactions feel natural, mimicking what you feel in real life, said Culbertson, who is an assistant professor of computer science, aerospace, and mechanical engineering. “With this device, it’s a set of voice coil actuators. These are capable of playing vibration. They’re essentially speakers.”

As Culbertson described it, I felt something like a soft touch moving up along my arm. She said it was a “pleasant sensation on the arm, a soothing, stroking sensation.”

No, we’re not going to start imagining what this could mean for virtual sex. It’s not going in that direction. Rather, the lab is looking to improve social VR, like when you tap someone on the shoulder to reassure the person. She calls it social haptics. The sense of touch can be surprisingly effective at things like decreasing depression or reducing stress.

Culbertson has been working on the tech since January, when she joined USC. Before that, she worked on it with colleagues at Stanford University. 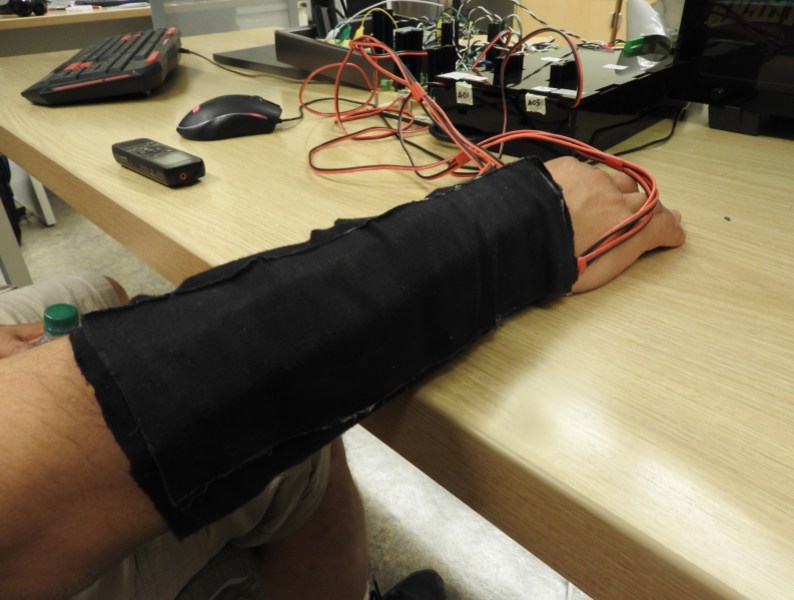 Above: Dean Takahashi tries out the haptic armband at USC.

VentureBeat: Tell us what you have here.

Heather Culbertson: We’re in the department of computer science and we deal with everything that has to do with the sense of touch. Right now I have two Ph.D students and three master’s students, and one undergrad for the summer. I just started here in January, so we’re still ramping up a little bit. We’re exclusively working on haptics and human-computer interaction in this lab.

We have a couple of devices we’re building around here. We’re going to demo this one here. Specifically, it’s dealing with social touch. We’re trying to create a pleasant sensation on the arm, a soothing, stroking sensation.

If you think of haptic devices up until now, they’ve been very—kind of annoying, almost? Buzzing, not feeling very natural. That’s what we focus on in this lab, a way to create hardware and signals that make haptic interactions feel natural, mimicking what you feel in real life. With this device, it’s a set of voice coil actuators. These are capable of playing vibration. They’re essentially speakers. We can play vibration through them, but we actually use them to display motion. They move up and down by a couple of millimeters. We use this to create that pleasant stroking sensation on the arm.

With this project, we’re coming up with a way to use haptics to convey social touch cues from one person to another. If you think of Skype or other interactions online, that’s limited to video and audio now. But when we’re interacting face to face, you begin with a handshake. If you’re talking to your family you might have a pat on the back, a sympathetic touch on the arm. We want to convey those very natural, very common social touch interactions. This device is a way to create those stroking sensations, because those are very common in creating and displaying sympathy or sadness or love.

These are going to move up and down, one at a time. We call this a sequential normal indentation. We’re creating the illusion of motion. Because creating a device that has a long lateral motion is very difficult. Instead we create that illusion of motion by indenting on your arm one at a time, and then we control how we actuate them, how long a delay we have between them. You can see we have a wave that passes down. When you wear that on your arm it’ll feel like something stroking your arm.

We could definitely use this in nursing homes or the homes of elderly parents who want to create a calming sensation, or just a social presence as part of communication, that social touch that they’re not receiving. Research has shown that not receiving these social touch cues, not receiving touch at all, can lead to a sense of isolation amongst individuals. We’re planning on working with elderly individuals, people with anxiety disorders, and others. 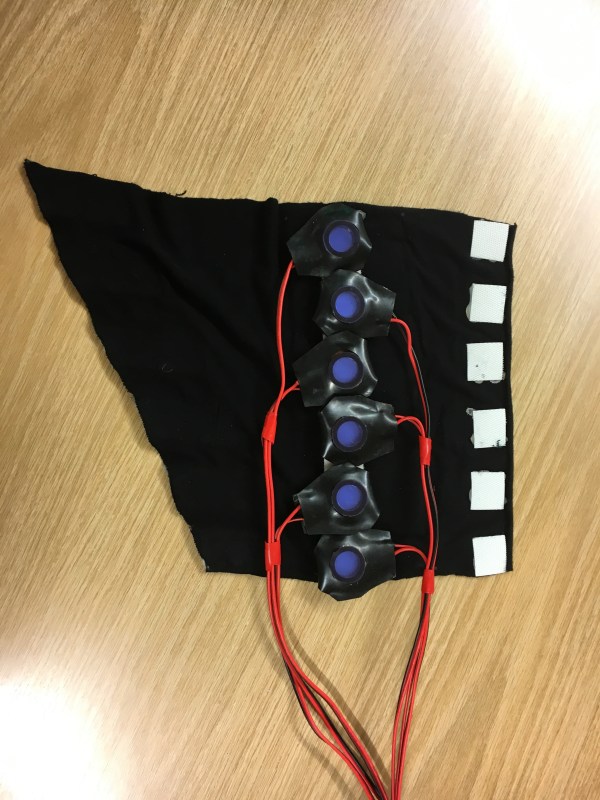 Above: The haptic armband prototype has six little speakers that simulate touch.

VentureBeat: Is this going back and forth, or just one direction?

Culbertson: We can change the direction. For this demo, it just goes in one direction – it only goes one way at a time – but we can switch that direction and it’ll go back the other way. By changing the actuation parameters, we can make it go faster. We originally created this device for that stroking sensation, but we can also, using the same kinds of motions—we have pulse width, which is how long it takes to indent, and then the delay is the percentage of time between when one starts indenting and then the next. We can make it go faster and provide something that isn’t as pleasant, but we can provide, say, directional cues. With a really high delay we can make it very discrete, which some people feel as something crawling up your arm.

We originally created this device for social interactions, but we can change around the parameters and use it in VR scenarios to create different sensations. You could wear this in a game and feel a bug crawling up your arm. People have said this one’s pretty creepy.