Get ready to rock again later this year.

Harmonix answers three years of fans requests with the announcement of Rock Band 4 today, slated to Xbox One and PlayStation 4 later this year. The Boston, Mass.-based developer made good on their promise to return to the franchise, though it hasn’t said much about what to expect from the new music game. We do know that the gameplay will be similar to previous titles, but it will feature new team play concepts as well as features that will encourage creativity in players.

Rock Band 4 product manager Daniel Sussman told GamesBeat in an interview that Harmonix is “not interested in a straight port of Rock Band 3,” as it wouldn’t be interesting to fans. The company wants to retain the core gameplay of previous titles, and says that it is “building on a foundation of very well-established gameplay that we think is really quality.”

Harmonix hopes that fan input will help shape Rock Band 4. Through feature and content updates, it will expand the core Rock Band gameplay.

“Our plan is to grow the game though a dialogue with our community and with our player base to figure out where they want to see it go,” Sussman said. “I think that there’s a real opportunity this time around through the technology and tools that we have at our disposal to be pretty reactive to the player community and to respond directly to what people are excited about.”

There are a couple of areas of creative focus for the company for this new title, centering around player-to-player dynamics. Sussman says that Harmonix wants to improve the band simulation aspect so that a four-player session isn’t just four people playing a single-player experience together. He hints that new features will encourage interplay between instruments, so that, for example, a bassist and a drummer might do something together that is impactful.

“It’s so much more fun to play music with people that you know are listening to you,” Sussman hints.

He also hints that “a song doesn’t play the same way twice.” It seems that Harmonix is building in opportunities for self-expression, giving players an opportunity to feel a sense of ownership in the music that is coming out of the game.

The music plays on

Harmonix plans to honor fans’ past purchases for previous series titles. This means that the company’s goal is for the entire Rock Band downloadable music library will work with Rock Band 4. Sussman says that the task has been complicated as the franchise’s library features thousands of songs. But he says that Harmonix respects fans’ past purchases and it is currently working with Microsoft and Sony to make sure song purchases from previous games will work in the new title.

“Our focus on the DLC back catalog and entitlements is a big thing,” he said. “We know that folks have spent a lot of scratch on [them] and we want to make sure that we respect that.”

Sussman says that the time between the last game and now serves as an opportunity to look back at some of the last three or so years of music. He says that the team has been taking advantage of that.

“We are committed to putting together a forward-looking DLC plan that continues the tradition of exposing people to both new music, and also cherrypicking some of the great stuff that’s out there.” 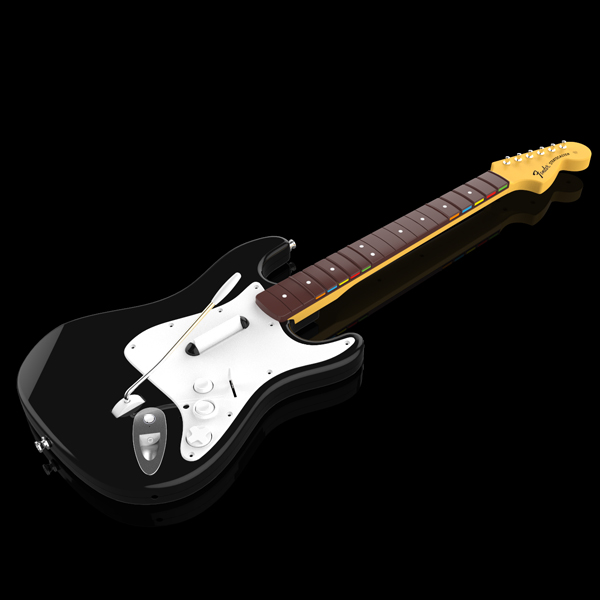 Harmonix also plans to make the musical controllers from previous games compatible with Rock Band 4, though Sussman admits that there are still some challenges that Harmonix has to overcome before launch.

“Our intent is to support everything that is out there,” he said. “But there’s a big part of that that’s outside our control. On a hardware front, frankly, the first parties control the situation  — there is a lot of tech and policy that we’re working through.”

He explained that some of the issue is connectivity. For example, the radio that has controllers wirelessly communicating with a game system are completely different in the newest generation of consoles. But Harmonix is doing its best to work it out.

“We have a really active and constructive dialogue in play with Sony and Microsoft about how we might support last generation controllers on this generation,” he noted. “Those conversations are going really well.”

Harmonix is working with Mad Catz once again to provide hardware for Rock Band 4. Sussman says that the hardware maker has a strong pedigree within the music game genre, so Harmonix has chosen the company as the exclusive hardware partner for its next game.

A new suite of controllers will mirror the form and function of previous controllers. Because Harmonix is committed to legacy controllers, it didn’t want to incentivize a player to buy new hardware. The guitar will be a Fender Stratocaster replica with the same layout of buttons and controls. Other instruments should be similar to their predecessors, though the company is taking the opportunity to upgrade some of the components.

More to come at E3

Harmonix says that it is not ready to talk about pricing and SKU configurations just yet, let alone a solid launch date. But Sussman does note that the company wants to bring to market a product that makes sense for both retailers and players.

The company will reveal the gameplay of Rock Band 4 at this year’s E3 Expo.