Harmonix hopes that Chroma will be a groundbreaking game that combines music with a first-person shooter video game. It is a wonderfully creative, experimental, but very risky title that will throw video game fans for a loop. Chroma could be one of the craziest games ever created. 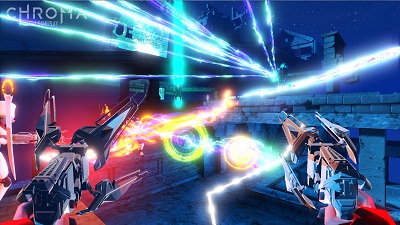 The game is the brainchild of a studio that pioneered music games like Dance Central, Rock Band, and Guitar Hero. If any game studio can pull off a music-driven shooter game, it’s Harmonix. But that’s a big if. I tried out a preview version of Chroma, and it isn’t intuitive. You have to marry your own ear for music with your instincts for shooting everything that moves in a combat game.

If you have a good sense of rhythm, and you’re also a good shot, this game will be a lot of fun. You can be like a rock guitar sniper. But if you have a tin ear, it will probably be very hard, and the people with musical affinity will be able to run circles around you in this game.

Cambridge, Mass.-based Harmonix acknowledges the free-to-play, multiplayer game isn’t perfectly tuned yet, so it is launched a limited closed alpha test today so that it can incorporate fan feedback into the design of the game, which will debut on the PC.

Harmonix is making Chroma in conjunction with Hidden Path Entertainment, the developer of games such as Counter-Strike: Global Offensive and Defense Grid: The Awakening. The game is meant to be a reimagining of the classic arena-based first-person shooter. It combines fast action with music-driven game play. For instance, if you shoot a grenade, it will bounce on a beat and you can detonate it on a downbeat for greater effect.

If that sounds crazy, it is. But Harmonix is known for taking risks. The company is also making a gesture-based control system for its upcoming Disney Fantasia: Music Evolved video game. That title, and Chroma, are unlike any video games that have been created before.

“Chroma has been a dream project of mine for some time,” said Harmonix co-founder and CEO Alex Rigopulos. “Watching the teams at Harmonix and Hidden Path begin to bring this vision to life has been tremendously exciting. We’re also thrilled to release an alpha version of this game and to evolve it in collaboration with our players. We can’t wait to hear what people think of this new approach to both first-person shooters and music games.” 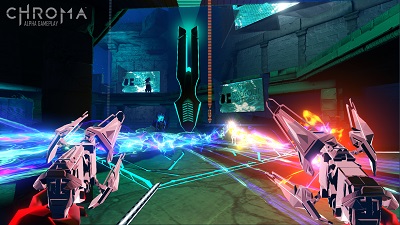 The game uses the high-end Unreal Engine to produce visuals that are like something out of a laser light show. In the demo I saw, players split into a red team or a blue team. The music, which is normally part of the background noise, was front and center. As the beat changed or players hit their targets, they could cause the terrain to change dynamically. For instance, a building could rise under your feet and give you a sniper’s perch.

“Truly new experiences in video games are very rare,” says Mark Terrano, chief creative officer/founder of Hidden Path Entertainment. “At Hidden Path Entertainment, we were delighted to help Harmonix realize their dream of a musical shooter and are looking forward to the next step – seeing it continue to evolve with the energy, input, and creativity from the game community!”

Harmonix is taking applications for a limited closed alpha test. Those players will get an early look at Chroma while it’s still in development.

The game’s soundtrack will be directly relevant to combat, traversal, and unlocking key features. Music is your weapon in the game, and it is woven into the ever-changing landscape. You can choose a weapon that conforms with your musical style. You take your sounds into battle, and your team is the equivalent of a band.

The game has terrain that shifts at certain points of “change up” in the music in a song. You can use music to raise cover and keep a sense of rhythm in your firing. The game will be free-to-play, but you won’t have to pay to win. You can customize your character and weapons.

Chroma is still in its early stages. It has been under development for around four months with a team of 30 at Harmonix and a smaller team at Hidden Path.

Harmonix showed off a level where music is meaningful to everything that happens. If you jump on a downbeat, you get to leap farther. There are five character classes, like a character with a submachine gun, a sniper, and another that is dubbed a Tank.

The engineer is the one that depends most heavily on “beat matching,” or striking a button on a controller to simulate a guitar stroke as a note moves by on the screen. The engineer’s main weapon is a “dual pistol,” where players must fire by properly executing a two-lane beat match pattern. If you hit the buttons in the right pattern, the dual pistols will lock on enemy targets and fire repeatedly at them. Patterns will repeat with the music, so once a player understands a pattern, there will be no need to sight read notes on the fly.

The engineer’s second weapon is the shotgun. It has a beat match pattern that you have to execute in order to fire the gun most effectively. 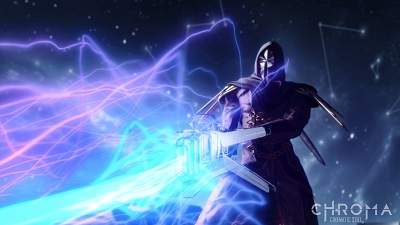 Another class of player is the Sneak, a stealth fighter. She uses a sniper rifle which can be fired at any time. But to inflict maximum damage, the player has to focus on firing on the downbeat, which enables a one-shot kill. Her secondary weapon is a Streak Pistol. If you fire it on the beat with the pistol, you can build up a multiplier that does more damage.

The last character was the Support class fighter. She can heal teammates by locking on a friendly target, restoring health and providing a layer of shield.

You can play eight players versus eight enemies. With that many players, each one brings his or her own music to the party, layering on a bunch of music.

The challenge in that kind of environment is to make the music sound like more than just a bunch of noise. Harmonix hopes the game will feel like second nature once players get over the learning curve. It will be hard for players to shoot, run, and match the beat at the same time. In the match I played, my team had to take control of a bunch of points on a map.

In the first round of combat, I played a soldier with a submachine gun and I got zero kills. In the second round, I played a Tank with a rocket launcher, and I got 12 kills. If you use that weapon with the right music beat, you can shoot heat-seeking missiles. I had a lot of difficulty staying on the beat and firing the heat seekers. But I did just fine without them using unguided rockets. Of course, that kind of defeated the purpose of using music in the game.

The game has no single-player version, but there will be some narrative to the multiplayer levels. Expressing your musical personality will be important in the game. More game modes will be added over time.

A public beta test will start later this year. Chroma will grow with new content. General availability is expected to be this fall on the Windows PC via Valve’s Steam digital distribution platform.

One of the challenges is that the game will be eight players versus eight. That means the sound generated by each player will be layered on top of the others. That could very well result in a bunch of incomprehensible noise during the height of the game’s action. Harmonix is aware of this problem and is trying to do things to mitigate that problem, like making sounds “geo spatial,” where players on the far side of the map from you can’t be heard. 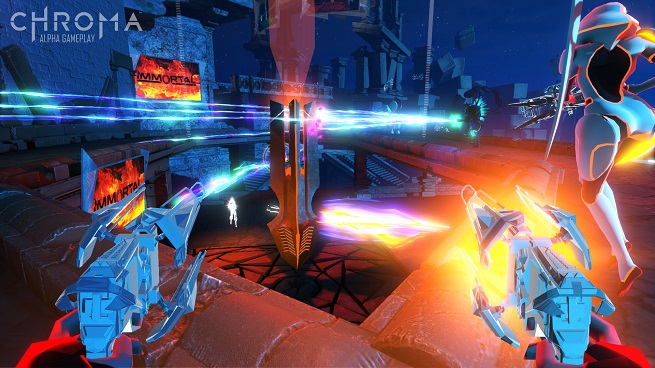