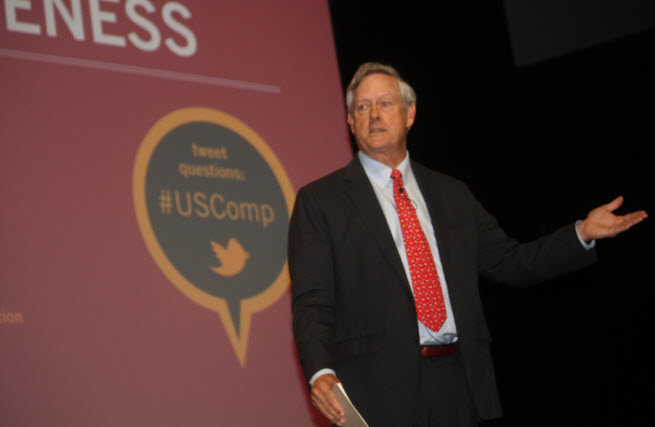 A trio of Harvard Business School professors made a stop in Silicon Valley to warn that the economic competitiveness of the United States is lagging behind other countries. Their message was laced with hopes that entrepreneurship will save the country, but the facts they carried with them would depress members of any political party.

It’s no secret that the professors are raising the issue of competitiveness just before a presidential election. But their message, based on reports created over the past 18 months by 15 Harvard Business School professors, wasn’t partisan. In an October 2011 survey of 10,000 HBS alumni across the economy, about 71 percent of respondents expect U.S. competitiveness to decline over the next three years, with workers’ living standards under greater pressure. About 1,700 of the respondents had to personally make decisions about whether to leave the U.S. for jobs overseas.

In Silicon Valley, optimism rules, particularly compared to places such as Detroit. But Jan Rivkin, a professor of business administration at Harvard, made the case that America has a structural problem. From 1975 to 2001, the U.S. created jobs at an annual rate of 2.7 percent of the job base per year. But in the past decade, job creation has been flat. Real household income has taken a dip.

“What we’re seeing in the U.S. is not just a cyclical downturn followed by a slow recovery,” Rivkin said. “It is not just the hangover of the financial crisis. It is addressable, but if not addressed, it will hold back the American economy for a generation.” 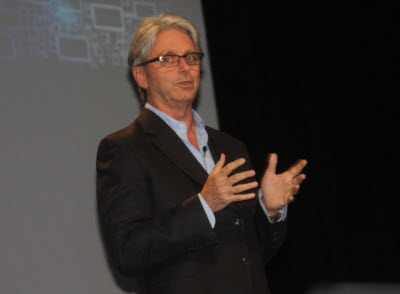 John Riccitiello (pictured right), the chief executive of Electronic Arts, welcomed the Harvard Business School panel on U.S. economic competitiveness to his campus in Redwood City, Calif., with a little cynicism toward politicians.

“Every CEO in Silicon Valley cares about U.S. competitiveness,” he said. “Frankly, I see U.S. competitiveness slipping. It frustrates me as a U.S. CEO to see politicians decry the movement of jobs offshore and unemployment on a 90-day basis every four years, when the rest the time our policies seem to push jobs offshore for the rest of the time we work. Whether it is tax policy or immigration policy, we’d like to hire people here but the policies push them back overseas.”

Riccitiello said that the education gap has become “amazing” and that the U.S. graduates a small fraction of the number of engineers that graduate in China. He said EA will likely hire 5,000 engineers by the end of the decade, but it cannot accomplish that by hiring solely in the U.S. because there isn’t enough talent here. 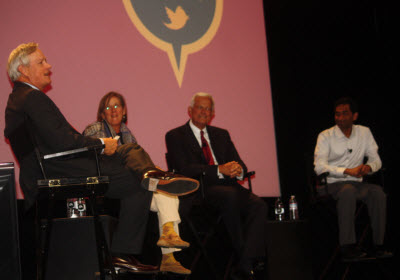 The professors concurred with Riccitiello that the state of K-12 education was in a sorry state. Much of the blame falls not only on education but the U.S. tax code, political system, structural deficits, the costs healthcare, manufacturing policies, and immigration issues.

Willy Shih, a Harvard professor of management practice, said that manufacturing is a key sector, even though it accounts for only 9 percent of jobs, compared to 27 percent in 1950. He said that it pays to have manufacturing in the country, close to the researchers and engineers who create products, because there is a lot of innovation that takes place in creating the process for manufacturing goods. On top of that, manufacturers who make goods here are dependent upon a network of suppliers who also create nearby jobs. Intel is one of the companies that has local U.S. manufacturing, tied closely to research on manufacturing processes. It’s no secret, Shih said, that Intel is the world’s largest chip maker and it has a year or two edge on its rivals in manufacturing processes.

“Innovation requires access to manufacturing technology,” Shih said. “This is not about being patriotic. It’s a strategic question.”

The consequences of losing manufacturing can be dire. In the 1970s, few people were alarmed when U.S. tech manufacturers moved the assembly of consumer electronics goods such as TVs to other countries with low labor costs. But when those jobs left, so did jobs in related areas, such as the creation of batteries. Now, battery technology is extremely important in the design of electric cars, but you can’t source batteries for those cars in the U.S. Shih noted that the Chevy Volt electric cars he saw in EA’s parking lot use batteries that are made overseas.

The measure of competitiveness, Rivkin said, depends not only on the growth rate of the American economy but also on the standard of living for the nation’s workers. The U.S. needs to keep spending on basic research, and it needs to match that spending to the size of the problems it is tackling. Diabetes accounts for about $225 billion in healthcare costs, but the National Institutes of Health spends about $30 billion on medical research, said William Sahlman (pictured at top), professor of entrepreneurship at Harvard.

The U.S. has many things going for it, like a tolerance for risk and a culture that views failure as experimentation, rather than a crime, Sahlman said. Shantanu Sinha (pictured above, far right), the president and chief operating officer of nonprofit education firm Khan Academy, said he was optimistic about the ability to use technology (such as videos hosted on the Internet) to provide free education to everyone and to disrupt the traditional educational environment. The academy has more than 6 million visitors a month from every country in the world.

“We want everybody to have access to the same educational materials,” he said.

Mary Meeker, a general partner at Kleiner Perkins Caufield & Byers, said, “The U.S. government has only made money for five of the last 45 years. If this were a company, would you invest in it?” She added that 60 percent of the budget goes toward entitlement programs. She is excited though, that 30 percent of U.S. households have an e-book reader or a tablet.

“I believe the day is darkest before the dawn,” she said. “With the rising availability of those devices, people can learn whatever they want wherever they want.”

Kevin Sharer, the former CEO of Amgen, said he believes the U.S. is still the leader in biotechnology, with more than 90 percent of the world’s biotech industry market share. He believes that the regulation of the industry is reasonable for the most part. But he worries that the huge deficits and unfunded liabilities in Medicare, Medicaid, and Social Security will siphon off resources that the biotech industry and other industries need to continue to be competitive.

Sahlman said healthcare is 17.6 percent of the economy. We spend $8,000 per person on healthcare, $4,000 more than many other developed countries, and we don’t have outcomes that are better than other countries.