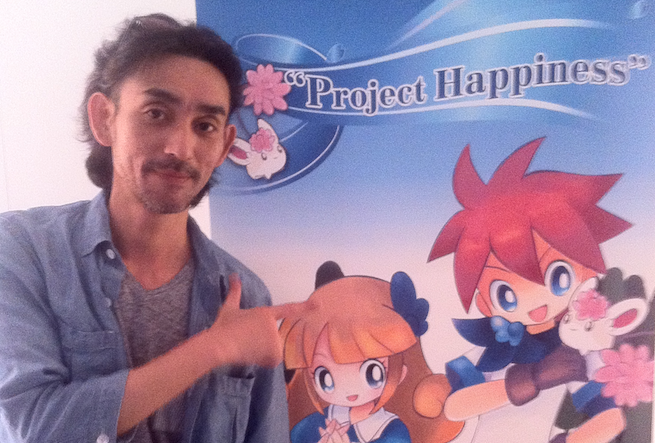 Yasuhiro Wada wants to make something new. The idea for his latest game, currently known as Project Happiness, came because the Harvest Moon creator feels that he has come up with every idea that he can for the series.

“I wanted to create something very different from Harvest Moon,” said Wada in an interview with GamesBeat at the Electronic Entertainment Expo (E3). However, as he worked through the development of the new title, he realized that much of Harvest Moon comes from who he is. “I like nature, animals, and caring for other people, so the atmosphere of this new game is similar to Harvest Moon, but gameplay will be very different,” he said through a translator.

Natsume president and chief executive Yasuhiro “Hiro” Maekawa, who was also present at the interview, added, “Now, we’ve known for many, many years that we [he and Wada] have something in common in our way of thinking, and that’s what we like: to make people happy. That came with a new idea, Project Happiness,” said Maekawa. “It’s the same world, similar, but the gameplay is now different.”

Project Happiness is about running a shop. It takes place in the Harvest Moon universe. Players will manage their stores, take care of animals, and interact with the villagers in their towns. Their interactions directly influence how their shops change as they grow. Each of the townspeople will have his own backstory and personality.

“You have some items that are very important to one villager. You have some items that are important to another villager. And having all these items in the shop creates the opportunity for these villagers to interact with each other as well as you,” said Wada. “The village will begin with around 10 people and eventually grow to around 30.” Beyond those 30 characters the game focuses on, 100 total non-player characters will populate the game. Which denizen you encounter changes depending on how you play, according to Wada.

Players are also given one of seven wishes to fulfill throughout the course of Project Happiness. How they interact with the people in their towns influences when or if they get their wish.

Wada has gone on the record as saying that his favorite Harvest Moon game is 2003’s A Wonderful Life for the Nintendo GameCube because it best represented what the series was originally supposed to be about: “leading a full and happy existence from beginning to end.” The connection seems apparent in the name Project Happiness. Still, Wada wants his players to find their own happiness in his games.

“The concept of happiness depends on how you see it, and I’m not going to say this is the ‘correct’ happiness you have to feel,” explains Wada. “I want the players to find their own happiness by playing my games.”

When asked about whether social networking games on Facebook such as FarmVille have influenced his work, Wada’s answer was a direct, “It’s not. It’s not influenced at all by Farmville’s social aspect.” However, Facebook is not something Wada is opposed to.

“If I ever did make a Facebook game, it wound’t be a real-time game, but it would have multiplayer,” explained Wada. “What’s on Facebook, that I see, is giving gifts, but I would like to make something different. I have a few ideas.”

He would like to see something that does not notify players of gifts or crops ready to harvest so that when players open their games, they have surprises waiting for them. “At first, you wouldn’t know who sent you a gift, but as you play, you would figure out, ‘Okay, who sent this? Who did something nice for me?’ And as you play, you’d eventually be able to figure out which friend did this.”

“I don’t really like the idea that you receive so many requests from your friends on Facebook. I’d want to create something different,” he said.

That was the same idea that brought on Harvest Moon. Really, why did a farm simulator seem like a good idea 15 years ago?

“Because I didn’t want to copy anybody else,” Wada said. “I wanted to create something that nobody had ever done.” It paid off.

After 15 years, Harvest Moon is still his baby. He compares it to a child who has grown up. It’s time to set it free, but he will continue to support it and help it grow alongside his new child. He reassures us that Natsume will continue to release Harvest Moon games for years to come, and the two will coexist.

For Wada and his team, much of what has come in the way of Harvest Moon is thanks to how fans react and comment on the series. This is how he and his team have kept it alive and fresh for so many years while still retaining the core concepts.

But for the time being, Wada can’t think of anything that he hasn’t implemented into the series already.

“What one human can think of in their mind is very limited,” Wada said, “I feel I’ve done everything I can do for Harvest Moon, and I felt the need to come up with new ideas, which motivated me to do Project Happiness.”

Project Happiness will arrive on various handheld platforms in early 2013, though, no date or systems were specified.