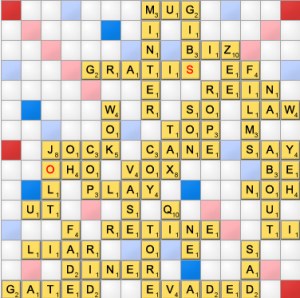 The toy maker, which owns the Scrabble board game brand in the U.S. and Canada, also asked Facebook to take down the popular application under the Digital Millennium Copyright Act.

Mark Blecher, a general manager at Hasbro’s game division, said in a phone call that Hasbro waited until Electronic Arts had a version of EA Scrabble ready for fans to play. (Hasbro owns the rights and has contracted with EA to make video games based on Hasbro properties). EA launched the beta version of its game last week and expects to have a final version soon. Blecher said that Hasbro began talks with Facebook earlier this year about the infringement but deferred its lawsuit because so many fans wanted a game to play. As long as EA Scrabble wasn’t ready, Scrabulous was the only choice on Facebook. Mattel owns the international rights to Scrabble and Real Networks has the rights to make an international video game based on Mattel’s international rights.

Scrabulous was created by two brothers in India, Rajat and Jayant Agarwalla. The suit, filed in U.S. District Court in New York, also names RJ Softwares. Scrabulous took off because it was an easy way for friends to stay in touch and socialize via Facebook. Players could play the game asynchronously, one turn at a time, so that it didn’t matter if the other player was online or not. Fans were ready to revolt when they heard that Scrabulous might be taken down. But Blecher said he expects fans to migrate to the EA version.

Right now, Scrabulous ranks 11th on the list of most active Facebook applications. The game has 512,961 active daily users and 3.9 million installs, according to Adonomics. Daily users is actually down from the peak, Adonomics shows.