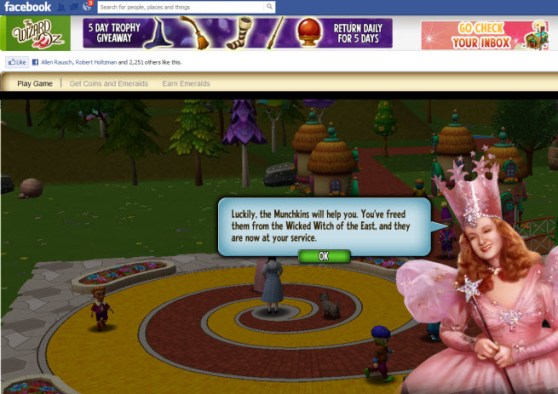 Media giant Hearst Corporation has announced today that it has made a minority investment in Spooky Cool Labs, a social game studio that just released its Wizard of Oz game on Facebook.

It did not disclose the amount of the investment. But this remains interesting, as Hearst is a big media corporation without a lot of holdings in the game business today. It owns 15 daily and 36 weekly newspapers (including the daily San Francisco Chronicle and the Houston Chronicle), and it also owns 29 television stations and hundreds of magazines. But this is one of those rare instances in which a game company fits its definition of media and entertainment. It’s definitely a case of old media becoming hip to new media.

Word on the deal came from Frank Bannack, the chief executive of Hearst; and Scott Sassa, the president of Hearst Entertainment & Syndication. Spooky Cool Games is in Chicago. Its founders are video game veterans Joe Kaminkow and Larry DeMar, who once worked at storied arcade game giant Williams. Spooky Cool Labs is trying to push the boundaries in social games by creating a 3D world that is playable within Facebook, which is normally home to simpler 2D games. The Wizard of Oz game is based on a license from Warner Bros. Interactive Entertainment, which owns the rights for the classic 75-year-old film.

“We believe Spooky Cool has achieved a step function improvement in social and mobile gaming with their 3D game engine that powers The Wizard of Oz. Joe and Larry are two of the best land-based casino and pinball game developers in the world,” Sassa said. “We plan on pairing our intellectual property and access to third-party intellectual property with the game development expertise of Spooky Cool to build a big presence in this space.”

In the Wizard of Oz, you take a trip down the Yellow Brick Road along with Dorothy and Toto, as long as you build the road first. It’s a city-building game with 3D graphics and voice-over narration. It features music from the film, video clips, and animated likenesses for characters. You can spin the world to see it from a different 3D view or look at the world from the top down.

“This investment is an affirmation of the mission we’ve embarked on at Spooky Cool,” Kaminkow said. “We’re starting an amazing new adventure with The Wizard of Oz, and we’re proud to have an organization with the foresight of Hearst realize our potential and support it.”

Kaminkow and DeMar got their start working in the coin-operated arcade business. DeMar was the partner of Eugene Jarvis, the creator of the classic arcade game Robotron 2084, and Kaminkow began working DeMar at Williams, one of the original arcade game companies. Spooky Cool Labs has about 70 employees.

“We’re bullish on Facebook,” Kaminkow told GamesBeat in an interview last week. “We think it has broad reach and is a place where players can get enthralled with and engaged with a product. We’ve never had a chance to reach such a large audience with one of our visions for a game.”