Blizzard Entertainment has announced that a big update is coming to Hearthstone’s Battlegrounds mode today.

Battlegrounds went into open beta on November 12. It combines Hearthstone’s card game mechanics with elements of the emerging auto chess genre. It gives fans a new way to play Hearthstone in a competitive environment.

Syvlanas lets players remove a minion from the board to give adjacent ones +1/+1. Rafaam can add the first enemy minion you kill in a turn to your hand. Vancleef will give a minion +1/+1 for each minion you’ve sold that turn. An interesting thing about all of these new heroes is that they are flexible enough to work with all minion tribes.

Two heroes that Blizzard rotated out last month are also coming back: Millificent Manastorm (with a nerf) and Lich Baz’hial (with a buff). With these five heroes coming in, five others are leaving the pool:

A bunch of other heroes are getting balance changes, which includes nerfs to some of the strongest ones in the game mode like A.F. Kay, The Rat King, and Patchwork. Blizzard is also nerfing Lightfang Enforcer, one of the strongest cards in Battlegrounds. It would give +2/+2 to a random Mech, Murloc, Beast, and Demon at the end of your turn. Now it gives out +2/+1.

The update also adds two new cards, Floating Watcher (a Demon) and King Bagurgle (a Murloc). These cards should give each of their tribes a boost in power in the mode, putting them on more even footing with Mechs and Beasts in the late game. 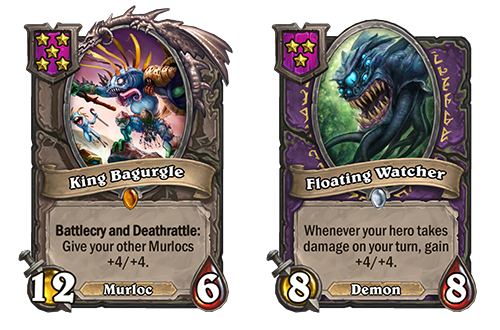 Above: New cards for Battlegrounds.

Among all of the balance changes, Nightmare Amalgam remains unscathed. While other cards either belong to one tribe or none, Amalgam belongs to them all. This means it can accept buffs from a much larger pool of other cards than other minions, so it works with just about any strategy in the game.