Hearthstone’s next expansion is Forged in the Barrens (literally, that’s its name). It ushers in a new Standard rotation — the Year of the Gryphon — and it takes place in the Barrens, an area known for battles between Alliance and Horde heroes, with roving bands of centaur and quillboar mercenaries.

Blizzard Entertainment made the announcement today at BlizzCon Online’s opening ceremonies. With 23.5 million active players, Hearthstone is one of Blizzard’s most important games. While it’s free-to-play, a significant number of players buy card bundles, packs, and battle passes, and these are significant contributors to Activision Blizzard’s bottom line. Blizzard didn’t announce a launch date when it revealed the expansion.

It also has a new key word, Frenzy, and ranked spells, which increase when you have 5 and 10 mana crystals. Frenzy has an effect when your minion survives damage — Blizzard showed the legendary Blademaster Samuro, who has Rush and deals his attack damage (in this case, 1) to all minions. Druid of the Plains transforms into a stronger Kodo with taunt when it gets hit. Sunscale Raptor adds a copy of itself when it survives damage. The Peon adds a random spell from your class to your hand when damaged.

“Throughout the Year of the Gryphon, we want to deliver fun new experiences,” Hearthstone boss Ben Lee said. He later said during the deep dive that they’re going back to the roots of Warcraft this year.

And that first new mode for Blizzard’s market-leading card game is Mercenaries. It’s a single-player mode about building teams of iconic heroes and villains from Warcraft and Hearthstone, like Ragnaros or King Krush. It’s a roguelike mode, and your heroes level up as they advance along their paths. It will launch later this year. Lee said it takes some inspiration from other tactical roguelikes. Your heroes have abilities, and you’re trying to build powerful combos and synergies. You move along a map (akin to Slay the Spire or Monster Train). You might have Ragnaros, Illidan, and Sylvannas on the same team.

Lee also said that these characters are outside your collection, like Battlegrounds. “We really think of Hearthstone as a platform card game,” he said. And you see that with Mercenaries and Battlegrounds. Mercenaries will tap into the reward track, just as Battlegrounds does. It will release late this year.

Battlegrounds got some attention during the Hearthstone deep dive. Senior game design Alec Dawson said that Mercenaries would come to the tavern (though he didn’t say which ones), as well as the first minion type ever made for Battlegrounds — Quillboar. Duels is getting more heroes as well. The Book of Heroes will tell more stories of Hearthstone’s class heroes, and the Book of Mercenaries will do the same for the Barrens’ 10 main mercs.

The expansion coincides with a new year for Hearthstone, meaning that three old sets (in this case, Rise of Shadows, Saviors of Uldum, and Descent of Dragons) will be moving out of Standard. Hearthstone will enter a new Standard year, and it’s one of the most important, as Blizzard debuts its new 235-card Core set (29 of these are new), which will replace the current Basic and Classic sets that form the heart of players’ collections. This is the first change to how players’ core collections work since Hearthstone launched in 2014. Core sets will be free.

Hearthstone is getting spells schools, too. These are seven classes, and some classes have access to multiple schools. Chain Lightning is a Nature and Ranked spell, meaning it belongs to the Nature school and ranks up later on. Fel is another school, and we saw it for a Warlock spell. Priests get Holy, and some minions do things when you cast spells of specific schools (a Priest minion added health to another when a Holy spell was cast). 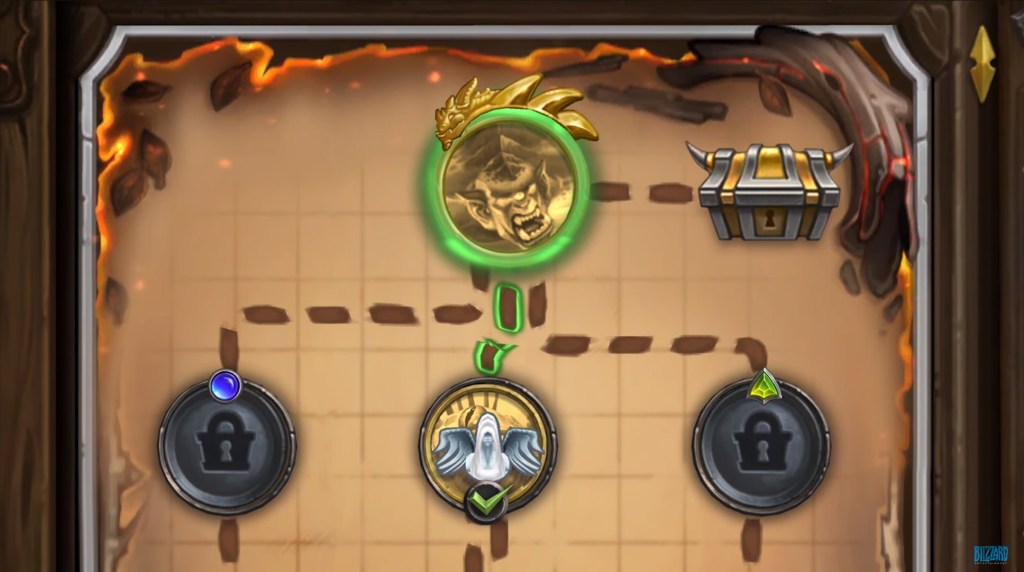 Above: Mercenaries is a new roguelike mode.

The Core set will refresh every year, making it akin to Magic: The Gathering’s (it uses monikers such as “Core Set 2020”). It rotates sets once a year. Unlike in Magic, in which two core sets will sometimes be in the same rotation, Hearthstone will just have one at a time in Standard. And unlike Magic, the core sets are free. And it will cut some older, less relevant cards — goodbye, Goldshire Footman and Frostwolf Grunt, which you can still play in either Wild or in Hearthstone Classic (which brings back cards to their original forms, without buffs or nerfs).

Fireball and Tirion Fordring will be among those remaining in the core set. Fireball is a Mage staple, and while Tirion isn’t always in the meta, it still is a recognizable card. And some Wild cards, like Annoy-o-Tron, are coming back. Game designer Alec Dawson said that some of the cards coming back are “timeless pieces of Hearthstone.”

New cards include Vanessa VanCleef, who is taking Edwin VanCleef’s place in the Core set. Her combo adds a copy of the last card your opponent played to your hand.

The refresh will include new spins on legendary dragons: Ysera the Dreamer (adds one of each dream card to your hand), Malygos the Spellweaver (fills your hand with spells), and Deathwing the Destroyer (destroys all minions, and discards one card for each killed). The change for Malygos is quite welcome, as the dragon pretty much saw play in one-turn-kill decks.

Forged plays up the themes of the Barrens zone in World of Warcraft. It’ll have 10 Legendary Mercenary minions (a tie to the new mode), and their stories will play out through the Year of the Gryphon (think about the recurring story about the League of E.V.I.L. in Shadows/Uldum/Dragons).