The third wing of Blizzard’s Hearthstone: Heroes of Warcraft adventure, Blackrock Mountain, is now open. This guide will help you beat all of those nasty bosses inside Blackrock Spire. If you need help with the other wings, you’ll find links to our other guides below. 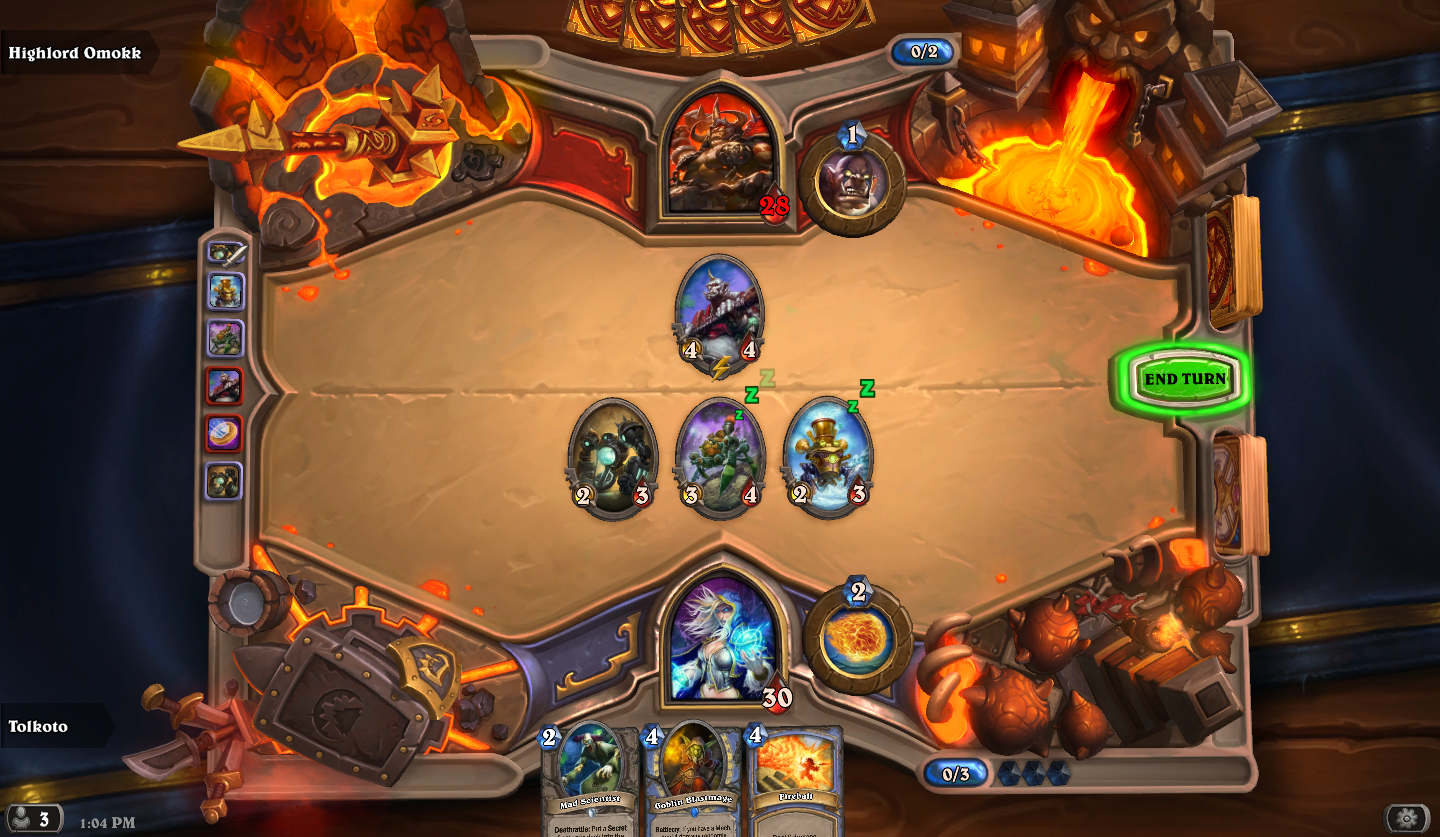 Above: Ogres are dumb.

For 1 mana, Omokk’s hero power will destroy one of your damaged minions at random. He’ll also play a lot of cards that give him armor, and he’ll use a lot of Ogre minions that will attack random minions.

Really, this isn’t that difficult a fight. Just use an aggressive deck that can deal damage to him quickly, and even all of that armor won’t help him. His hero power isn’t too bad when you have a bunch of minions on the board. You can afford to lose one of two during the fight, but most of them will probably die from his minions rather than survive damage anyway. Above: This is a fun fight.

Drakkisath’s hero power applies to both of you. This means that all of your cards will cost 1 mana, but you’re also capped at 1 mana every turn. So, you can only play one card a turn, but you can play any card. Well then, you may as well make a deck stacked with the strongest cards possible, no matter their mana cost.

He’ll start the fight with 50 health. Just play minions with high attack power, and also play some minions with a lot of health and Taunt — or even better, minions that have both and divine shield, like Sunwalker and Force Tank Max — so that Drakkisath’s own minions can’t destroy them or your hero. Put some powerful spells in your deck, too. Even the Mage’s Pyroblast, which does 10 damage and usually costs 10 mana, is now a 1 mana card.

Heroic difference: Drakkisath starts with 30 armor. He is capped a 2 mana while you’re still capped at 1. 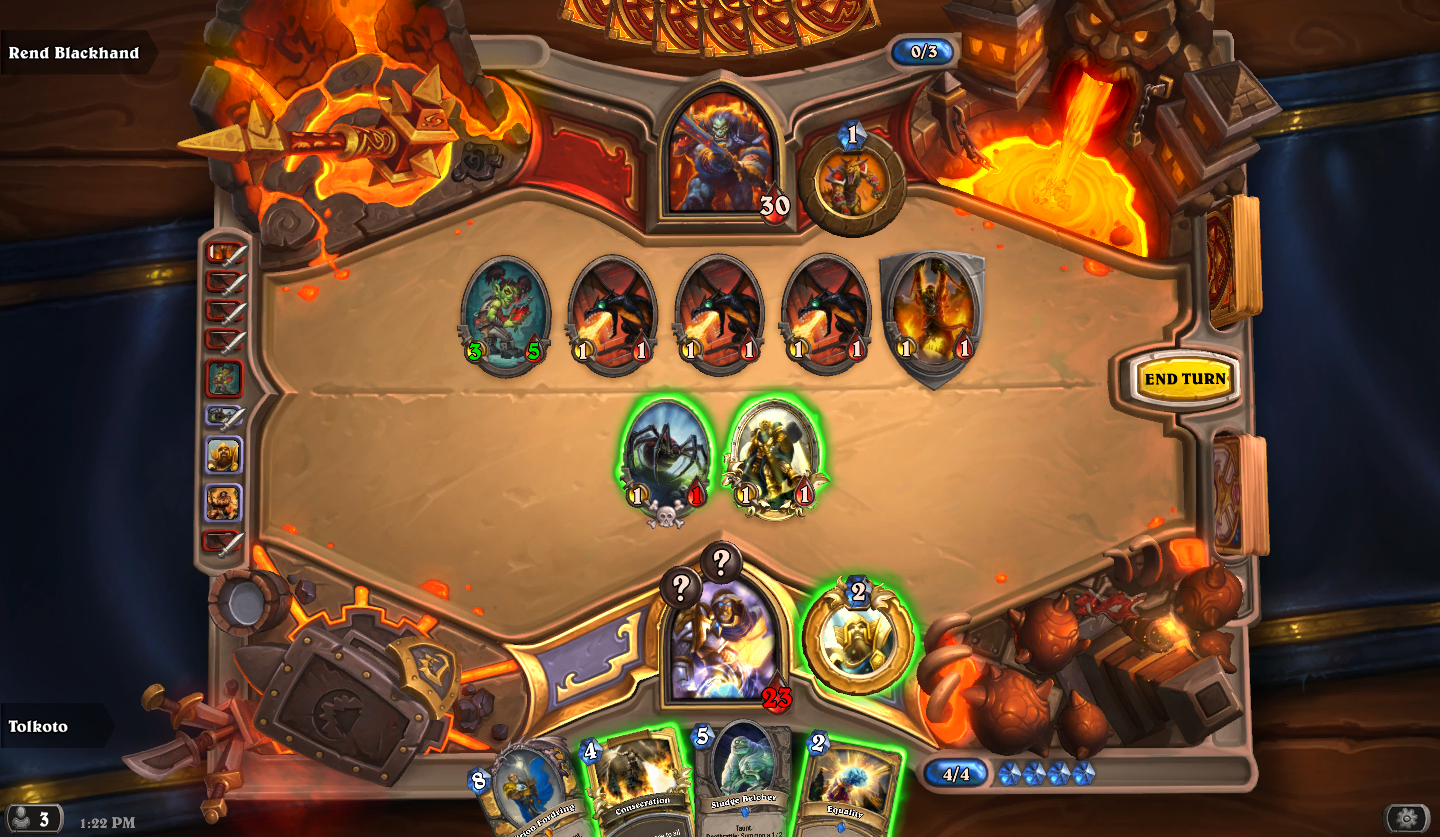 Above: Don’t get overwhelmed.

Rend is unique in that his Hero power changes when he uses it. The first time, it summons three 1/1 Whelps. Then it’ll summon 2 1/1 Orcs with Taunt, and then a 3/1 Dragonkin. After that, it’ll go back to the first Hero power. However, after the second time he uses the third one, it’ll turn into Dismount, which allows him to summon a 8/4 Gyth. He should be close to dead by that point, though, so don’t worry about the Gyth too much.

For the other minions, you’ll want an area-of-effect spell like the Paladin’s Consecration or Druid’s Swipe to take them out. They each have just 1 health, so they’re easy to get rid of.

Besides them, Rend will play a lot of Dragons and cards that work off of those winged wyrms. Use a control deck that’s designed to deal with powerful minions and help you maintain board control. Really, this isn’t too different from a normal Hearthstone match. You just have to use an area-of-effect spell to keep his Hero power minions from overwhelming you.