Hearthstone: Heroes of Warcraft continues to swell in popularity, surging to No. 3 on the list of most watched titles on Twitch. Fans are clearly interested in watching their favorite personalities throw down minions and spells — and they’ll be treated to the best of the best in that department this week, as the BlizzCon Opening Week gets underway with the opening rounds of the 2015 Hearthstone World Championship.

After last year’s championship saw some clean sweeps using the Last Hero Standing format, Blizzard went back to the drawing board. This year, competitive tournaments — including the world championship at BlizzCon — use the Conquest format. Each player brings three classes and must win with each of them in a best-of-5 series. This is a quick look at who made it this far, what they’re bringing, and what you can expect could happen.

Hearthstone’s qualification process for BlizzCon saw eight months of ranked play and third-party tournaments determine a regional ranking for seeding a regional qualifier. The top eight players after each of those regional qualifiers went on to a regional championship, and four representatives from each of the four regions (Americas, Europe, China, and Asia-Pacific) now have their eyes on the world championship trophy:

The brackets are here on the BlizzCon site.

With Kranich as the only repeating player — last year’s champion, Firebat, did not qualify — we’re sure to see a ton of new rivalries and a new champion. On the heels of the recent Warsong Commander nerf, the Hearthstone meta is in a position to reward creativity, so there’s no clear answer as to what the right deck is

The unstable stable of decklists

As the players have arrived in California for the initial matches beginning tomorrow, esports site GosuGamers got a hold of the list of which classes each player is using. The highlights: 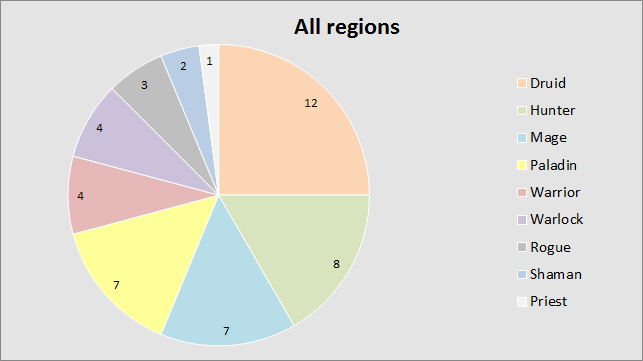 JAB and nias have the most meta-standard rosters (Druid, Hunter, Mage) according to the statistics, while Thijs (Mage, Warrior, Priest) and Ostkaka (Mage, Warrior, Rogue) have the most off-meta decklist. Some of the lists will be super predictable — Druid has one standard style — while others could vary wildly. Mage is most likely to be the Tempo style, but it could be Freeze or even Mech in this uncertain meta; Warlock should be Zoo, but it could easily be Handlock. The lone Priest and couple of Shaman decks are anyone’s guess, although Dragon or Control for the former and Midrange or Mech for the latter are the most likely.

Who’s win is it, anyway?

Group A looks good for EU champion Thijs; behind him, JAB has a strong selection of decks and looked strong in the Americas regional championship. Both of those players advancing would not be a surprise.

In Group B, things are harder to call. Kranich as the lone returning player from 2014’s championships feels like a safe bet, but his first-round opponent is the inimitable rope master, Lifecoach. They are arguably the two strongest players in this group, but one of either Zoro or Nias will get to make the winner’s match and potentially the decider match, which could put the loser between Kranich and Lifecoach through a tough grinder.

Group C has China’s champion, LoveCX, who many think is the favourite coming into this group. Ostkaka’s risky deck choices look questionable up against such a strong player, and Neilyo’s always a surprise. This group has a ton of Warrior play, so a lot of these matches could go long and come down to one or two key decisions.

Lastly, Group D is probably the toughest (it was a pretty even split between D and B for the ‘group of death’ vote over at PVP Live). Americas champion Purple looks incredibly confident, although he’s brought a surprising choice in Rogue. Both Shaman players also somehow landed in this group, with Pinpingho the only player who has reliably played Shaman up to this point. Neirea took a lone game off of Thijs after beating Ostkaka 3-1 in the Europe final, but his wins were largely over Ostkaka’s off-meta Priest deck in the semifinals. Seeing Purple come out atop this group with Pinpingho behind him could happen in the same fashion as the Kranich/Lifecoach pairing in Group B.

Assuming the champions and stronger secondary players advance out of their respective groups, this looks like a battle between Thijs surprise picks, JAB’s meta picks, Kranich as the sole repeat appearance, and Purple’s Rogue gamble. LoveCX has a strong background against the Chinese meta, but it may not be enough at the global finals.

Lifecoach has a good chance to make the semifinals if he brought Handlock, but this will suffer at the hands of faster deck rosters if so, since all of the most popular classes feature so much pressure and burn potential. Purple’s Rogue might help him skid past his Paladin-heavy group, but that list has the potential to be stonewalled by the Warrior picks.

If the Thijs is right, his Priest could be the answer to Mage — if no one brought Freeze Mage. If someone like Ostkaka or Neirea decided to haul out the classic freeze play, they just have to edge past Warrior to see tremendous success.

We’ll know who’s advancing to the BlizzCon playoffs in just a few short days, so stay tuned for all the action. Hearthstone’s second world championship begins with the initial sequence October 28 to October 31, and the playoffs run at BlizzCon itself November 6 and November 7. You can watch the entire Hearthstone World Championship for free over at www.blizzcon.com.