I have a Hearthstone: Heroes of Warcraft problem.

The online collectible card battler from Blizzard Entertainment has grabbed me in a manner no game has in some time. I play several matches — and frequently more — a day, trying to scale the rankings (and doing a rather crappy job of it), earn enough gold to enter the challenging and potentially profitable Arena mode, and unlock more cards. My Instapaper queue brims with articles about deck construction, Arena tips, and card values. I’ve even started watching matches on Twitch — and I’ve never watched the gaming-livestreaming service for anything in the past.

And the most telling sign of how much I play — and how good — Hearthstone is: I haven’t touched Civilization V, a game in which I have played 369 hours, since I got into the card game’s beta.

Here’s why Hearthstone hooked me and how I think it may hook you as well. 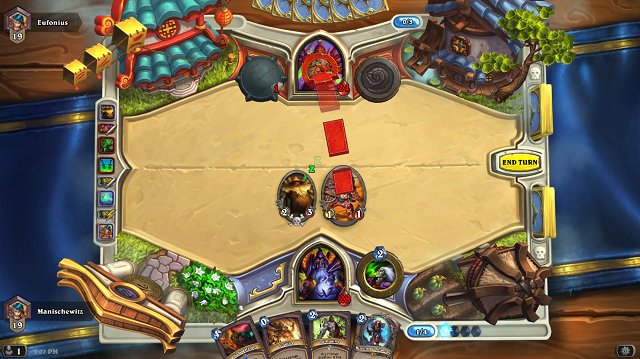 I hadn’t played a collectible card game in two decades, and I’d never played a digital one before. Yet it didn’t take long for me to feel comfortable.

The tutorials do an excellent job of teaching you the basic mechanics for constructed-deck play, where you build a deck from the cards you have and fight in battles (ranked or casual) to accomplish quests that give you gold and unlock cards.

Hearthstone is coming to iPad and tablets soon — but this trick helps you play it on a slate now.

Your character’s and your opponent’s faces are on each side of the board. Both start with 30 health, and you attack these “faces,” either with abilities, Minions, or spells, until you bring your foe to 0 health or you die. You play your cards on the board and use your mouse to make them attack either Minions (which are characters and monsters that can attach, defend, or use abilities) or cast spells. You can play defense as well with cards that have Taunt, which forces the other player to attack that card before all others (though they may use spells or abilities on other Minions or your character). And its tutorials give you rewards as well that you can use for buying card packs, entering the Arena, or crafting cards.

That sounds easy, but Hearthstone holds an amazing amount of strategy in how you use these cards and how you get around their powers.

… And a bastard to master 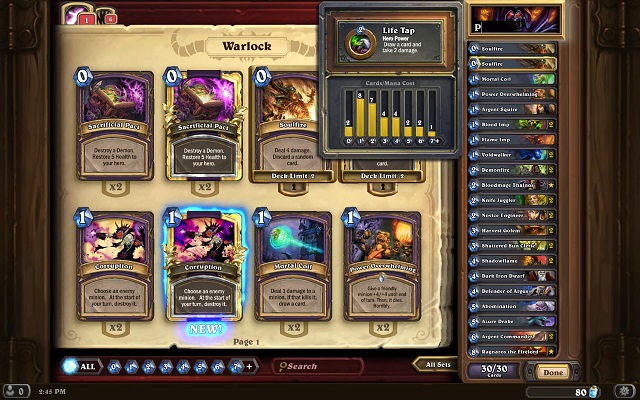 To build an effective deck, you need to balance the cost of your cards. This is the “mana curve,” and you want one that’s balanced and looks like an arc (where the low- and high-cost cards are low and the middle stands out like a hill). But this is more of a challenge than it appears. Some cards work so well with classes that you sometimes throw off that curve, favoring more lower-cost cards, as I do with my Warlock and Shaman, two classes that I have found benefit from having lots of smaller Minions (or the opposite, leaning toward higher cost spells and troops). Another popular Warlock deck features a host of sometimes expensive Giants, whose cost could be high or low depending on certain board conditions. And some players focus on using their high-value Legendaries, throwing off mana curves in the hopes of powerful troops that overwhelm opponents’ decks.

Each class also has a power that costs 2 mana per turn that you should also take into account with deck construction. Shamans summon totems that can provide low-value attacking and Taunt Minions, but it also calls in totems that boost health and spell power. The Paladin can call in 1/1 recruits every turn, and Priests can heal. The Warlock can draw an extra card — at a cost of 2 health as well as 2 mana. Well-built decks take advantage of all these hero powers.

Then come the synergies inside decks. Many Minions and spells work well together, and skilled players not only know how to layer these on top of each other but also have strategies to keep others from doing so. Each of the nine classes have these synergies (the easiest to pick up are Mage and Priest, with Warlock and Shaman being on the difficult side). The Paladin has a lot of buffing cards, so even if you don’t draw a good troop, you can summon and then buff a 1 attack, 1 health recruit (1/1 for short, and attack/health will appear like this throughout the rest of this review). Priests have cards that give you bonuses for healing.

And since Hearthstone has been in beta for months, you’ll find a flood of websites with tips and term definitions, deck construction guides and lists, card rankings, and even a site that ranks the card values for what you get in the Arena. 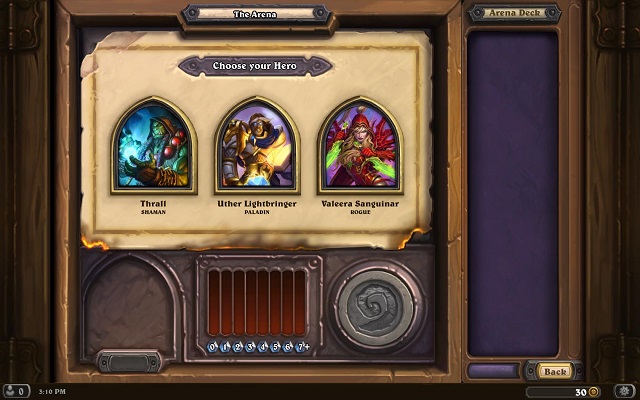 This is the best — and the most frustrating — part of Hearthstone. The Arena is a mode in which you build a 30-card deck from random draws (with three choices per set). You then take that deck into battles against random foes. The goal is to get as many wins as you can before you lose three bouts. The number of victories determine your rewards. Even if you go winless, you get a deck of cards and either a common card or a small amount of Dust (a magical element you use to craft cards you don’t have in your deck) or gold. But the more matches you win, the better the rewards — including chances to get Epic and Legendary cards. Win seven, and you get enough gold for another Arena run.

Deck-building strategy, through, is different in the Arena than in standard play. Minions are much more important because you’re not sure what synergies you’ll be able to take advantage of — two of my best runs were playing Hunter decks with just one or two Beasts, the backbone of that class’s deck. So you want to take the most powerful troops that you can — though this doesn’t necessarily mean those with the biggest mana. A 2-mana Bloodfen Raptor has 3 attack and 2 health with no special ability, but it’s frequently a better play than a 3-mana Minion with a special ability but lower health because that Raptor stands a better chance of surviving the round, especially if your foe only has one with 1 attack on the board. (This is called “the Vanilla” test.)

It takes time to grow used to this, and oddly enough, I’ve found that Arena matches have only become more difficult, not less, as the new players filtered in.

You don’t need to ‘pay to win’ 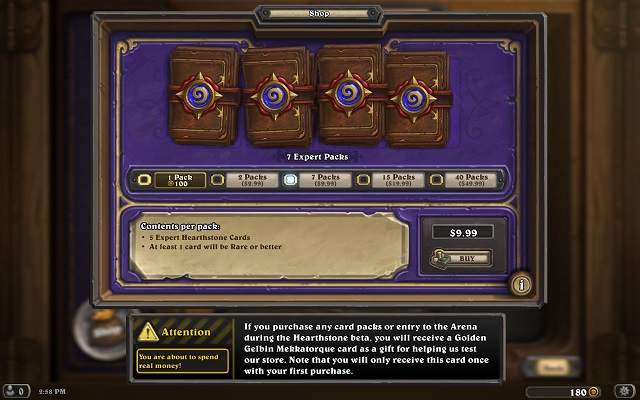 I didn’t pay for a single pack or Arena run until I decided I wanted to review Hearthstone, and then I only did just so I could test how these work. I bought 15 packs for $20 and five Arena runs for $2 a pop. I didn’t actually reel in that many rare cards that I hadn’t already earned. I did bag one rather useful Legendary, the Bloodmage Thalnos, who grants all your spells +1 damage and a card for your hand when he dies. He’s not an overpowering card but certainly more useful than many of the other Legendaries.

I actually destroyed a number of cards from those packs for Dust, using it to craft two Argent Commanders (a rare 6-mana card that has both Charge and Divine Shield). But I don’t consider the money I spent, which at $30 is half of a standard game, to be that much of a game-changer. Maybe I had poor luck with my packs? Maybe others pulling 15 packs nab more Rares and Legendaries than I did.

I even tested this with $40 worth of cards — 40 packs, with five in a pack. That’s 200 cards. And what did I get? I got two new Legendaries — Ysera, a powerful dragon, and King Mulka, an 3-mana card with 5/5 — two Giants, and 149 duplicate cards. And of those 47 “new cards,” 11 were Golden versions of commons I already had. A significant portion of the others were from classes I never use (hence, cards I hadn’t either unlocked or created yet). I did get 1,045 Dust from disenchanting the dupes, and that’s not even enough to craft a single Legendary.

While this is a one-test example, it shows that you just simply can’t “pay to win” unless you throw in gobs of money. I doubt Hearthstone would attract the same “whales” (that tiny slice of players who pay big bucks in free-to-play games) that you find in more casual games, where you know that money you spend on items isn’t tied to randomness. You need lots of practice and study to succeed at Hearthstone, not a fat wallet.