Heatwave Interactive has quietly built a studio to incubate video games and other media. It’s the brainchild of Antony Castoro, a seasoned game developer who started the company in February 2007. Heatwave just raised a round of $7.5 million from Syndicated Communications Venture Partners, VentureBeat has learned.

The Austin, Texas-based game company has a small crew of developers who incubate ideas for games. The company can iterate through a bunch of prototypes and ideas quickly, Castoro said, allowing it to take more risks and filter through more ideas than typical game companies.

“I formed Heatwave to deal with the risks of console and PC game development,” he said. “Large public companies are under pressure and they don’t experiment.” 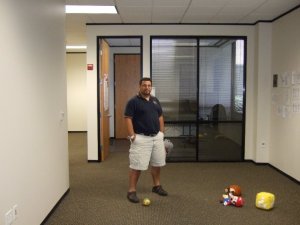 The company’s central studio develops its own original games or tackles games based on a license from a media company. The studio focuses on being the “executive producer” of games. That is, it focuses on pre-production, or the work involved in vetting an idea for a game and building its first prototype. Castoro said it was important to raise money from outside the game industry so that the company wouldn’t be beholdened to a particular game publisher.

Castoro taught pre-production techniques at Electronic Arts and operated the online game business at Codemasters in Europe. There, he said he got a look at more than 150 proposals for online games. Of those, he said he would have made only one. That kind of ruthless filtering is necessary in a video game business where costs for big games are in the tens of millions of dollars.

“There is not enough business discipline,” he said. “There is also a lot of game development talent that can’t get a relationship with a game publisher. We hope to stand out with our business model.”

On his web site, Castoro said he was working with an East Coast media company with three letters in its name. He declined to name it. Castoro said it may be 2010 before his company’s first game hits the market.

The closest competitor is the Radar Group, started last year by game veterans Jim Perkins and Scott Miller. That company works with independent game developers and movie makers so that a single work can be made into both a game and a movie at the same time. The idea here is similar. But Castoro said that his company will handle the pre-production and game production internally.

The company has 16 employees now but Castoro hopes to expand it to 35 people in the next 60 days. The company is working on three different products now.