SHANGHAI — Lots of Chinese game companies are flooding out of China into the West. Patrick Streppel, chief executive of consulting live operations firm IME helps make that happen. But he sees a ton of problems that can trip up the Chinese publishers that try to do it themselves and do it too fast.

The mobile gaming market has become tough, since it is dominated by long-term hits such as Supercell’s Clash of Clans, King’s Candy Crush Saga, and Machine Zone’s Game of War: Fire Age.

“Too many Chinese game developers spend money on marketing, not quality,” said Cai Cai, founder of Pine Capital, as she introduced Streppel for a talk at the ChinaJoy game trade show in Shanghai.

“I agree about the importance of the quality of games, the toughness of the market now, and the carefulness of investors and companies overall,” Streppel said. “I don’t think it is possible to just publish globally from one place, like Korea, China, or the U.S.”

“To go global, you have to be local because of the state of the competition,” said Streppel, former head of Gamigo.

Hamburg, Germany-based IME partners with game publishers in regions such as Western and Eastern Europe. Started two years ago, IME acts as a co-publisher, content agency, and consulting company for global free-to-play games. The company is a business-to-business operator, so it doesn’t put its own brand on games. 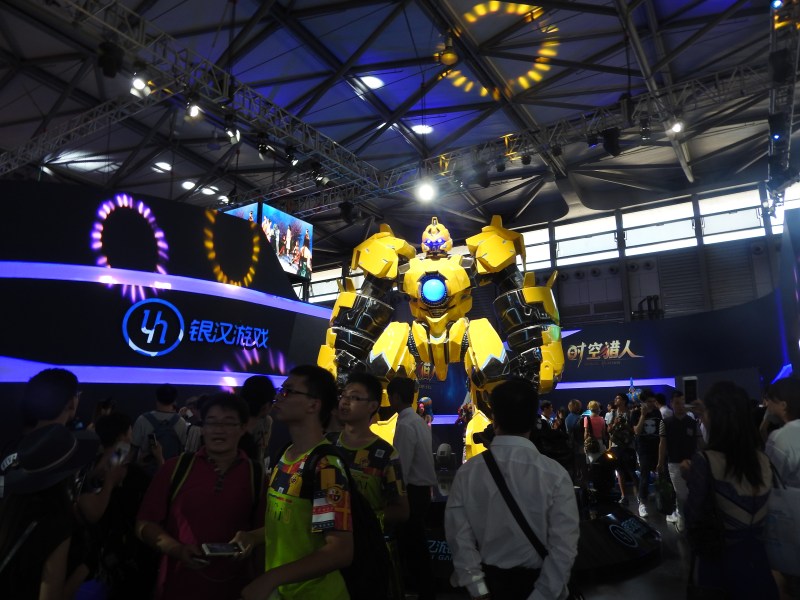 Above: This freaking big mech was in a prominent position at ChinaJoy.

The company helps secure licenses and figures out where those licenses will work. The licenses can attract users, but sometimes a game company winds up with just 20 percent of the profits in a licensing deal.

In Europe, he said, “The good old days are over where it was very easy to get money and make money. Wargaming, Riot Games, Innogames, and GoodGame are growing. But a lot of companies that hit 150 million euros in revenue are declining and restructuring.

“The companies with a lot of titles are falling behind, and those with just a few are leading,” he said.

Streppel said he encourages companies to self-publish their titles. But investing in a team and a local subsidiary in major regions takes a lot of time and money. The cost of advertising to get new users is rising. There’s very little visibility into how well that advertising works, and it costs a lot of money to build the systems to verify it and prevent fraud.

“Maybe you are advertising on the wrong platform or others are cheating on you,” he said. “It costs money to find out.” A lot of money is being pumped into ads. Chinese companies are investing a lot in user acquisition, and not in a smart way. It drives up the advertising costs for everybody.”

And some advertising channels don’t work anymore. TV ads are less effective because fewer people watch them. Most people multitask when they watch TV these days, so the ads have less impact, Streppel said.

“Your traffic is diverted because they write content to claim the traffic,” Streppel said. “Then they call the publisher to advertise on the web site. You buy your own users back for money.” 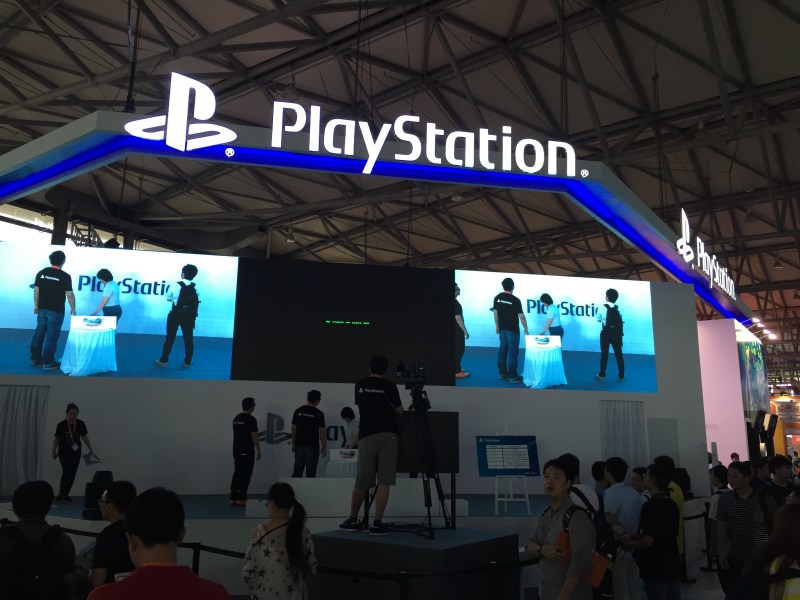 Above: Sony showed off a Chinese-made game at the front of its PlayStation booth at ChinaJoy 2015.

Smaller companies have to create games with good key performance indicators, or those that measure growth.

“Platforms want good KPIs if they are going to feature you, but how can you prove good KPIs without a lot of users,” Streppel said. “It’s a chicken and egg problem.”

Ad networks hold more power in Europe now, and Streppel said that ‘s a problem. There are a ton of cloned games that are heavily advertised, but  those clones destroy consumer confidence and make the market tougher. Lifetime value (LTV) calculations are key to figuring out if a game is profitable or not, and how much a publisher can spend on advertising. But LTV is declining for the games that are not in the top tier.

To win users back, publishers are discounting heavily. But users are being trained by promotions such as Steam sales to expect discounts.

The mature markets are seeing tons of new game launches still. Some companies are fleeing to less crowded territories.

Publishers can expand into markets such as India or South America, but it’s hard to generate revenue in those markets because users spend less and don’t have as much disposable income.

“A lot of companies are fleeing to mobile, but that makes the situation worse,” Streppel said. “So you have to focus on game quality.”

Streppel also said that publishers should focus on customization, a small dedicated team, and retention of existing users. And that’s what his team specializes in.