Heroes of the Storm isn’t planning on slowing down.

Blizzard’s multiplayer online battle arena (MOBA) just officially came out earlier this month, but the developer is already planning a new event that will add new maps and heroes. Heroes of the Storm is free-to-play, so adding new content like this important to keeping players engaged and happy.

We had the chance to talk with Heroes of the Storm technical director Alan Dabiri and senior artist Phil Gonzalez during last week’s Electronic Entertainment Expo in Los Angeles. We discussed the game’s future with The Eternal Conflict and beyond, as well as how current players are responding to the official release.

GamesBeat: When The Eternal Conflict launches, what’s the pricing model? Is it one price for the whole package, or are the maps free and you buy the heroes?

Dabiri: We’re wrapping this up into an event, but it’s not necessarily going to be sold as a package. It’s really just celebrating all these Diablo heroes. The maps will be free, just like all the other battlegrounds we’ve released. The heroes you can either purchase with gold, playing the game, or purchase with real money.

GamesBeat: You mentioned skin drops and hero drops earlier. What exactly is that?

Gonzales: We do have some crossover-themed skins. If you get a chance to see the trailer again, you’ll notice we have a Nova skin that looks like the Diablo II Amazon. We call it the Novazon. She has some cool effects updates. When she does a snipe she’ll throw a javelin. Things like that. We have an angelic Diablo skin, so all his aesthetic looks imperious, armored up. He has this angelic visage. All his abilities are re-themed to righteous light damage and stuff like that. We have some mounts that may show up in the future. We have some more crossover skins that may happen. Leoric has a pretty cool crossover skin that we’ll show in the coming weeks as we keep talking about the Battle of Eternity. 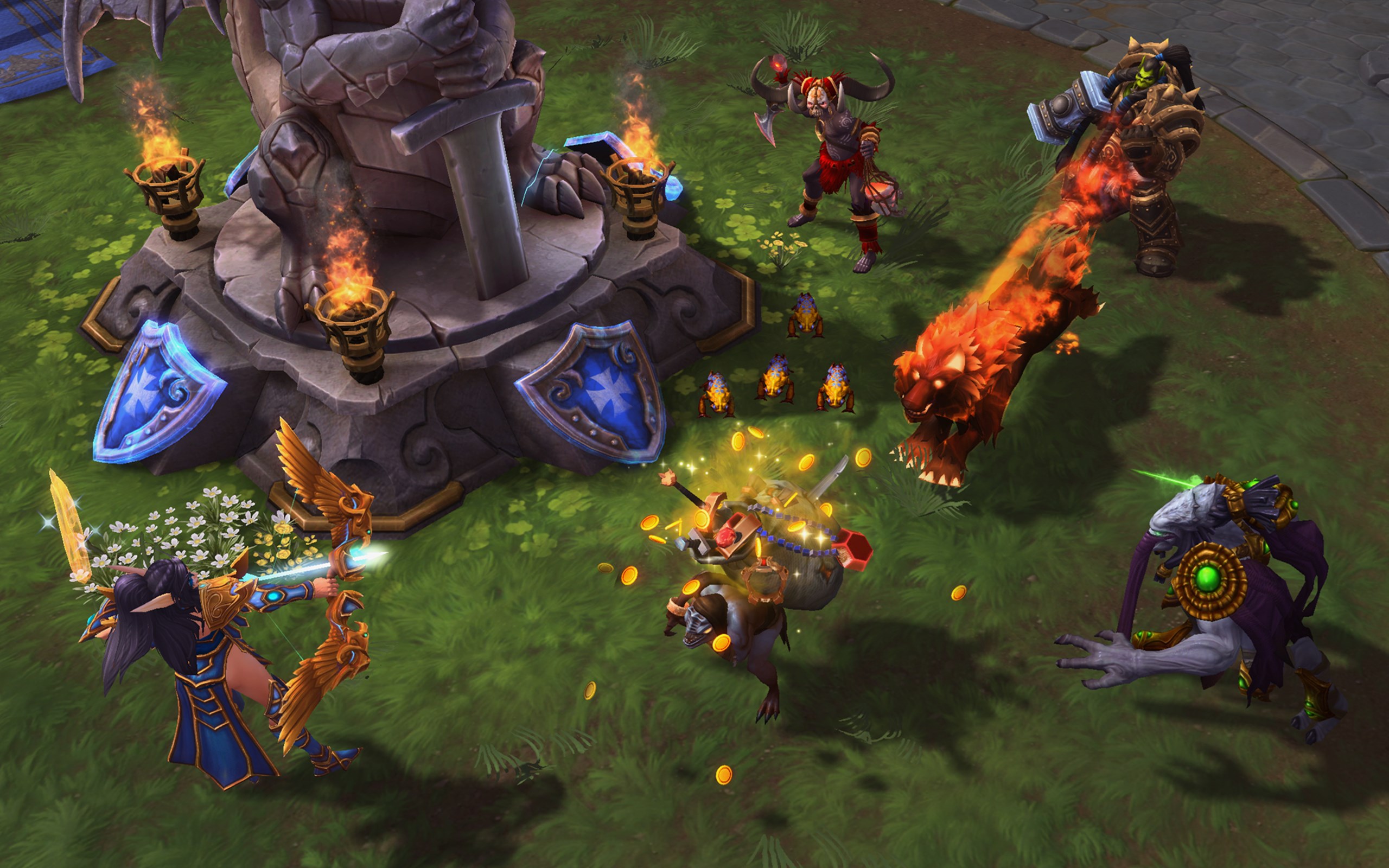 Above: The treasure goblin is spewing gold!

GamesBeat: When you launched Heroes of the Storm, the maps that were there weren’t specific to any one game. You held off on that.

Gonzales: One thing that was important to us — bringing all the heroes together was already a big undertaking, thematically. We said, okay, it would probably be best if they all show up in a new place, because players are showing up for the first time as well, seeing all these heroes come together. The environment is new for everyone. You recognize everyone who’s there, but we’re all investing in and discovering these new maps together. We had lots of feedback about, well, when are you going to bring worlds into the nexus? We wanted to establish that the nexus is its own world. There are game worlds we haven’t shown you yet. The nexus gives us that freedom. Otherwise, if we do a desert map, it’s like, why didn’t you do Uldum? Well, we want to be more robust than that. We want to have that scope at our disposal whenever we want. That’s what the Nexus is all about. We want a place where anything can happen.

GamesBeat: Since launch, what has the response from players been like?

Gonzales: Extremely positive. The community is growing very rapidly. We’re looking to continue to push out content in a three-week cadence and support our community and keep growing it. We have e-sports events. Heroes of the Dorm was a huge success for us. We have the Road to Blizzcon underway right now, already getting a lot of steam. Things are going very well.

GamesBeat: Looking at the character select right now, there are only so many slots. Does that really indicate how many characters there could possibly be?

Dabiri: That’s just UI [user interface] right now. I have no doubt that will change over time. We already have a bunch of extra slots there, and then eventually we’ll have to redesign the UI.

GamesBeat: It seems like you’re being very creative with new characters. You’re breaking MOBA conventions. Is that a deliberate choice, to differentiate yourself?

Gonzales: Somewhat? A lot of it stems from the talent system. We struggled for a long time with our item shop. When we were exploring just what kind of game we were making, well, a lot of these games have item shops. But when we did it, we thought, wait, Arthas has Frostmourne. Why would he need to buy a fire sword? That’s why we started exploring the talent system, to enhance what’s already there for the characters. That’s what people love. That’s what they’re cursed with. That’s what they’re attached to. The talent system gave us freedom to do things that are really outside the box. We could never do an Abathur if we didn’t have the talent system that we have, if we didn’t have the shared experience. Now that we have those freedoms, we have an ability to explore so much. That’s the thing that fascinates me the most about some of the new heroes coming on. Even things like Leoric’s Undying trait. This is wild. A lot of it has to do with the talents, the shared experience, what stuff like that enables in the mechanics. 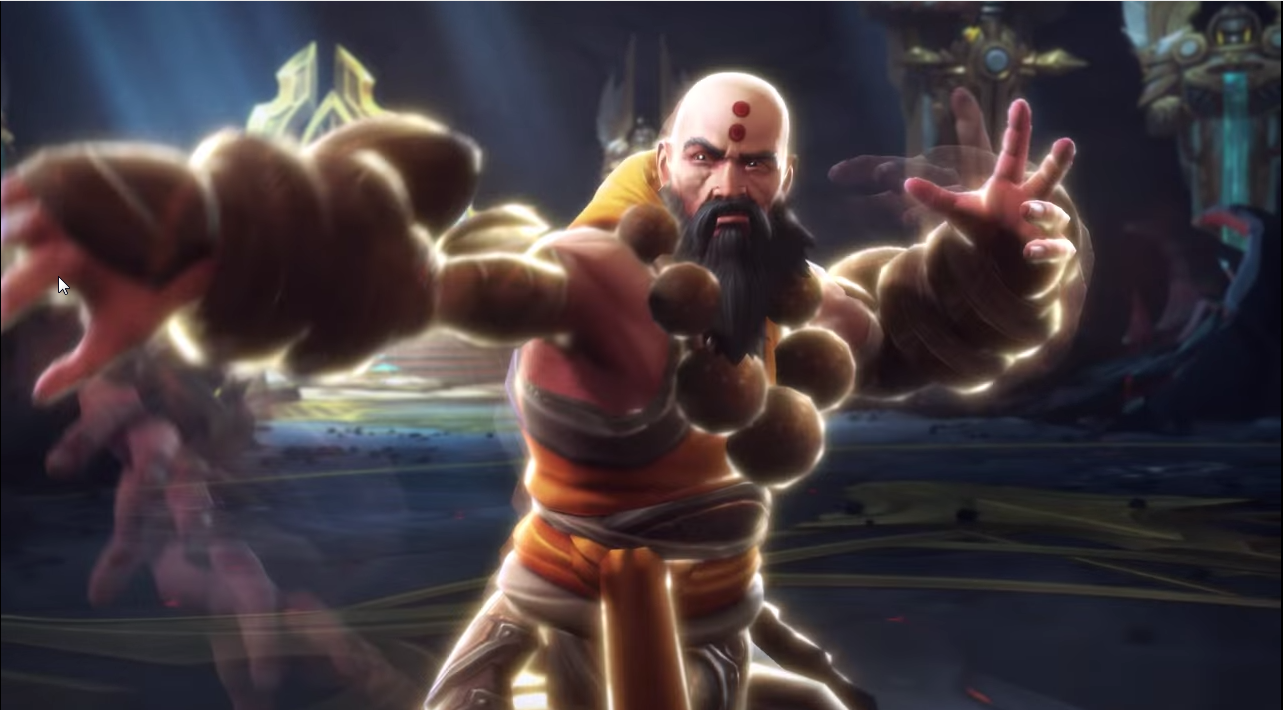 Above: The Monk can choose different traits at the start of a match to change as he plays.

GamesBeat: The game right now is very focused on team fights. They break out much earlier than they would in your competitors’ games because of the objective style. Do you think that hurts characters like a Gazlowe, who’s really better built for pushing and destroying fortresses?

Dabiri: You’re talking to the Gazlowe king over here.

Gonzales: I definitely feel, especially in the context of Gazlowe, understanding the maps is so key. It definitely requires a level of teamwork. If my team expects me to be in team fights all the time, I’m like, well, I’m Gazlowe. I need a lot of setup. If you just hope I’m going to drop four turrets right away, I can’t do it. But if you pick a spot and I get there in time, I’m going to create the worst choke point ever. Now we’re talking. It’s gonna be ugly. The more people get to understand the game, the way heroes work, the way maps work, those plays become really effective. When people know what I’m trying to do with Gazlowe, we just crush.

Dabiri: That’s one of the cool things about this game. Although you’re right, there is a lot of action right off the bat, team fighting, all that stuff, there’s a lot of depth there. Team fighting isn’t always the thing you might do for a Gazlowe situation, or one of the other specialists. As long as your team understands what you’re doing, you might be like, hey, guys, I’m not showing up, but I’m gonna push these lanes or get these merc camps. That’s going to fundamentally change the game. If they ignore me, they’re in for some trouble. You can decide to go after map objectives, try to do team fights, try to push the lane. There’s a lot of different options there. Depending on the situation, you might do one or the other. That’s what makes the game so interesting. It’s not just about, we gotta go team fight or we gotta go lane.