Part of me feels a little bad for Blizzard, since it’s only now releasing a game in a style it hand a hand in creating. But another part of me thinks Blizzard isn’t too broken up about it.

Like its direct competitors, League of Legends and Dota 2, Heroes of the Storm is multiplayer online battle arena (MOBA, a genre that’s sprung from the Defense of the Ancients mod from Warcraft 3), but it’s infused with Blizzard’s unique ability to distill complicated concepts into simple forms. Its objective is simple: Two teams have a huge building on their side of the map, and it’s your job to destroy your enemy’s. You do this by destroying the walls, towers, cannons, and structures around it. The enemy team’s characters (called heroes) don’t want that, and will try to stop you. The genre is usually too complicated for your average player to get into, but Blizzard has managed to create the simplest, least intimidating entry in the genre yet.

Dota 2 might be my favorite game of all time. I’ve played it for over 2,400 hours, more than the rest of my Steam library combined. But outside of a few friends with a passing interest I’ve managed to convert, I can’t recommend it to anyone without ample free time. It’s too intricate. What hero should a newbie play (it has quite a few)? What skills or items should I build (it depends on a number of things)? What goes through spell immunity (you can consult a list, but not in-game).

Heroes of the Storm is a lot like Dota 2 (and League of Legends), but it makes the nuances of MOBAs easier to understand.This may sound strange to someone who’s never played these kinds of games before, but it’s liberating to not have to think about what kind of damage each hero’s spell deals, which global skills and talent trees to equip before a match, what spells to put point points into first, or what items to buy. There’s no gold, only experience, which you get simply from being around enemy minions, defenses and heroes when they go down.

Each map has different objectives (more on that later), but they’re clear, and because they’re so important to winning, you won’t easily forget them. What sounds complex in text is a lot simpler in practice; pick one of the heroes available for free that week, enter a match, read the rules, and attack towers. After a few minutes and a couple of training matches, you’ll fall into the rhythms of the game, faster than in any other big MOBA. Heroes eases you in slowly but has less to teach you, and you could learn to play it between back-to-back World of Warcraft raids, if you’re that thoroughly entrenched in Blizzard’s ecosystem.

This simplicity is HotS’ biggest strength. It’s not dense. And while that may seem attractive to diehards of other games, it should appeal to just about anyone else who’s played a game with an isometric perspective. And as three-year Dota 2 vet, I found it a nice change. 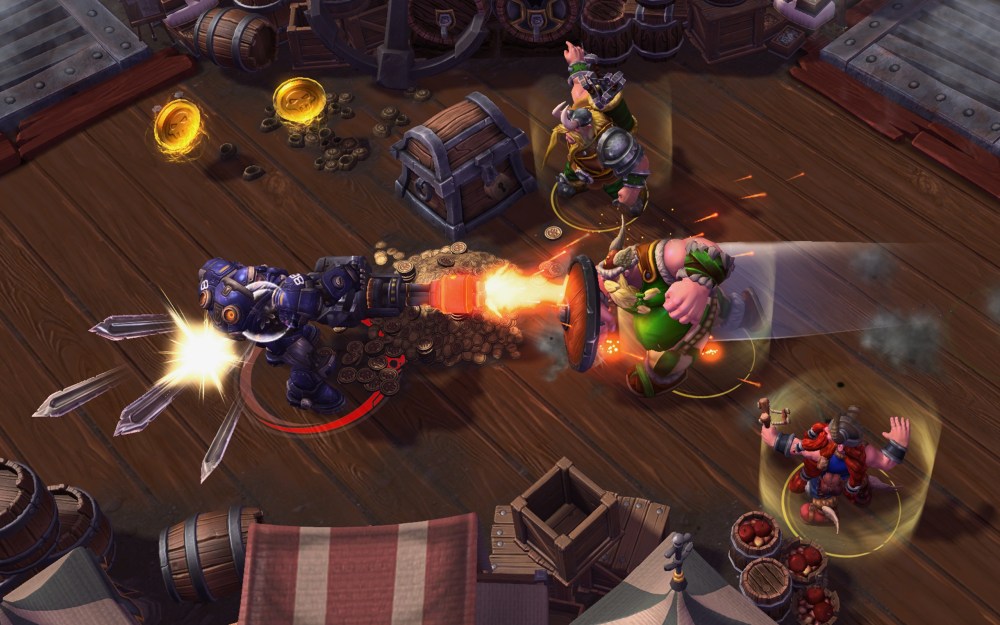 Above: Fights will usually take place near map objectives, such as treasure chests.

It emphasizes teamwork more than other MOBAs

Heroes of the Storm wants players to work as a team. This may sound obvious for a 5-on-5 squad-based game, but you’d be surprised. Other MOBAs thrive on highs and lows, with one of the lows being getting worked over by a single player who outclasses everyone else on the opposing side. You’ll find those players in just about any multiplayer game, but everything about Heroes points toward strength through synergy over individual glory.

Every member on your team shares the same level, so any kill on a minion, tower, or hero makes everyone stronger. The interface also shares both teams’ levels, making it easier to know when you should bide your time and play it safe and when to push after a favorable skirmish. “Kills” and “assists” don’t exist in Heroes, only “Takedowns,” which aggregate both. The scoreboard displays stats for damage done on heroes and towers, but it also shows damage healed as well as how much experience everyone’s contributed. These stats make it harder for a player on a losing team to find someone to blame for the loss. It encourages every player to think of themselves as part of a team instead of someone forced to play with one, which is a chronic problem in other MOBAs.

This causes people to think about the game differently, and the various map objectives drive the point home. Each of the game’s six maps has a team objective that takes places over the course of a match, whether it’s collecting gold for a pirate, entering the mines for skulls, or fighting for the right have someone on your team become a dragon. You can stay in your lane and gather experience for a little while, but if you don’t engage with objectives, nine times out of ten you’ll lose. Objectives often involving staying in particular areas of the map for extended period of time, and these areas inevitably spawn the most fights. Win these fights, and you’ll have a huge advantage going forward.

This emphasis on teamwork makes it easier for anyone starting out to learn how to play without feeling like someone’s breathing down their neck, watching their every move and waiting to point out each mistake. It may still happen, but everything Blizzard does to wean people off individual play means most players will focus less on numbers and more on winning the game.

(Hint: To find out which role or character is right for you, read our guide to picking your role in every popular MOBA).