Above: Heroes of the Storm offers lots of rewards to keep you playing.

It just wants you to have fun

Newbies will find a lot of love in Heroes of the Storm, and it’s because Blizzard wants players to have fun (and then buy stuff). Hardcore players will eventually find their way into the hero and team leagues, which offer more competitive ranked play, where picking heroes choices are more important. Generally, the barrier to entry is lower than in Dota 2 or League of Legends, the learning curve is flatter, and it has all the hooks of modern multiplayer games that appeal to people who just want to have a good time.

As you play matches and level up your overall and hero levels, you’ll unlock nonessential items to equip, as well as in-game gold to buy heroes with (this is a free-to-play game, after all). You can see what you’ll get for every milestone, which makes it easy to settle into the “one more game” mentality and play for night after night. It also helps that games are about half as long as the average MOBA, meaning you don’t have to commit to playing for an hour at a time.

You’ll also get new, daily “quests” once you reach level six (which won’t take long), which will encourage you to play a particular kind of hero or to just keep playing by awarding more in-game currency. Other games would hand these bonuses out only if you played against other people, but since Heroes just wants you to keep playing, you can play against computer opponents and still reap the rewards. Skill is always an important factor most MOBAs want to teach you so you’ll keep coming back, but if you just like the way the game plays and want the feel of sweet unlocks, that’s fine too.

It doesn’t take itself too seriously

Heroes of the Storm is the Marvel Vs. Capcom of MOBAs. It has little regard for why any of its events are happening, but it cares a lot about individual characters. Heroes who have some relationship in their respective games will quip with each other, and you’ll see hundreds of callbacks to Diablo, Starcraft, Warcraft in the skills, aspects, and unlockable skins of each character.

But as much as Heroes  respects the lore of Blizzard’s franchises, it will also abandon it for the sake of a good gag. Abathur in a onesie, sucking on a pacifier? Why not? Nova as a roller-derby girl? Sure. Coming from Dota 2, where all kinds of user-submitted sets are rejected because they don’t match the lore Valve trickles out every once in a while, it’s great to see a company have fun with it. The crossover aspect gives the whole experience a sort of goofy air, and if anyone can embed a serious game with goofiness, it’s Blizzard. 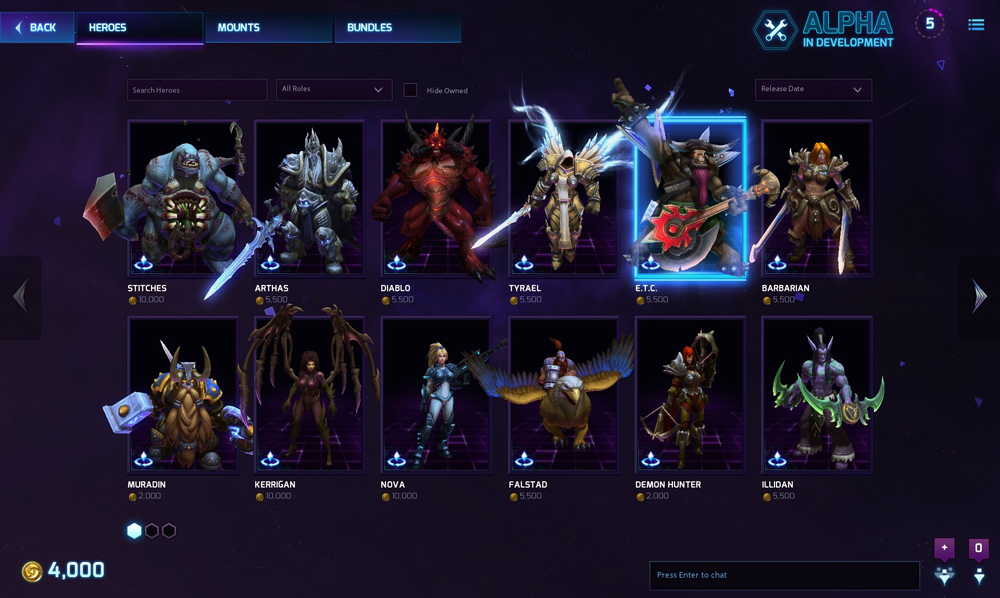 Above: Heroes of the Storm’s cast is small compared to other MOBAs, but it’s still farily large.

As fun as those outfits are, they’re expensive. They’re in line with what many free-to-play games expect you pay for similar items, and “whales” will be whales, but that doesn’t make them better. Twenty dollars for a rainbow unicorn is a rough deal, made even worse by the game requiring you to buy any hero you want play regularly or grind gold by playing matches to buy them later.

Weekly rotations are a great way to get players to try new heroes regularly, but so is having them all available from the start. Dota 2 does this, and it still rakes in big money from whales, though they do it by having a drop-based system wherein you can spend $20 and still not get the one rare item you wanted. It’s a pick-your-poison scenario, I suppose, but it doesn’t make any of these methods less sleazy. I have to imagine there’s a middle ground somewhere.

The exorbitant prices rub up against Heroes ’ “just have fun” mentality when you can no longer play as a hero you were having fun with, try to find the best way to buy them, then realize buying every hero will cost you about $300. Some heroes cost more than others (novice-friendly Raynor runs for a fiver, and he gets cheaper when you buy him in a bundle), but realizing how much they’ll have to spend (in terms of time or money) to get everything they want could turn prospective players away.