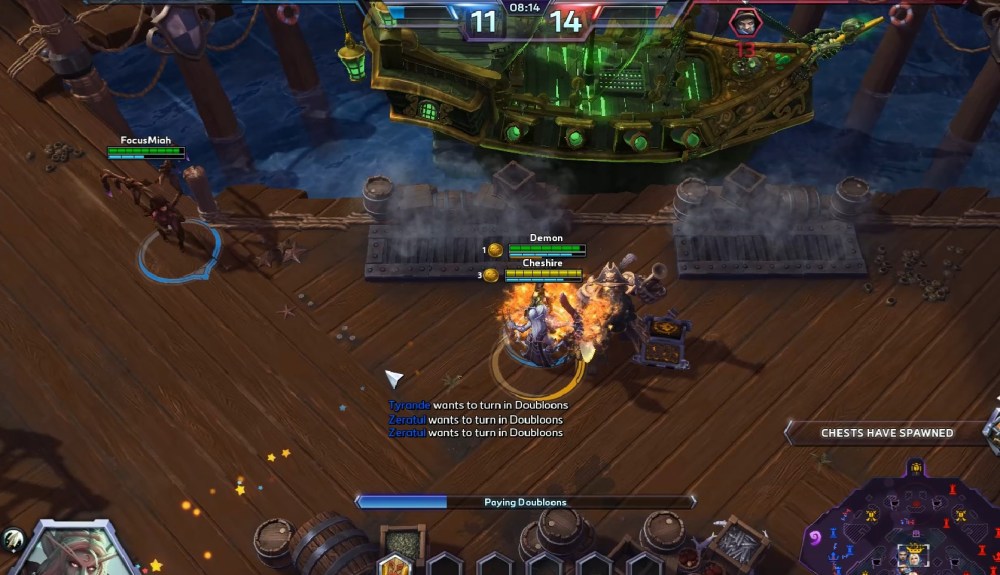 Above: Players hand over doubloons to an undead pirate in Heroes of the Storm’s Blackheart’s Bay map.

It’s a little behind on features

Heroes of the Storm’s approach to teamwork — that is, to make it more central than in any other game before it — is great, but it doesn’t fully commit. The biggest fault here is the lack of voice chat. I can see where Blizzard’s coming from (being berated by a teammate is worse when you can hear them, and most groups of friends will probably end up using a Mumble or Teamspeak server), but I don’t agree with its stance. Since you can mute players, you should only hear a bad comment once and be done with it. Typing instructions or suggestions is too slow for a game this fast.

I could understand the lack of voice if the ping system was more robust, but as it is, I found it lacking. You can ping four messages on a single point, and pinging objectives will tell allies you’d like to tackle them instead of trying to push down enemy defenses. However, you can’t ping a number of other things, such as your own health (to indicate you won’t be able to help in a fight because you’re low on health) or whether or important spells are on cooldown (meaning you want to wait until you can use them). Other MOBAs have only recently gotten these features, but they also had voice chat long before then.

You also can’t spectate other people’s games in the client, which is a problem for someone trying to learn the game by watching top players. Watching others play games you’re interested in learning is the best way to pick up new strategies, unlearn bad ones, and learn how certain builds beget different playstyles. Of all the features Heores is missing, this is the one I’d like to see added most, because it turn the game into more than something you play, which is the lifeblood of any game attempting to enter the wily world of esports.

Above: You buy heroes with real cash, or save up enough in-game gold to buy them.

Heroes of the Storm’s commitment to teamplay has a downside. With the way it handles leveling and the enormous importance of each map’s objectives, losing can often mean getting absolutely crushed. A small advantage in experience in the early game leads to a fight won, leads to an objective taken leads to another fight won, and so on. When you get rolled in Heroes, it can feel like fighting a tidal wave. And the collective experience means you know just how badly you’re losing. In all the matches I’ve played so far, I’ve never beaten or lost a lead greater than about three levels. Once a team gets a good start, it’s hard to stop it.

The most enjoyable matches in Heroes are often a thrill ride, where instead of a tidal wave you have a heavy sloshing back-and-forth in which the team who won the last fight has the biggest advantage. This is anathema to other MOBAs (since having only the last moments of a game matter can be frustrating after building up a lead), but with how fast the games in Heroes are, it’s the way to go, and Blizzard could probably do with adding a few elements to encourage big comebacks. It may not be the most proper idea of balance, but if Heroes  wants to maintain its fun-over-serious nature, it will have to start thinking more creatively than it already has.

I don’t think I’ll end up switching to Heroes of the Storm long-term. But what makes the game good is that I don’t have to. Rather than abandon it altogether, I can return to it whenever I’m stuck in rut with whatever other multiplayer game I’m fiending at the time, get a couple of fun, intense games in, then go about my day. That it doesn’t require as much investment is in many ways is in many ways antithetical to the genre, but for the many people who still haven’t found their place in gaming’s “big thing” right now, Heroes of the Storm could very well be what they’re looking for.

GamesBeat played the game during the alpha, beta, and release iterations, but the reviewer used their own money for microtransactions since they plan on playing the game occasionally going forward and feel using anything they didn’t pay for wouldn’t be fair to other players.