Hexagram, a maker of immersive experiences that go beyond ordinary video games, has named industry veteran Jamil Moledina as its CEO.

Los Angeles-based Hexagram develops alternate reality games, designed to be engaging experiences that get people excited about something. In 2019, Hexagram worked with production firm “M ss ng P eces”, Netflix, and Baskin Robbins on a promotion for the Netflix show Stranger Things. Dubbed Stranger Things: Operation Scoop Snoop, the experience debuted along with the launch of the third season of the TV show. The ARG, or campaign, or promo — whatever you want to call it — built on the Scoops Ahoy ice cream parlor that plays a role in the series.

Over two weeks, Baskin Robbins converted its stores in the U.S. and Canada to Scoops Ahoy stores. People waited in lines for more than eight hours to get into stores. They served ice cream such as the USS Butterscotch from the show. The Scoops Ahoy ice cream ship truck rolled out with actors from the show serving ice cream to fans. They then released a commercial with clues in it, and fans went to work deciphering it. To solve the puzzle, fans had to decipher the clues using technology from 1985, the time frame for the show, with tools such as Telnet, landlines, and fax machines. More than 500,000 people played, and Baskin Robbins saw an 11% sales lift across the whole chain as a result. Scoop Snoop won the 2020 Webby Award for Game of the Year, two AICP awards, and was nominated for a 2020 interactive Emmy.

Hexagram has been doing this kind of campaign, or interactive experience, or game for eight years. In an exclusive interview with GamesBeat, Moledina said he was drawn to Hexagram’s focus on the interactive storytelling in alternate reality games and the borders between movies, TV shows, and games. (Moledina will be moderating a session on “storyliving” at our metaverse/growth event on January 26-28).

“Interactive storytelling has been an area of intense fascination for me,” Moledina said. “Games capture the public’s imagination. But there is this extraordinary in-between ground between film and television, and interactivity. On the one hand, even in the pandemic, you have Netflix and Disney+ going strong. And you have Fortnite, Minecraft, and Roblox capturing imaginations. And yet there’s this middle ground that our industries have inhabited forever. Immersive experiences bring these worlds together.”

With experiences like Operation Scoop Snoop, you can participate in the real world with friends and dip into the virtual world with tasks such as puzzle solving. You don’t have to pick up a game controller or buy a $60 game. You can just start solving a puzzle in some way.

“If you break it down, an immersive experience is a game that lets you play in a game world via phone or a web interface, in real life, through video platforms,” Moledina said. “It lets you feel like you’re actually there. And so there’s this wonderful complete dissolution of barriers between you and the play experience.”

For Stranger Things, Hexagram created a Telnet server that you could access via the web, and you could engage with the content via chatbots.

“The cloud-based experience remembers where you are in the adventure, and every day there are new challenges for you to solve,” Moledina said. “So the adventure is uniquely your own. Then different players share on social media what they’ve learned, and they come together to share insights.” 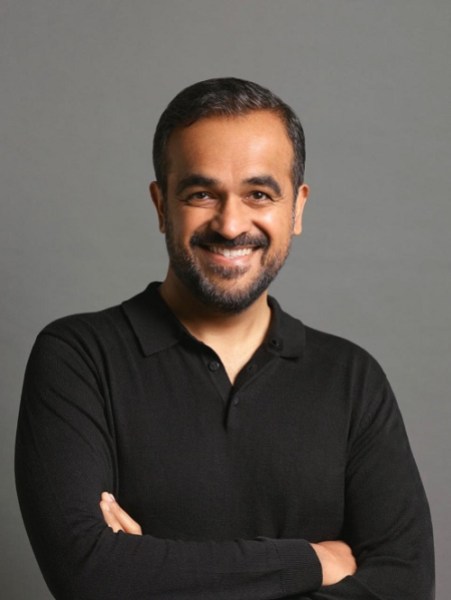 Above: Jamil Moledina, CEO of Hexagram.

Moledina brings more than two decades of experience to Hexagram, including leadership roles at Google, EA, and the Game Developers Conference. His background in bridging the worlds of interactive entertainment and technology is aligned with Hexagram’s mission to be the leading developer of immersive experiences that merge the virtual and physical worlds on phones, browsers, big screens, and real locations. I used to interview Moledina when he was the head of GDC, and he always had an eye for topics like science fiction and the intersection between industries. It’s good to see him grow into this CEO role, and he has been a good adviser to our GamesBeat events over the years.

As one of the pioneers of ARGs along with 42 Entertainment, Hexagram built a cloud-based platform for interactive storytelling and engagement called Saga. They used it to create immersive experiences for intellectual properties and brands ranging from X-Men to Skype and AMC. Experiences created with Saga can run across multiple platforms, including exchanging text messages with characters on the phone or the web, sensory immersion in virtual reality, or a physical location.

“VR is of course the poster child for immersion,” Moledina said. “Our thesis is that you don’t need VR to be immersed. It just happens to be very good at it natively. We think that immersion can be achieved through personalization and interactivity with consequence. Persistence, personalization, and interactivity can get you there without making someone put something on their head, which is a massive barrier to accessibility.”

Hexagram’s team of developers has worked together for nearly 10 years creating seamless experiences that redefine the way people interact with technology. Hexagram has created dozens of applications with millions of users, enabling immersion through the internet of things, chat, AI, location data, persistence, and personalization. In addition to working with entertainment companies, they also develop immersive experiences in adjacent industries such as education, health care, live events, smart cities, and cultural institutions.

Former CEO and cofounder Rob Auten will stay on as creative director, focusing on the mission of blending TV, film, technology, and games. Over the years, Auten has worked with Disney, Microsoft, and Meow Wolf.

Hexagram is working on a number of new projects, and Moledina hopes he can bring them to more people through more awareness. “Hexagram has been under the radar for a long time, and they’ve been perfectly happy just doing the work,” he said. “They were looking for someone to bring in the partnerships to surface our capability in front of the right people.”

The company has about a dozen people. They can spend as much as two years working on a project, or do something shorter in a matter of three months. Working with AMC on a short timetable, Hexagram tapped the ability for users to create their own videos.