It has taken a while, but Heyzap is making a real advertising business out of its mobile social network for gamers.

The company built a mobile social network where players would log in whenever they played a game and then see what their friends were playing too. This data was useful in targeting ads at the gamers, and it also helped with the discovery of new apps, which is the big problem in an age of stores with a couple of million apps.

About 18 months ago, Heyzap launched its advertising software development kit, which allowed developers to target ads at people who liked similar games. And that became Heyzap’s business. About 5,000 games are using the app SDK, and the company is expanding beyond games. And so far this year, Heyzap has been profitable, said Jude Gomila, cofounder of San Francisco-based Heyzap, in an interview with GamesBeat.

The company is on a revenue run rate of $13 million to $14 million a year now. And growth is expanding so fast that Gomila is targeting a run rate of $50 million or more.

“The app stores are not personalized for users,” Gomila said. “They are top ten lists for what everybody in the country wants. We do personalization of ads and get the right apps to the right users.”

Heyzap knows what you’re playing and what your friends are playing. It shows you static interstitial ads of other apps that you might like. If you have a good Internet connection, it will show you a video ad of an app.

“We think ads are fundamentally broken now,” Gomila said. “We try to make it much more personalized and figure out which users like which apps. It’s like a Netflix for apps, recommending games to you. Given our experience with users, we can do a better job.”

Heyzap has 20 people, and it is hoping to add five or six more to its staff. 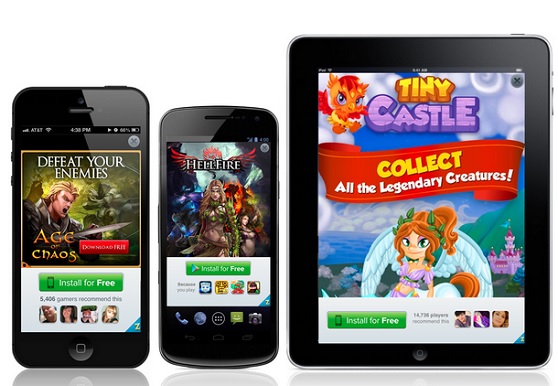 “We are hiring based on the revenues from the business,” Gomilla said.

It has taken a long time for Heyzap to get a stable business. Gomila founded the company with Immad Akhund in 2008 as a platform to support Flash games on the web. Heyzap shifted to mobile three years ago, and it turned off its Flash-based game platform at that time. The company has raised about $10 million from investors including Union Square Ventures and angels Naval Ravikant, Joshua Schachter, Chris Dixon, and Christina Brodbeck.

“I’ve been thinking about this market for six years now,” Gomilla said. “We kept our heads down and did lots of work.”

Lots of big companies are advertising through Heyzap. Those include Kabam, Gree, DeNA, King, Supercell, and Spotify. There are about 450 advertisers. The ads are getting billions of views.

Rivals include MoPub (Twitter), Chartboost, Burstly, Upsight, and Vungle. But Heyzap is growing fast. Last year’s revenues were about $4 million, and this year’s could be many times that number.

“We found what works, and that is good,” Gomila said. “We don’t have to raise money to grow the company. This is growing from within.”