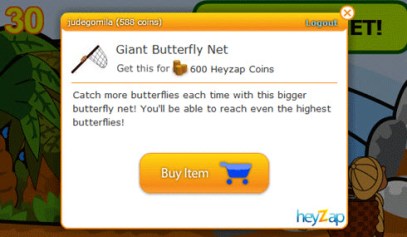 Flash games supported by advertising have been hit hard by the recession. But Heyzap hopes to help the masses of Flash game developers with a new virtual-good system that allows the games to be monetized through micro-transactions.

While such systems are becoming common at game portals and social games, they’re new to Flash games and represent a big opportunity for developers to find new ways of making money, says Jude Gomila, co-founder of the San Francisco company.

The system is easy to install. Developers can integrate it into an existing game. For instance, they can add a couple of big weapons into a game that users actually have to pay for through a tiny transaction. Players can pay in Heyzap coins, which can be paid for with real money through services such as PayPal or Zong.

The retrofitting capability is important because Heyzap is tracking around 12,000 Flash games now.  But it’s better if the developers create a game around the virtual goods system so it fits naturally into the game play.

Back in January, Heyzap launched a widget that allowed web sites to embed casual Flash games on their sites. To date, more than 22,000 web sites have done so. Those sites benefit because they get a cut of the ad revenue that comes in when players play the games on the site.  In that system, Heyzap also got a cut, as did ad provider MochiMedia.

But the ad economy has weakened. That has driven a lot of game companies to move from free games with ads to free games with virtual items that can be paid for with real money. The “free to play” virtual goods model was pioneered in Asia and has recently become popular in the U.S. with hits like Sony Online Entertainment’s Free Realms. On Facebook, lots of social games are thriving thanks to virtual goods models as well. It only makes sense, Gomila says, to extend the virtual goods system to casual Flash games.

Gomila expects to see competition from other companies such as its own partner, MochiMedia, as well as other virtual goods system providers. Casual Collective, a casual game company, has also created its own internally-produced virtual goods system for its casual Flash games. Gomila said that Heyzap’s system will support dual-currency models for games that have one currency that players pay for and another that they earn through game play.

In another new feature for Heyzap customers, developers can now add Facebook Connect and Twitter integration so that players of Flash games can easily invite their real-world friends to join. Heyzap has raised a small amount from Y-Combinator as well as a seed round of $500,000 to $1 million from investors such as Naval Ravikant of VentureHacks and Union Square Ventures.

Here’s a test game that shows how the system works: