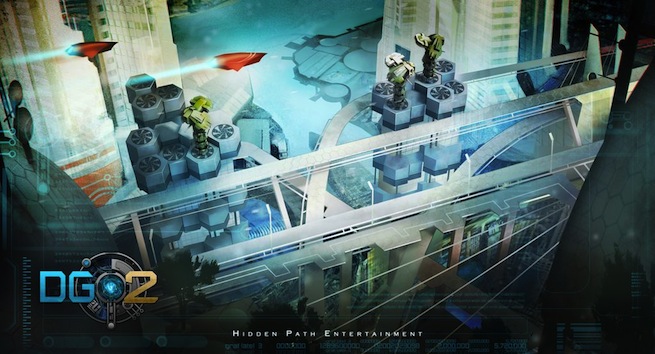 Chock it up to the rising costs of making video games. Despite the critical and commercial success of Hidden Path Entertainment’s Defense Grid: The Awakening, the developer has struggled to find publisher support for creating a sequel to its popular tower defense title. So it’s hoping that the game’s loyal following will help make Defense Grid 2 (DG2) a reality.

Though Hidden Path is busy working on Counter Strike: Global Offensive, they launched its Defense Grid 2 campaign this past Tuesday on Kickstarter, the online crowdfunding platform that’s been a proven success for some developers. Earlier this year, fans smashed Kickstarter records by funding Double Fine Production’s unnamed adventure title, and Brian Fargo’s Wasteland 2 secured funding within two days of its campaign going live.

And just this week, the tremendous enthusiasm for the Android-based open-source Ouya console helped it surpass its $950,000 funding goal in just a few short hours.

Via email, Hidden Path CEO Jeff Pobst breaks down the current climate for independent developers and how this led it to rely on Kickstarter for Defense Grid 2.

GamesBeat: What inspired the “instant reward” of the original Defense Grid? Giving out rewards before a project achieves funding is not something you see very often, if at all, in Kickstarter campaigns. Does Kickstarter have any rules in place for this kind of thing? If so, what did you have to do to get around it?

Jeff Pobst: We recognized that Kickstarter often doesn’t provide a feeling of instant return on your pledge, and we wanted to see if we could change that. We contacted the Kickstarter folks and told them what we wanted to do, and they said as long as we delivered everything through the Kickstarter messaging system, we’d be fine since they wouldn’t be providing information on the backers until after the KS closed.

Because we have an existing product out there that people love, we felt like if we could introduce backers, or their friends, to the existing game, this would also help get people interested in the development of more Defense Grid content. We think it’s a really exciting new approach.

GamesBeat: How did AMD and Razer become involved? Just to be clear, they’re not helping fund the game, correct? Rather, they’re helping the team optimize it through graphics chips and control interfaces?

Pobst: That’s right. They are not funding the game development. We started talking with each of them a while ago and came upon this idea of partnering on the project to help integrate their technologies into our products more strongly and to help provide more interest to the project for backers. AMD and Razer have been fans of Defense Grid, and as they each thought more about this, we all liked helping each other out.

Our products get additional technical help with integrating AMD’s and Razer’s products, and they help promote a strong product to the gamers that all three of our companies care about. They each donated the hardware rewards that are featured on the Kickstarter project, so all the additional money raised from those tiers goes fully toward funding game development.

GamesBeat: Are the Kickstarter milestones absolute? If the campaign fails to reach the $1 million needed to make DG2, does that mean we won’t see a sequel? Or do you have backup plans in place to make up the rest of the funding?

Pobst: We’ve purposely structured the Kickstarter so that there are specific deliverables with every funding milestone — from our initial goal of $250,000 to the ultimate goal of $1 million. We’ve already spent several hundred thousand dollars getting the Defense Grid 2 engine to its current state, and we will be further supplementing the development cost of the development from our own finances. If we just get halfway through, say, and reach $500,000 we’re going to deliver DG: Containment to backers, and we’re going to deliver the remastered game on the new engine to backers as we promise here — we’ll work straight on them and deliver them as soon as possible.

That alone will be a great Kickstarter story, and it will have gotten our development halfway to completing DG2. Then after that, we’ll continue on our own, slowly seeing what we can do and when we can do it. We can’t guarantee we’ll be able to make DG2 if won’t don’t raise all the money on Kickstarter, but we very much want to make the game, and it will be something we will be looking for ways to try to complete it someday. 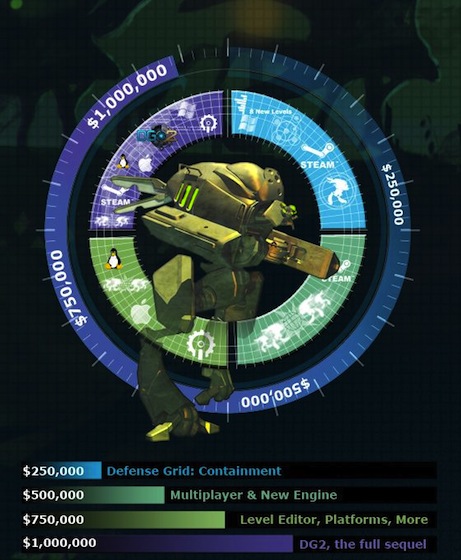 GamesBeat: It’s troubling to see that despite the success of the first Defense Grid, no publishers were willing to take a chance on funding the sequel. Do you see this as a massive hurdle for indie developers today? What do you think the industry needs to do to change this? Crowdfunding appears to be only a temporary solution to such problems.

Pobst: Games like Defense Grid cost a lot more than some indie games that are just made by two or three people on their own over the course of six or nine months. The original game had a development scope of around a dozen people for a year. But that said, it isn’t at all as expensive as some triple-A games.

I think publishers these days are looking for products that are either very inexpensive or are big bets for them where they’re going to spend much larger amounts of money. Defense Grid falls in between, and I think that more than anything is what made it a challenge to get picked up by the numerous publishers we’ve talked with. Everyone we talked to agreed that it was a high-quality product and was going to sell well. The question always was — would it sell well enough for them?

Because we’ve seen other companies — in gaming and other entertainment media with strong fan followings — have success with Kickstarter, we decided to explore this route. We have a very active and supportive fan base around Defense Grid, and the plan of letting them not only lend financial support, but also getting involved creatively, is very compelling to us. We want to have a closer relationship with our community. So we decided to bypass the publisher route and turn directly to our fans for their financial and creative input to bring Defense Grid 2 to life.

As for what the industry needs to do to change this, I think it is more about market forces and what each company is trying to accomplish. We as indie developers are interested in making great products that sell well and that people enjoy. We work to make enough that it will allow us then to make the next product and turn a modest profit.

Often, many publishers are trying to achieve more challenging goals, such as demonstrating year over year growth to keep their stock growing. They need to have larger returns on their investment to try to achieve the goals that they are setting for themselves, which puts their choices in low-cost product that might have a chance of returning high, or high-priced product that already has a known installed base, such as a sequel.

GamesBeat: How much of the Hidden Path team is focused on Counter Strike: Global Offensive right now, as opposed to those getting ready to work on the Defense Grid expansion and Defense Grid 2?

Pobst: Recently, we have only had a few people working in the Defense Grid franchise, putting out expansion content, doing updates, or working on the Kickstarter. As the majority of the team here at Hidden Path completes their work on CS:GO, we’ll be bringing on more people to work on Defense Grid, and the number of people we can bring onto the project will be directly based on how well the Kickstarter does. The fans will have a very direct impact on how much we can develop and how quickly we can do it. We’re really excited about involving the community in this way.

[Editor’s note: As of this writing, Hidden Path Entertainment has raised almost $80,000, with 32 days left to go.]