Startup HiDef said it has teamed up with Unity to create a metaverse games with social impact at its heart. On top of that, HiDef said the company has hired new executives to fill out its roster.

The San Diego, California-based company isn’t saying what it’s working on yet, beyond saying the company is working on games-as-a-service that transcend traditional gaming boundaries and demographics. The aim is to make games that connect and entertain people through creative expression, competition, shared experiences, and cultural discovery. The company raised $9 million recently.

It’s the brainchild of game industry veterans Anthony Castoro, Jace Hall, and Rick Fox and social impact expert David Washington. They started the firm in 2019, and the company has now hired four new executives to grow its team to eight.

“The deal with Unity happened not just because of who we are as individuals,” Castoro said in an interview with GamesBeat. “It happened because they know what we’re doing and they’re excited by it and they want to support it. And as you know, Unity has a really strong social impact angle. [Unity vice president of social impact] Jessica Lindl has been an awesome partner. And so that’s part of the reason we’re doing this partnership.” 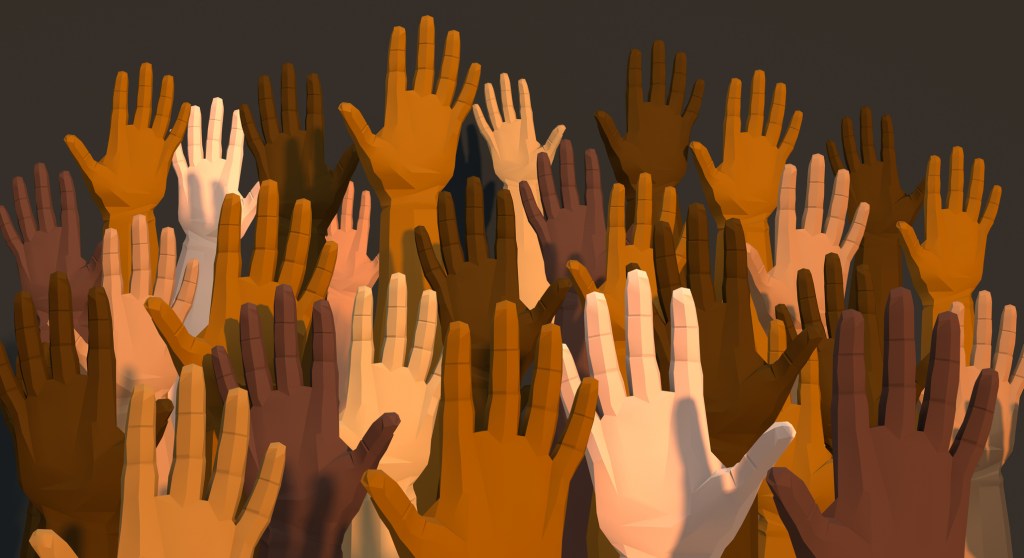 Above: HiDef is focusing on diversity.

HiDef will be developing its first title, what it says is a genre-defining metaverse mobile game, using Unity’s game engine. It will be featured in the Made with Unity co-marketing program as well as benefit from working alongside Unity’s Operate Solutions Gaming Services team.

This opportunity to work closely with Unity is a powerful boost to HiDef’s decision to self-publish, as the benefits offered by the massive engine maker’s reach and industry insights in the mobile market will be a key contributor to HiDef titles’ success, said Castoro.

“Unity has mobile and free-to-play expertise to help us develop the game and launch it successfully,” he said. “And their Made With Unity program gives us good exposure. And they’re obviously excited about what we’re building.”

Castoro said the collaboration is about more than just aligning technology; HiDef and Unity share a dedicated conviction around empowering creators all over the world, no matter their background. The stories that shape the world the most are often those told by underrepresented voices.

Lindl, and HiDef’s Washington will work closely together on multiple fronts to ensure that HiDef’s games have the power of both impact organizations. The first expression of this collaboration can be seen at the upcoming Unity for Humanity 2021 Summit, where Washington will be conducting a fireside chat.

“HiDef joining forces with Unity is a no-brainer,” said Washington in an email to GamesBeat. “As someone who already sits on the advisory board of Unity’s $200 million-plus Social Impact Fund, I know intimately how seriously they take my life’s calling: social impact.” 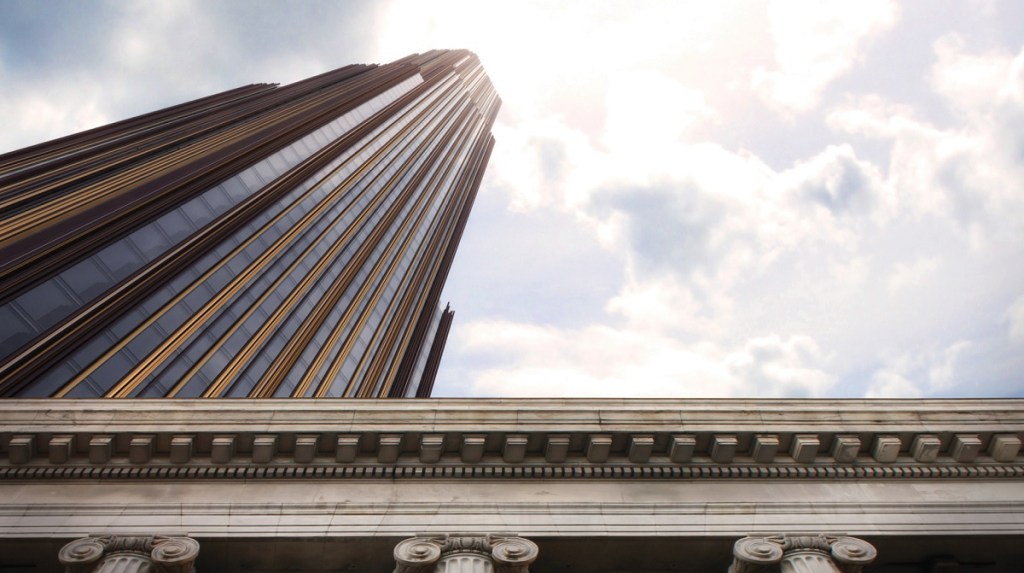 Above: Unity went public on the NYSE in September.

The companies believe they can achieve some transformative efforts not only within the gaming but also in popular culture as well.

“They know we see ourselves as not just a gaming company, but one that makes games that will work as a ‘culture delivery platform’ and I believe that resonated a ton with them,” Washington said. “Both organizations at our core believe the world is a better place with more creators, imagination, and inspiration in it. So we jumped at the chance to combine our super powers; our culture expertise and diversity with their breath of reach, their technology, their commitment to making gaming and tech available to everyone.”

Lindl said that inclusivity is central to the company’s social impact strategy.

“Our shared goals of giving rise to the underrepresented voices in our communities as well as providing economic opportunities to those individuals made this partnership a natural next step,” Lindl said. “HiDef’s multi-racial founding team personally understands that underrepresented creators don’t lack ideas, they lack opportunities. Building a pipeline of diverse talent and providing capital for underrepresented voices is Unity’s fundamental social impact strategy and an area we are partnering closely on with HiDef.” 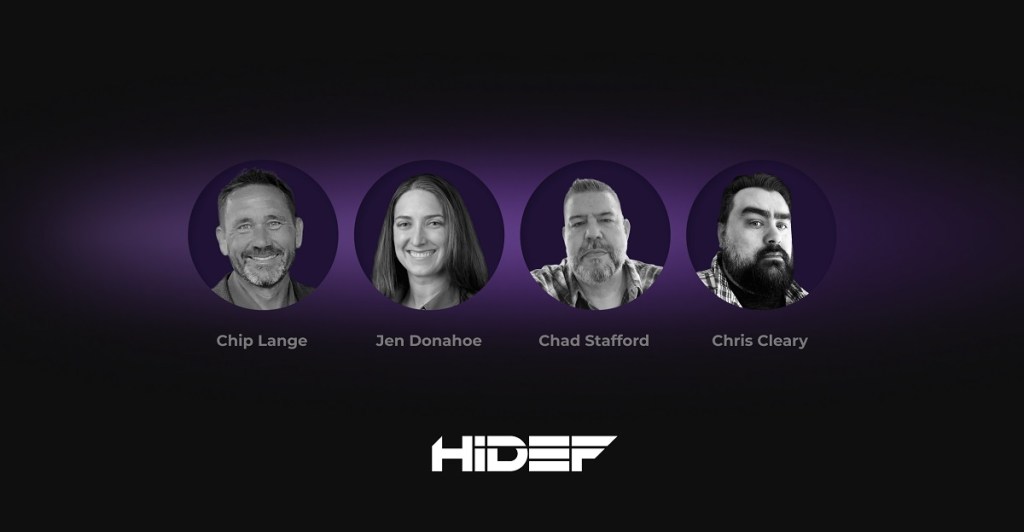 Above: New leaders at HiDef.

HiDef hired this wave of veterans for their mobile game experience. These include former Electronic Arts executive Chip Lange as president, Jen Donahoe as head of publishing and marketing, Chad Stafford as executive producer, and Chris Cleary as director of product management and analytics. These execs have backgrounds at companies such as EA, Zynga, Riot Games, Scopely, and Gearbox.

“All of them see what we’re doing and are excited by it and they’re willing to come over to a startup to be part of it,” Castoro said.

Castoro noted about 25 development partners are working on the project in addition to HiDef’s people. And the company is going to emphasize diversity as it adds more people.

“As we build this team, we’re making sure that we have new ideas, new voices, and try to represent as many points of view as possible in our products,” Castoro said. “It’s important in our hiring. It’s important in the product that we’re building. And we’re going to try to build a platform for our users to be able to express themselves that way too.”

HiDef is a multiplatform gaming company aimed at unlocking the creativity inherent in the gaming audience.

“Going forward, we’re going to help focus on the whole ecosystem problem of finding diverse content creators, getting their voices heard, getting them access to capital, and making sure the metaverse is as colorblind as possible,” Castoro said. “We’ve seen other technologies where if you don’t get all the right voices and all the right perspectives involved, the technology being built can have built-in biases.”

Through a unique gameplay technology platform, HiDef also aims to contribute and engage with the community around a mission of positively contributing to culture and society while opening up new powerful channels created by gamers, Castoro said. HiDef plans to launch its first mobile game in 2022.

As for diversity in the game industry, Castoro believes it’s behind in comparison to industries such as film and TV.

“Whether your entrepreneur and you’re looking for access to capital, or you’re in the corporate environment, a lot of these diversity things are tacked on,” he said. “Like, ‘Oh, we got a diversity officer. And we’re trying to hit a quota.’ But that’s why we started the way we did with a chief impact officer and trying to build diversity from the ground up. The game industry was very welcoming to different kinds of people in my experience. But it has also really suffered from this ‘bro culture.’ These things lived right next to each other. I thought we were headed there. But I also remember going to GDC and seeing an ocean of similar looking people. So yeah, I think we are behind now.”

And as for describing the game, Castoro said he will get around to that.

“We’re onto something that’s pretty unique,” he said. “When you see it, that’s pretty obvious. We’re trying to, you know, protect that idea. And we’ll announce it when the time is right.”

Disclosure: My daughter completed an internship at HiDef.