Oculus Connect felt less like a developer conference and more like a LAN party. You could still watch panel discussions and talk business over meals, but beyond that was something you normally don’t see at these events: laptops and PCs scattered across the hotel’s floors. That’s just the way some developers chose to show off their virtual reality games and applications.

Six months after Facebook acquired Oculus VR for $2 billion, the VR company hosted its first developer conference from Sept.19-20 at Loews Hollywood Hotel. Nearly 1,000 people came to sunny Los Angeles to learn about the latest advancements in VR technology. The space Oculus rented was barely big enough to house them all.

Palmer Luckey was clearly enthusiastic about the way it turned out. The young founder of Oculus VR — he celebrated his 22nd birthday during the conference’s welcome reception — is no stranger to experimenting with electronics. Long before he created his first VR headset, Palmer used to build tesla coils and lasers in his parent’s garage. The developers at the hotel embodied that same devil-may-care spirit. The lack of tables and demo rooms wasn’t going to stop them from sharing their work with other like-minded people. 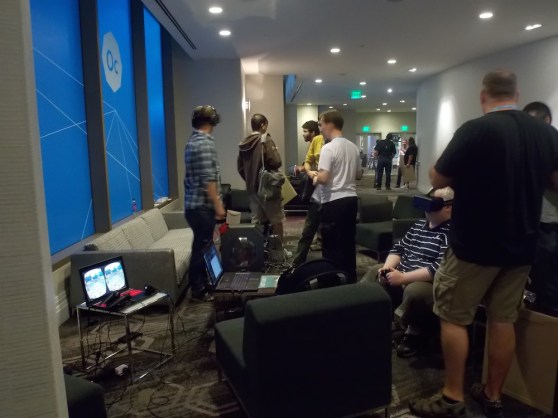 Above: Developers set up shop wherever they could.

The brave and the bold

“Safest” is the key word there. Though Oculus is doing well and aggressively hiring people now that it has more resources, it hasn’t put out a consumer version of its Oculus Rift headset. Its competitors — Samsung’s GearVR (made in conjunction with Oculus) and Sony’s Project Morpheus — aren’t on store shelves, either. That means developers are making content for something that doesn’t exist in the eyes of consumers.

That has to feel scary, right? I started asking that question to developers at this year’s Electronic Entertainment Expo tradeshow, and some of them responded with a mix of elation and nervousness. The devs at Oculus Connect answered in a similar way. It seems the excitement over VR and its potential impact on our daily lives is enough to erode their financial concerns … at least for now.

That is certainly the case with OlivierJT. Based in Paris, France, OlivierJT is an active member of the online VR community, and seeing his friends face-to-face is one of the reasons why he came to Oculus Connect. He was showing an unfinished product called Synthesis Universe, a music-driven game world he’s developing specifically for VR motion controls. Like the Rift headset, those don’t really exist. Since Oculus hasn’t revealed any controllers of its own, OlivierJT is a supporter of numerous crowdfunding campaigns for third-party input devices, including YEI Technology’s PrioVR suit and the Virtuix Omni treadmill. 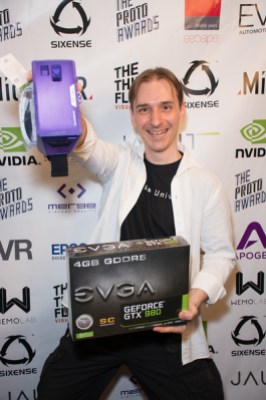 Above: OlivierJT poses with his prize.

He doesn’t know yet what he’ll do if they take too long to ship, or — worst case scenario — don’t come out at all. He needs those devices to complete his game.

“I’m one of the crazy people who [works full-time on VR games],” he said. “I started working on Synthesis Universe three years ago, and when the Kickstarter for Oculus was successful, I immediately switched to VR because I really want people to experience my universe. And VR is the only way to be somewhere [else]. … It’s a bit crazy. We’ll see.”

The short demo for Synthesis Universe served as an introduction to its futuristic atmosphere: Robot arms slowly placed pieces of my body together while music pulsated in the background (you can see a clip of it below). Even in its unplayable state, Synthesis Universe managed to win an award. On the first night of Oculus Connect, it nabbed Best Art Direction at the inaugural Proto Awards, an award show that recognizes achievements in modern VR.

Tony Davidson is another developer who went all-in. The early promises of virtual reality in the 1990s is what pushed him to become a game developer in the first place. Most notably, he was a CG development artist on Riven, the sequel to the seminal adventure game Myst. A few years later, he moved on to help create 3D worlds in films. He eventually landed a job at DreamWorks Animation, where he worked on How to Train Your Dragon, Madagascar: Escape 2 Africa, and Bee Movie.

In all that time, his love for VR never waned. When Oculus started gaining momentum, Davidson jumped into VR game development and founded Innervision Games in May 2013. That’s when he began work on Ethereon, an adventure game set in another galaxy. The demo he had on display featured an underwater segment where I walked through a long corridor while magnificent creatures swam around me. It was one of my favorite experiences from the show. 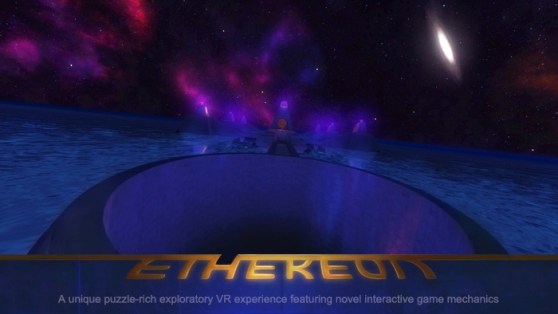 Above: If the Kickstarter is successful, Davidson said he’ll be shooting for an early summer 2015 release.

Davidson is fully aware of the challenges he faces with VR. After “exhausting” his budget, he recently moved to Oregon for the cheaper cost of living just so he can continue development on Ethereon. He hopes to gain additional support (and increase the size of his team) by launching a Kickstarter campaign in the near future.

“I can’t worry about [the Rift’s elusive release date]. It is what it is, so there’s no sense in worrying,” said Davidson. “It’s a huge risk, frankly. Back when I got into this in the early ‘90s, it looked so promising. There was so much hype about it. And I was sure it was gonna take off. And of course it didn’t. With this, I guess there’s some uncertainty, but I feel that it’s inevitable. This is a long time coming. Everything’s developed to the point where it’s totally possible.”