The game plays like Blizzard’s Hearthstone: Heroes of Warcraft, except with the innovative twist that you play it inside VR. That’s a good thing because it shows that a popular genre of game can carry over to virtual reality, which is expected to generate a $30 billion market by 2020, according to Digi-Capital. As companies enable new genres on VR, they stand a better chance of creating a whole new gaming ecosystem on the fledgling platform.

The card battler game is intended to deliver in VR an experience that is an enhanced form of digital card games like Yu-Gi-Oh: Trading Card Game, Magic: The Gathering, or Hearthstone: Heroes of Warcraft, the No. 1 digital card game in the world. Publishers Konami and Upper Deck have sold more than 25 billion Yu-Gi-Oh cards worldwide since 1999, which makes it the best-selling trading card game in history, according to Guinness World Records. On the digital side, card battlers are also growing in popularity. Hearthstone dominates a $1.2 billion category on PC, smartphones, and tablets that is growing each successive year. 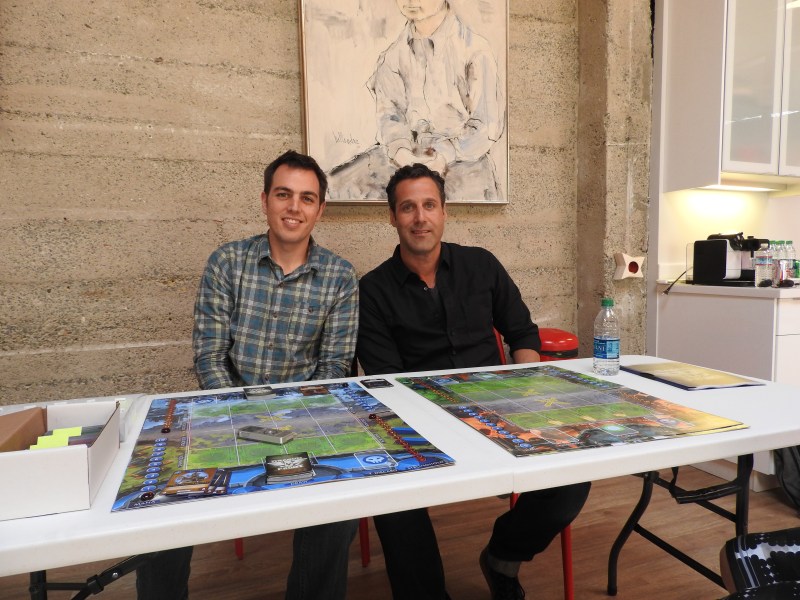 Above: Michael Doran and Jason Rubin of Oculus VR

The high potential of this category is why Oculus decided to publish the High Voltage game as a first-party title, said Jason Rubin, the head of worldwide studios at Facebook’s Oculus VR division, in an interview with GamesBeat. What’s unique about Dragon Front is that it is built for VR over the past 18 months. It’s expected to be available for beta testing in the second quarter, well after the Oculus Rift launches on March 28.

“We wanted to make something unique to the medium,” said Eric Nofsinger, the chief creative officer at High Voltage Software, in an interview with GamesBeat.

The team created the game as a paper card game first. They played it over and over before they started programming it.

Michael Doran, a senior producer for Oculus, said in an interview, “We found the balance before we went digital with it.”

I tried the game out using an Oculus VR headset running on a high-end PC. When you first put on the Rift, it looks familiar, as the setting looks a lot like Hearthstone, but two opposing fortresses instead of a tavern. The style is a blend of 1940s history, fantasy, and sci-fi — all mashed up.

The players have their fortresses, a champion, and dozens of different card characters to play against each other, all with the aim of destroying the enemy’s fortresses. This turn-based game has four lanes for combat. Each player gets dealt a stack of cards and plays them one by one, as long as they have points, or “mana,” to spend on the moves. You can send various characters down each lane, depending on how much mana you have. The characters that can do the most damage require the most mana, so you can’t deploy them until later. You have to decide how much mana to use early on, and how much to save for bigger moves such as unleashing your champion, who can do a ton of damage to the enemy. 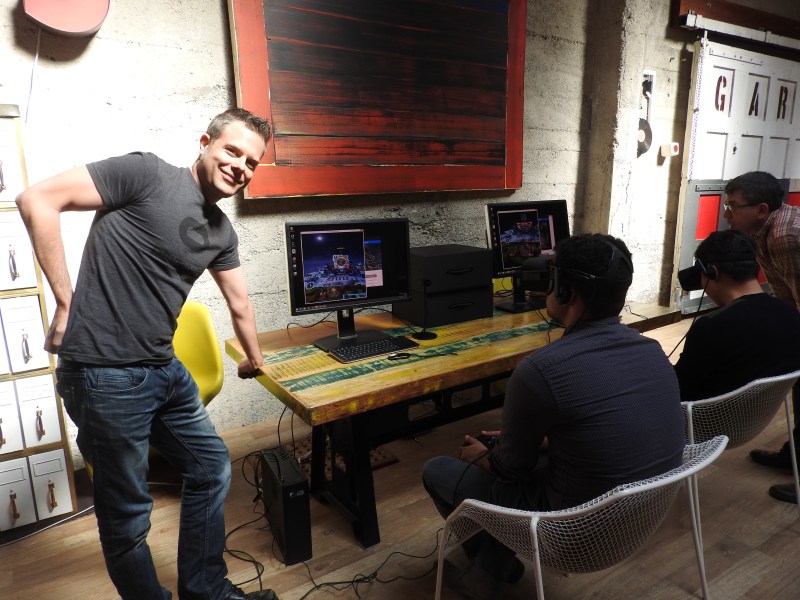 It has cards for both defense and for offense. You can set up walls, towers, or ranged units in the lanes. The tutorial had a fairly steep learning curve, but it comes pretty easily if you’ve played Hearthstone. The toughest part is simply learning what each card is capable of. Everything else was very intuitive. I used an Xbox One controller to select cards, but I could look around in any direction, such as the board or at my champion, to select a place to take an action. If you want to play a card, you look at it, you click a button on the controller to select it, then you look at where you want to place it. Then you click again to place it. All of that is easy to do.

All of this will seem very familiar to Hearthstone and Magic players. The game has 280 cards in the base set and 80 different encampments. But High Voltage Software has made them come to life in a unique way. The cards have visual and audio effects (which other card games have, too). You can change the value of each card through a collection of more than 100 spells. So the game has a lot of depth from the start, and High Voltage plans to release more content over time.

You can look at a character like a champion, a 3D-animated character, from any angle. You can examine it close up and see how it moves, as you examine each card in your virtual deck. Each one looks pretty good, but they are not as absolutely crisp as I would have liked. Some of the characters are blurry, though.

Turn by turn, I started playing with various characters, learning what I could do as I was dealt replacement cards. When I was done making my moves, my opponent went. It’s satisfying to see the battles play out in 3D, kind of like the Millennium Falcon‘s holoboard game in the original Star Wars.

One of the nice touches is you can see a mask where you’d expect your opponents face would be. Rubin said that he could always tell when his opponent was laughing because the mask would shake a little. I was able to unleash my champion down an unprotected lane early, and he dealt a lot of damage to the enemy’s base. I managed to win against the High Voltage guy, but I suspect he went easy on me.

Each Oculus player has to play on their own PC, which doesn’t lend itself to in-house gaming that well. But you can easily play with anyone else in the world.

“We can do matchmaking with ranking of players with anyone in the world,” Nofsinger said. “We wanted that kind of intimacy, where you play against each other, but you can be anywhere.”

Nofsinger said the game is initially releasing on the Oculus Rift as an exclusive, published by Oculus itself. But there’s nothing that prevents the company from adapting it to run on other platforms at some point in the future, if it is successful.

High Voltage Software has done 95 games in its 23-year history. It is based in Hoffman Estates, Illinois, and New Orleans. It has created games such as The Conduit, Saints Row IV: Re-Elected, Saints Row: Gat out of Hell, and Injustice Gods Among Us: Ultimate Edition. 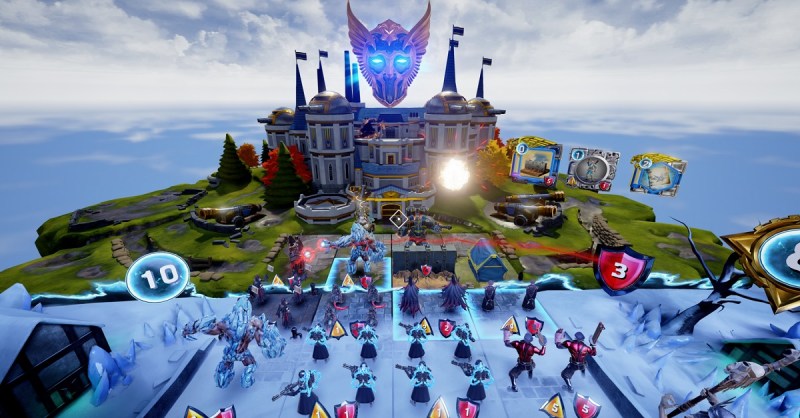 Above: Dragon Front from High Voltage Software and Oculus VR.