Hitman aims for the head with a second “premium” mobile game.

Square Enix Montreal works to bring the company’s top brands to the mobile space, and its latest is Hitman: Sniper, coming to tablets and smartphones on June 4. The company’s previous title, 2014 turn-based puzzle game Hitman: Go, has served as a showpiece for thoughtful adaptation of console games to mobile, and Apple named it one of the best iPad games of 2014. Just like Hitman: Go, Hitman: Sniper will go for a premium price of $5, steering clear of the current free-to-play norm in the $30 billion mobile gaming market.

It is available today on the App Store and Google Play.

The studio calls Sniper a creative, leaderboard-driven sandbox. It’s a living world seen through the scope of a sniper rifle, where players take on the role of Agent 47 and must find the cleverest way to take out a multitude of moving targets. They’re rewarded for being subtle, remaining unseen, and pulling off trick shots.

This all plays out on the screen of an iPad, where players can drag the camera around to view the world from afar, with zooming through the scope allowed for more careful shooting. It’s not necessarily hard to take out standing guards, but the moving and indoor targets will require more careful shots — there’s even a feature that lets you hold your breath for a steady shot. 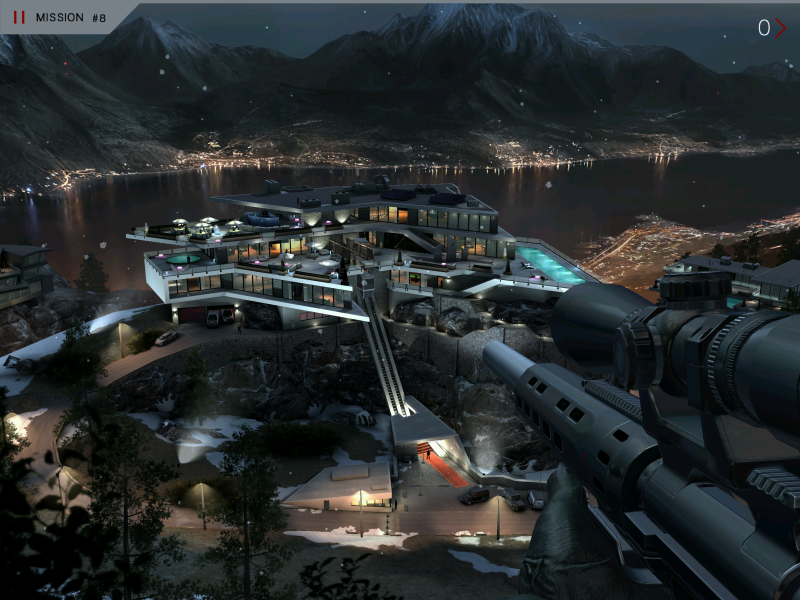 Just like with the console and PC Hitman action games, the real fun comes in the creative ways you can assassinate targets. See a guard standing by a pool? Take a shot at his head to have him fall over into the pool for bonus points. If you’re a sharp shooter, shoot one out of a balcony to have it fall onto another below, bringing a double bonus. The primary targets are usually harder to find, and require patience and pattern watching to pick out and kill. But with only 10 minutes on the timer and plenty of additional bonus targets to track down, Hitman: Sniper keeps you busy.

Hitman: Sniper’s missions don’t have just one way to play them, and this gives players plenty of creative freedom to find opportunities to climb up the game’s online leaderboards. All of the shots, tricks, hidden intel, and other opportunities go into a point tally that gets compared to everyone else’s. Square Enix Montreal is confident that the internal top score will be topped by a player in a day.

Studio head Patrick Naud noted that the company toyed with going free-to-play for Sniper, but he said that it saw more potential as a premium release the more the development team played it. This means that $5 gets you all of the levels, all 150 missions, and the 13 unlockable and upgradable guns, with no pay elements to deal with.