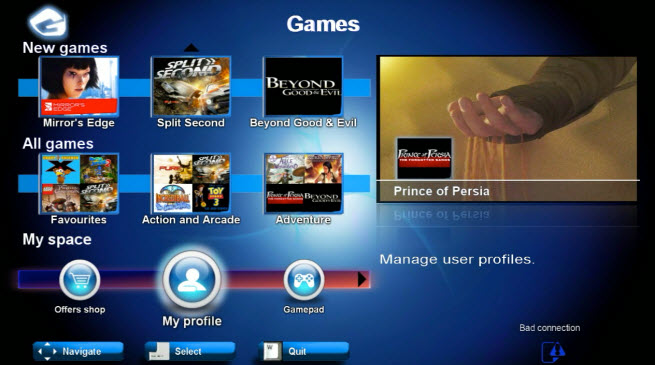 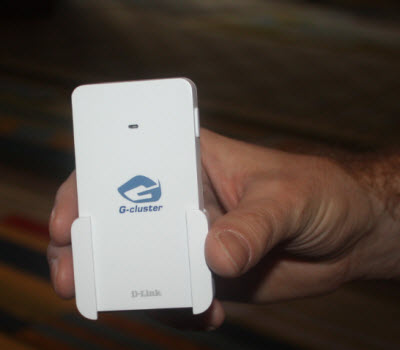 G-cluster has been around since 2000 as a cloud-gaming company. And now it is finally making its move in the U.S. market by launching its Game Machine platform, which plugs into a port on a TV and connects via Wi-Fi to a gaming service.

The company’s approach is part of the home-invasion trend in gaming. Game console makers Sony, Nintendo, and Microsoft have had the game business locked up in homes for years. But cloud gaming services like G-cluster and Android-based gaming systems from Green Throttle Games, PowerA, and Nvidia hope to change the competitive landscape this year.

The Tokyo-based company debuted its G-cluster Game Machine at the Consumer Electronics Show in Las Vegas. The aim is to get cable and telecom operators to adopt it and offer it as an enhancement to their entertainment services. As those operators do so, they don’t need to introduce their own heavy-duty game consoles.

Instead, they can simply provide gamers with the Game Machine, which plugs into a HDMI port on a TV. You can plug a game controller into the Game Machine via a universal serial bus (USB) port. Or you can use your smartphone as the controller.

“We are the pioneering company in cloud gaming,” said Erik Piehl (pictured below, left), president, managing director and chief technology officer of G-cluster, in an interview with Games Beat. “We were ahead of our time. Social networks didn’t exist back then. But cloud gaming has been taking off in the last few years.”

G-cluster got its big break in 2010 when SFR adopted its technology and launched a commercial cloud-gaming service on its Internet Protocol TV (IPTV) network in France. Now any of SFR’s eight million subscribers can play cloud games, where they process the content in the cloud, or web-connected data center, and then send a video stream to the gamer’s machine. G-cluster taps Nvidia’s GeForce Gaming Grid to help execute its cloud infrastructure.

“From our perspective we have the biggest cloud-gaming service in the world,” Piehl said. 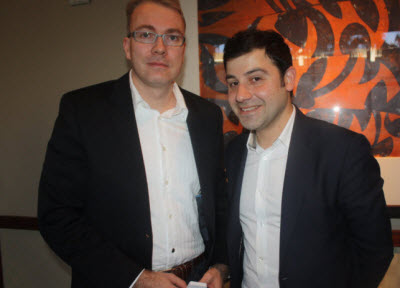 Players can use a game controller with a wireless receiver, smartphones, or tablets to control the game on a TV. They can play alone or with friends using PCs, smartphones, or tablets. The SFR players can access games via IPTV set-top boxes and PCs. In the near future, they will be able to access the service via smart TVs, mobile devices, tablets and the G-cluster Game Machine.

G-cluster’s pitch to operators is simple. If you make games available on your network, you’ll get high-margin revenues with minimal set-up, maintenance and operational costs, said Sevan Kessissian (pictured below, right), senior vice president of strategy at content at G-cluster, in an interview.

In contrast to rivals such as OnLive, G-cluster is going after family audiences that prefer either family-style AAA games or light, casual titles such as puzzle games.

“We are really going after the whole family,” said Piehl. “The service offers immediate access to the games. We deliver a TV channel just for games.”

A North American “tier-one operator” is running a trial of the G-cluster service, Kessissian said. Besides SFR, Orange and Broadmedia are also customers. If G-cluster can get these kinds of operators, it will be a test as to whether they have the stomach to challenge the core console business of Nintendo, Sony, and Microsoft.

“We have been operating a service in France for two years and we know that it is working,” Kessissian said. “Carriers understand that the cloud is a way for them to come back to the gaming business.”

An operator, for instance, can simply add a small monthly subscription fee to your existing bill to deliver a cloud gaming service to you. Intel and SFR have invested in G-cluster. The company is currently raising a new round.

The marquee game companies are stepping forward. Earlier this month, G-cluster announced that Warner Bros. Interactive Entertainment has released four games on the G-cluster service. The titles include LEGO Batman The Videogame, LEGO Batman 2: DC Super Heroes, LEGO Harry Potter: Years 1-4 and LEGO Harry Potter: Years 5-7. Disney and Ubisoft have also contributed games. About 15 games are ready to play on the Game Machine today, and G-cluster has a total of 105 games available on its set-top box service already.

G-cluster uses Windows-based games as its starting point. Developers can create their own cloud versions of the games by adapting their Windows games to G-cluster’s software development kit. G-cluster can distribute the game using a variety of methods, such as sales or rentals. The G-cluster device works on 4G mobile services.

“Our goal is to expand the size of the mass market for cloud gaming,” Kessissian said. “Potentially, it is a bigger business than PlayStation or Xbox.”

Here’s a video of the G-cluster service being advertised with Orange (in French).