I am not a games writer, nor am I particularly well adapted to review modern games; many of them make me motion sick — a feeling I’ve never encountered while playing Super Smash Bros 64 or Toejam and Earl on the retro consoles I keep in my apartment.

But when Sony orchestrated hands-on meetings with press in Manhattan to try Horizon: Zero Dawn, the next blockbuster PlayStation 4 release from Guerrilla Games, GamesBeat editor Jason Wilson assigned yours truly to the task. Hungry for a few hours’ escape from politics, I took him up on the offer.

Around noon Monday, I schlepped from my home office in Brooklyn to a Queens-bound G train. There I sat idly, watching heads bob as our train car bounced on its tracks, and occasionally skimming the notes I took from the Horizon: Zero Dawn trailers on YouTube.

I exited at Court Square in Queens, past a moving sidewalk clogged with people, onto an E train to Midtown, and walked four blocks to the facade of the Lotte New York Palace Hotel. One elevator later, I stepped into Sony’s suite, and stood there waiting for a moment, early, and ready to embarrass myself.

While I have played Blizzard Entertainment’s team shooter, Overwatch — briefly, at a friends’ over the holidays — and I’ve watched my nephew play dizzying survival games like Ark: Survival Evolved, I haven’t mastered a PlayStation controller since the days of Sony’s first console in the 1990s.

I looked forward to basking in the blue light of a PS4 Pro plugged into a massive 4K display, but on the standard definition screen of my MacBook Air, the trailer for Horizon: Zero Dawn seemed positively “good enough.“ Nothing special. In person, and in 4k, however, the game’s opening sequence is vivid and engulfing. Cinematic. This game is beautiful. 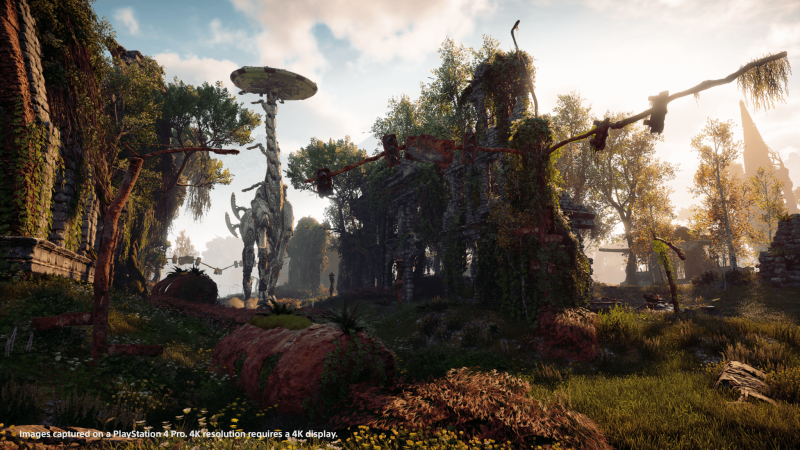 It sent me back more than a decade, to my days playing Final Fantasy VII and Final Fantasy IX — before my urge to play music supplanted my love of savoring the drawn-out cutscenes in Japanese role-playing games.

It begins 1,000 years into the future, long after a great disaster occurs, about 70 years from today.

You’re Aloy, a young “outcast” on a journey that, among other things, involves grappling with the machines that have taken over the planet. These machines look like wild animal robots, and humanity sees them as such because we humans outlived our knowledge of creating them.

“We decided to move on a lot further, past the apocalypse so there’s been a chance for nature to reclaim the land,” said Hulst. “And it’s lush and it’s beautiful, because we wanted to make a lush and beautiful place for the player to explore. And what happened is that humanity was thrown back — a lot of the knowledge of humans had been destroyed. Humanity survived; life always finds a way, but that doesn’t mean that after the apocalypse humans would always be the dominant species.”

In this world, technology is not understood; it’s magic. Mankind is doomed to live out a Terminator-esque future, complete with widescreen scenes of galloping machines that are like the animatronics in Jurassic Park.

One of the initial scenes takes the player inside a relic of Earth’s past (something that looks sort of like a flooded laboratory), where — New Yorkers will be delighted to see — some warm blooded mammals have survived, including what looks like our city’s beloved subway rat.

The landscapes are littered with rusted-over ruins, like moss-eaten street lamps and dilapidated buildings, but these remnants of the past blend in gracefully with the overgrown flora of the future. Many of the scenes conjure a feeling of tranquility — like the Earth is at peace without its human overlords — but playing Horizon: Zero Dawn is not a relaxing experience.

As I fumbled through a maze of ruins and practiced firing arrows at grazing robo-deer, I learned I’m not built for this type of combat. In Horizon: Zero Dawn, like Overwatch, your success depends on your ability to master the joysticks. It’s all about precision and speed. Hit the target or you’re done for. Quick!

But Hulst tells me Horizon: Zero Dawn was also built for other types of players (lucky for me). If vicious, charging hunks of steel send up your heart rate, you can always hide in the tall grass and set traps for your kill, instead.

The star is not the scenery

The premise itself is not miraculous; today’s as good a time as any for artists to imagine the techno-apocalypse. But Horizon Zero Dawn’s creators chose to extrapolate on it meticulously. The studio talked to anthropologists, studied the formation of tribal culture, and researched how certain building materials decay over time — say, 1,000 years.

All these details culminate to effectively strong props for what looks to be the most striking aspect of the game: its female lead, Aloy, who has dominated the discussion of Horizon: Zero Dawn since its unveiling at E3 in 2015. On GamesBeat and elsewhere, comparisons were quickly made to one of the few other blockbuster games led by a heroine — the Lara Croft series. So I asked Hulst about Guerrilla Games’ intentions. “We didn’t set out to make a game with a female lead. With this concept, she was part of it from day zero. The original pillars from the very first pitch had beautiful nature, ancient relics from the past, robotic wildlife … and Aloy was there, and she was there as a female.”

“It made a lot of sense for her to be this younger person — younger because she’s very curious. We wanted to have that juxtaposition between this agile character and these machines. It’s not so much that we’re trying to do something that others games have done, this has always been part of horizon. It was part of the first idea, and I never wanted to question whether that was okay or not because it was such an integral element of the original element of the high concept.”

I won’t spoil the game for you. And I can’t. In the hour I spent with Horizon: Zero Dawn, Aloy’s story buoyed an otherwise intricate, timely thought experiment, but I only observed a fraction of the game, and Hulst was tight-lipped about the story’s biggest secrets.

What’s Aloy’s origin? Why is she an outcast? Where do these machines come from? And what happens to us, 70 years from now, when the games’ apocalypse hits? In these times, it’s not a bad question to ask.

I thought about that as I walked out of the hotel, onto 51st street, and into the subway on my own journey home.