It turns out a girl with a bow and arrow can do alright for herself in a world filled with giant killer robots.

Horizon: Zero Dawn is PlayStation 4’s newest exclusive, coming out on February 8 (I played it on a PlayStation 4 Pro, the updated version of Sony’s console that displays games in 4K). It’s also one of Sony’s most important exclusives yet for the system since it launched in 2013. Horizon is the start of a new franchise. Its success could give the PlayStation brand another series to rely on for decades to come.

Well, maybe I’m looking to far ahead to the future. But Horizon: Zero Dawn is good enough to join Sony’s stable of top-tier franchises.

Horizon is a postapocalyptic game, but it’s nothing like the barren wastelands of Fallout. Horizon’s world is full of color and life. Humanity survived some sort of catastrophic event and had to start back at zero, forming tribes and living with limited technology.

Much of the joy in Horizon comes from exploring and learning about the setting. The world is full of mystery. What happened to the planet? Where did these robots come from? (More on those later.) And what makes the hero, Aloy (sort of a nomadic Lara Croft Tomb Raider-type character) special? The story has satisfying answers for all of these questions.

But even when you’re not unraveling the plot, the world is beautiful to look at it. You’ll find some ruins of the old Earth, but nature has retaken most of the planet. You’ll run and climb through forests, mesas, and mountains, all of them offering some of prettiest views you’ve ever seen a game. 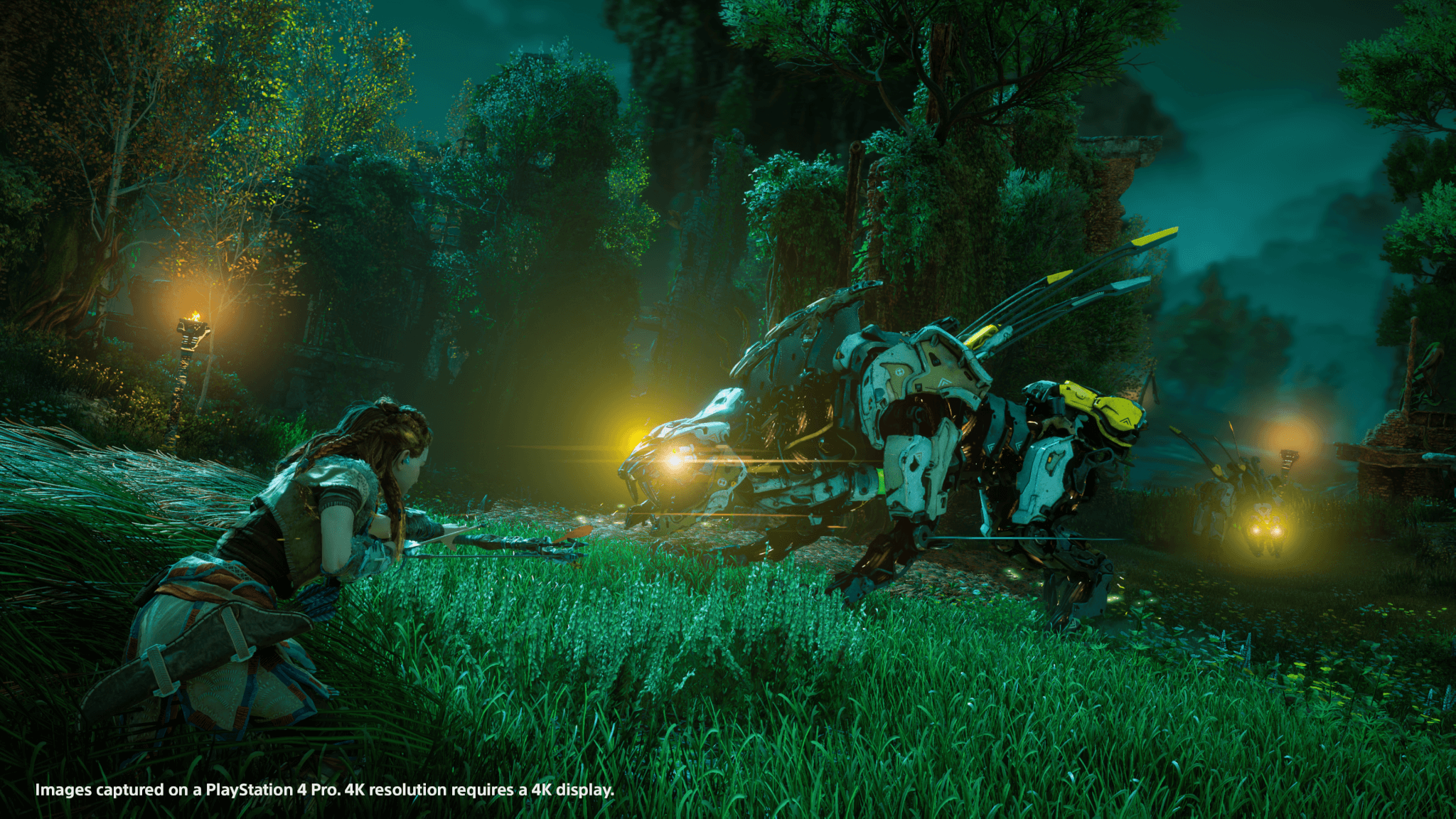 Above: Take him down!

So, what are you actually doing in this world? Have you played the recent Far Cry or Tomb Raider games? It’s a lot like that. You can tackle fights either with stealth or brute force, relying on a bow and arrow to do most of the work. You have to craft things like ammo, traps, and potions with items you find in the open world, either through harvesting plants, looting enemies, or hunting wild life. And, just like in those games, you earn experience points that you can use to learn new skills, like the ability to instantly kill enemies with new stealth techniques.

Yes, it’s familiar. But the execution works, and it does have some unique elements. Besides her bow, Aloy has an arsenal of tools and traps that she can set up before a fight to give her an advantage. And while you can tag enemies similarly to Far Cry, making them easier to track, you can also highlight their patrol paths, which helps you avoid them or plan an ambush.

Horizon stands out because of what you fight: robots. Most of them have animal-like qualities. You’ll find robot versions of cows, alligators, birds, and more. And some of them are huge. Fighting these is awesome.

For smaller robots, you’ll usually want to rely on stealth to pick them off one-by-one before they can alert others to your presence. For the big guys, you need to set up traps and have a game plan before engaging them. And even during fights, you need to do a lot more than just spam arrows. You can scan enemies and find weak points, and you can even shoot off parts of their bodies. This will disable some of their attacks. For example, blast a turret from a robot’s hide, and it can’t fire at you any more. Even cooler, you can then pick up that weapon yourself and use it against the robots.

The fights are epic and intense, and the designers do a great job of escalating enemies. Once you’re comfortable fighting a certain kind of robot, you’ll discover a meaner species that you have to battle. Horizon’s difficulty scales well, keeping fights challenging even as you unlock new abilities and more powerful weapons. 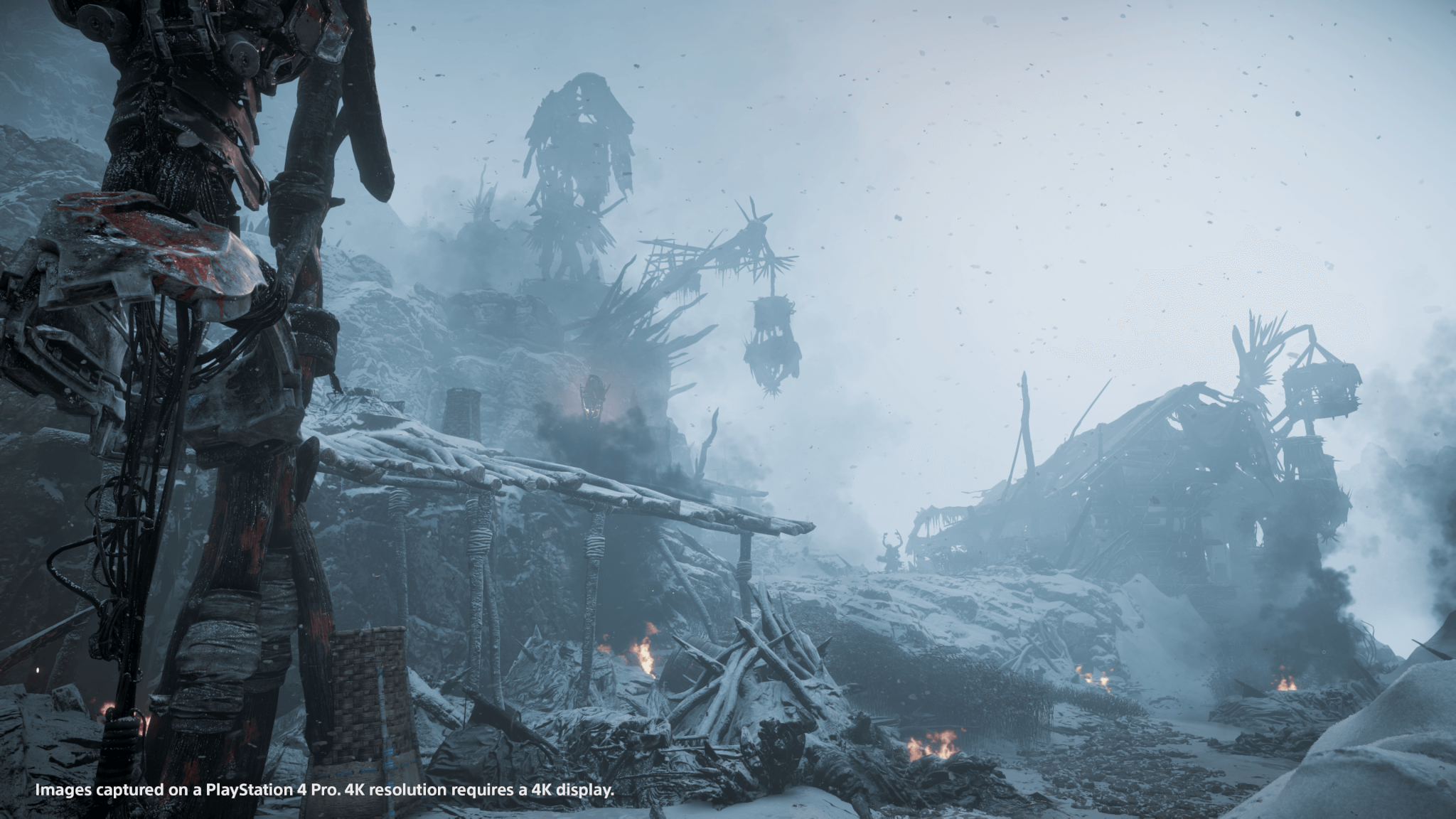 Horizon has a good story, but its presentation sometimes feels flat. Animations during look realistic, but characters talking to each other often look almost as robotic as all of those machines that your killing. They often stand perfectly still, eyes rarely displaying much emotion. Animations during cutscenes also look stilted, like they’re accidentally running just a bit slow.

The camera during story moments also has its issues. It’ll awkwardly cut from a mild close-up of a character’s face to a … slightly closer view of their head from the same angle. It’s a strange camera move that doesn’t look cinematic. Also, sometimes the camera will cut to a new scene, but it’ll take a second for characters and buildings to pop into the environment.

Horizon has an interesting story to tell, but it doesn’t always tell it all that well. A lot of the main story missions take you to places that are exposition-dumping grounds. You don’t fight much of anything (if anything at all), instead you just walk around, trigger cutscenes, and listen to audio logs.

It’s fine to have some slow moments, but these sections are too frequent and don’t give you much to do beside walk toward the next objective. Sometimes you’ll have to do some Uncharted-esque climbing or solve a puzzle (really, there’s only one kind of puzzle in the game), but it’s not enough to break up the monotony. 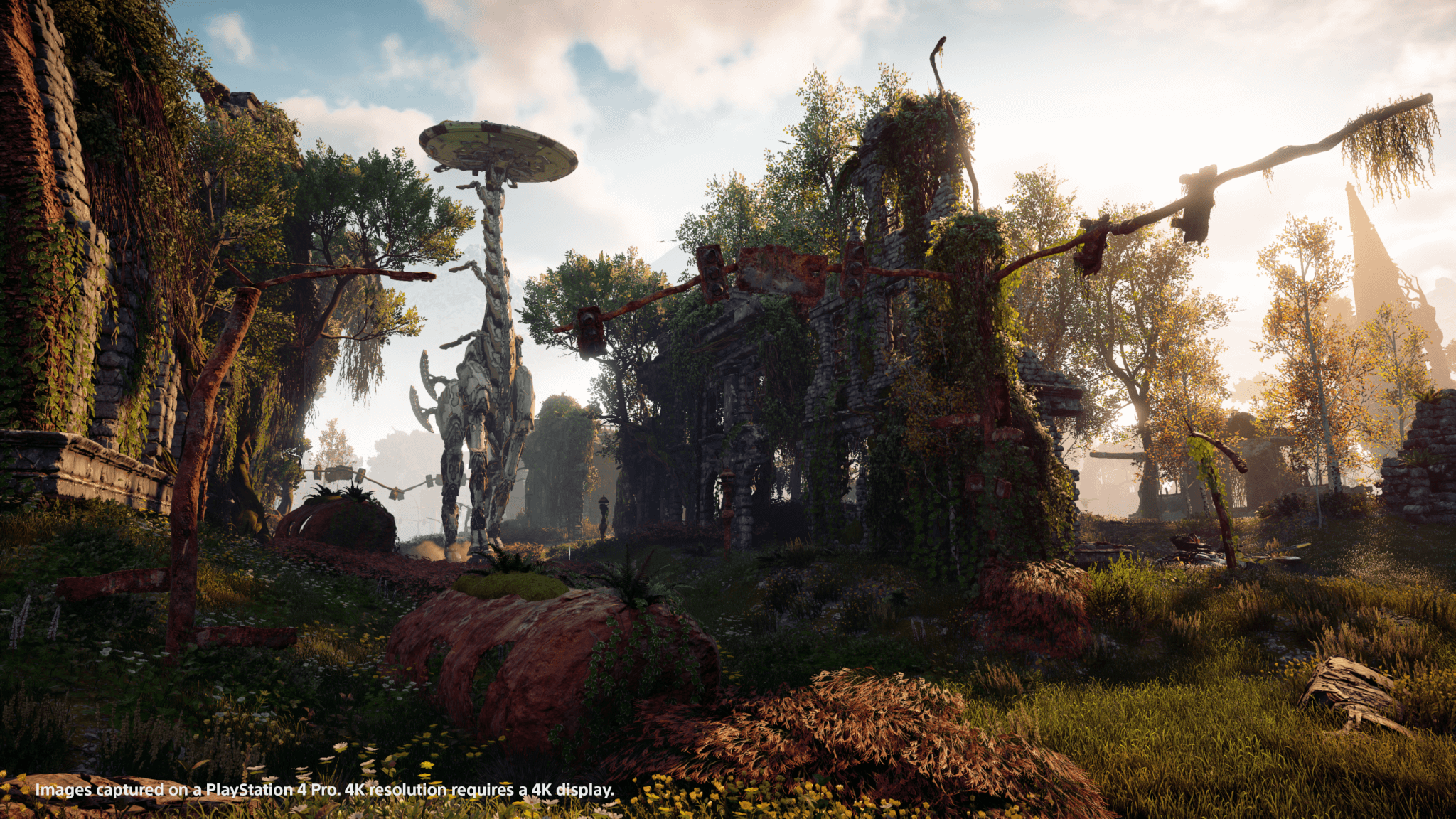 Horizon pits you against plenty of people, and it’s during these moments that it feels the most like a Far Cry clone. You’ll even sometimes have to clear out camps of bandits, an activity that most Far Cry fans could do in their sleep by now.

Thankfully, clearing out those camps is an optional activity. And, unlike in Far Cry, you don’t have to bother with unlocking fast travel locations. Horizon does a much better job than Far Cry of offering side-quests that actually feel substantial, with their own stories to tell.

Like with God of War and Uncharted before, Horizon: Zero Dawn should be the start of another PlayStation iconic franchise. It offers a gorgeous and interesting world rich with adventure (including plenty of giant robots to kill). While it borrows heavily from the likes of Far Cry, it’s a more interesting and less repetitive effort than we’ve seen from that series.

The presentation suffers a few hiccups, but it’s mostly a beautiful game. It’s also a long one. Horizon will keep you busy for a good chunk of time with its multitude of side-quests and extra activities.

This is one of the PlayStation 4’s most interesting exclusives.

Horizon: Zero Dawn comes out on February 28 for PlayStation 4. The publisher provided GamesBeat with a copy for this review.