Hothead Games is announcing that its Kill Shot franchise has been downloaded more than 65 million times since 2014. The series started with Kill Shot, and the Vancouver, Canada-based company followed that up with Kill Shot Bravo a year ago today.

That’s a pretty large number of downloads for a mobile game, and it shows that first-person shooter games that are so successful on the PC and consoles can also thrive on the touchscreens of mobile devices.

The original Kill Shot debuted in September 2014. That game was greeted with a lawsuit from rival Glu Mobile, which claimed that Hothead stole the idea and a lot of content from Deer Hunter 2014. That lawsuit has since been settled.

The games deploy players on military hitman missions to target enemy bases in strategic locations around the world. The game’s sequel, Kill Shot Bravo, took the FPS genre to the next level by adding social gameplay such as Alliance Mode and Player-versus-Player Sniper Duel Mode. 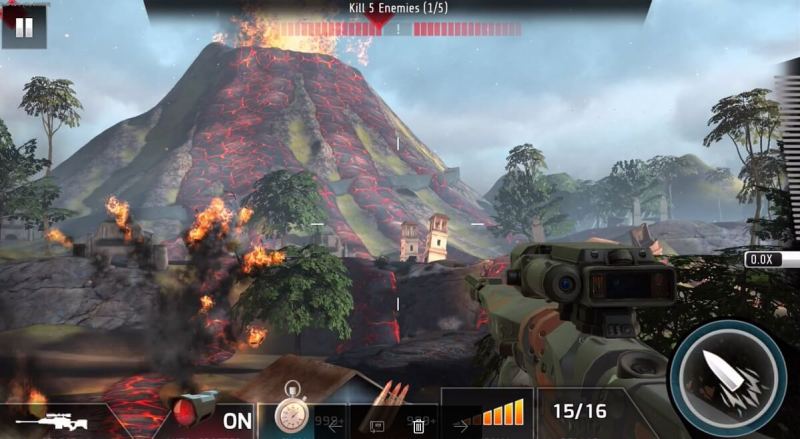 Above: Kill Shot Bravo is available on iOS and Android.

“The Kill Shot franchise has become one of the most successful shooter franchises in the history of mobile games,” said Vlad Ceraldi, Hothead Games’ cofounder and director of development, in a statement. “Players love the franchise’s realistic graphics, intense action, and social gameplay. We are thankful for all of the support from our players, and we look forward to releasing new games in the near future.”

To celebrate the anniversary of Kill Shot Bravo, Hothead is adding 50 new Primary missions and 5 Black Ops missions — all set in the midst of a volcanic eruption. The “Cataclysm” Region 17 update takes players from the frying pan into the fire as they breach their way into a secret base deep within the heart of the volcano.

More Battle Hardened and Assault missions and an arsenal of new weapons round out the hottest Kill Shot Bravo update yet. All players will also receive the anniversary-exclusive Bullet Skin, and top players will aim to compete in the new “Thanksgiving event” during Thanksgiving weekend where they can unlock new Thanksgiving-themed gear and weapons.