Hotline Miami 2: Wrong Number probably made my neighbors hate me.

Developer Dennaton Games’ latest blood- and neon-soaked shooter, which is out now for PlayStation 4, Vita, PlayStation 3, PC, Mac, and Linux, had me swearing at my MacBook with every mistake I made. Every wrong step, poorly timed room entry, fumbled button press, or just plain bit of bad luck left my poor, pixelated murderer lying in a pool of blood. Most of it was his. Usually.

And every time I broke free of my cycle of trial and error and performed The Perfect Run, I still yelled because that crap was exciting.

My point is that I sent several people’s shares of “Holy shit,” “Son of a bitch,” and their more extreme siblings through my bedroom wall, and the elderly woman who lives on the other side probably wasn’t a fan of any of it. And maybe I’m a terrible neighbor for not caring, but to be fair, I was having an awful lot of fun. 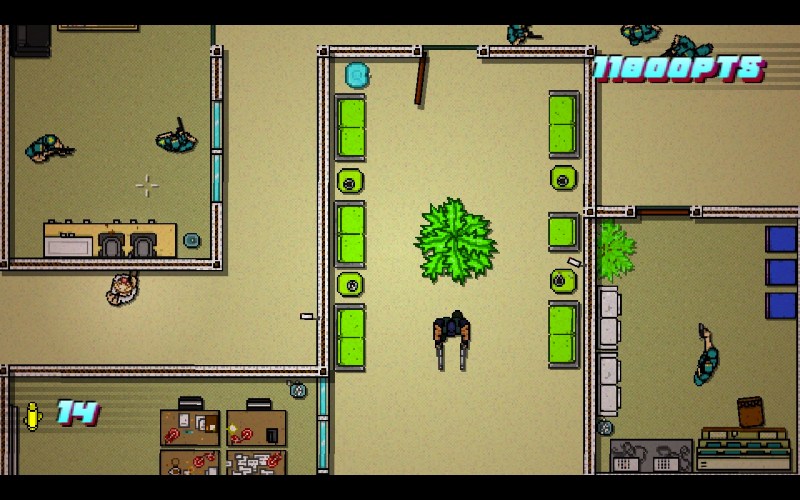 Above: The badass cop in the middle room takes his job very seriously.

The retro aesthetic charms while it pummels you

It’s hard to describe a game as brutally violent and occasionally terrible (thematically) as Hotline Miami 2 as “charming,” but the innocence of the visuals provides an interesting contrast to how many of those pixels end up being red.

Hotline Miami 2 takes place in the late ’80s/early ’90s, and it has graphics to match.

You will blow people’s heads off in this game. You will jump on defenseless enemies and slit their throats. You will use powerful shotguns to blast enemies’ torsos apart and leave them sleeping eternally under a comforter made of their own intestines. It’s horrible, but the top-down perspective and quaint graphics remove you from these events. You watch them unfold from above, every cloud of bloody mist and guard-dog carcass rendered in tiny squares, your victims’ faces indistinguishable from one another. And while you will react with some combination of revulsion or morbid fascination, you’re never quite a part of your own actions.

And as I plowed through my trials, learning some lessons on one attempt, forgetting them the next (but generally moving toward that one go that would leave me the last one standing), I found myself falling into each level’s rhythm: move, lock, shoot, feint, hide, ambush, shoot, lock, shoot, move, door, punch, lock, shoot, shoot. The repetition further removed me, although I was fully invested, and I realized that this is how the world feels to its collection of amoral and vicious characters. It was a lesson in how it feels to be a sociopath or what one must do to live and work among them.

And that kind of creeped me out, so the good news is that I am not, in fact, a sociopath. Thanks, video games! 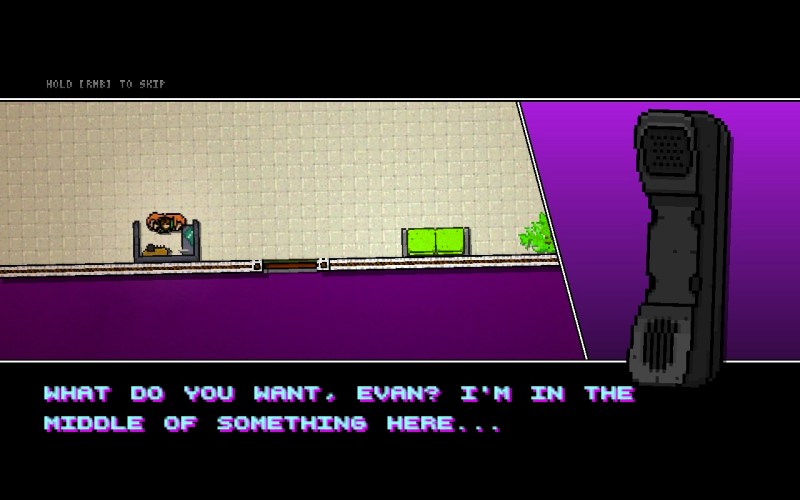 Above: I’m just writing my review! What the hell, phone?

Instead of controlling one mass-murderer with a bunch of masks, you get several “fans” of the first game’s main character, and each has his own abilities. One can dodge, another can kill enemies with thrown objects (instead of just stunning them), the third delivers lethal punches but can’t pick up weapons, and so on.

The most interesting playable character is actually two guys; one has a chain saw, the other has a gun, and you control them simultaneously. You have to keep both of them alive, so this setup is for players who didn’t think their guy presented a large enough target for all the men with guns looking to make them past tense.

In some levels, you aren’t even playing as these masked assholes, and it introduces special conditions. One of the most interesting ones has you choosing between a shotgun and an assault rifle at the beginning of the mission and then limiting you to that weapon and your back-up knife only. You can refill your ammo at boxes on every screen, but you can’t grab new weapons off of the people you take out. It’s a cool restriction that forces you to approach those levels differently. 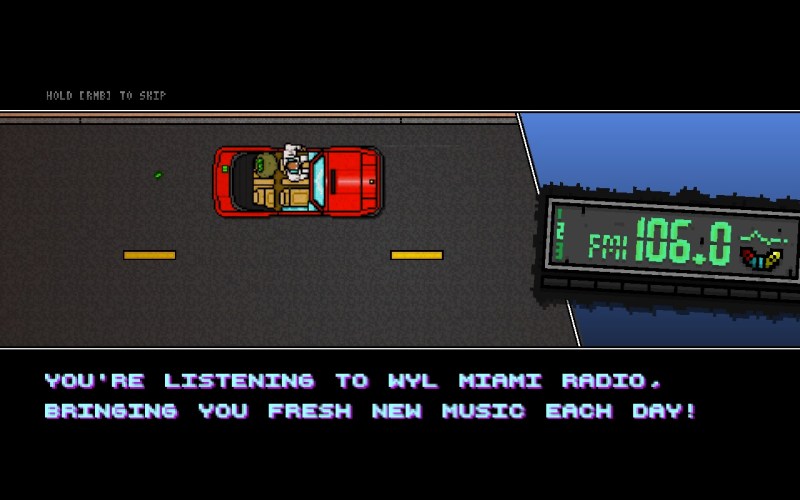 Above: The soundtrack is great, even if it does say so itself.

The new soundtrack is just as amazing as the last one

Fans of the original’s tunes will find even more thumping, synth-heavy tracks to murder to, and if you haven’t heard it, go check out that and the similarly great soundtrack to director Nicholas Winding Refn’s brilliant crime film, Drive. And then listen to them and envy those who have committed brave and terrible deeds with that music playing in the background.

Or just drive around with either of them playing and feel super-awesome. Because you will.

Sometimes, my screen would contain more nostalgia and murder than it could handle, apparently, and Hotline Miami 2 would lag. I was playing on a late-2011 MacBook Pro, so it wasn’t the absolute latest in gaming hardware. But this also surely isn’t the most processor-taxing game I’ve ever played on it. The slowdown usually worked out in my favor, because it gave me a little more time to react. And that’s the only reason I’m pretty sure it wasn’t some kind of nostalgia Easter egg — this game would never go out of its way to make things easier on you, even if it was period-authentic.

In another level, an enemy wandered off the screen and wouldn’t come back. And that’s a sound tactical strategy, but it wasn’t doing me any favors considering that progress depends on every baddie making himself available for killing. So I had to reset the level, and that’s just not something you want to have to do too often in a game that punishes you enough for your own errors, let alone the ones it commits.

Hotline Miami 2 builds on the already great gameplay of the original with new characters, level types, and strategic decisions. Fans of pixel art and retro-style challenge will have a blast.

Hotline Miami 2: Wrong Number is out now for PlayStation 4, Vita, PlayStation 3, PC, Mac, and Linux. The developer provided GamesBeat with a free Mac download code for the purposes of this review.