Microsoft’s deals to buy or build five game studios could shake up the balance of power in the game industry, and these moves were the biggest news to come out of its 2018 Electronic Entertainment Expo (E3) trade show presentation yesterday.

Back when Microsoft entered the Xbox business in 2001, its leaders bragged at the time that it had dedicated more than 1,000 game developers to the cause of making games for its original video game console.

During the console wars that have ensued, Sony has always had something like a 2-to-1 game talent advantage over Microsoft. And that’s why you see huge exclusives like Uncharted, The Last of Us, God of War, and others coming from Sony, and it’s why Microsoft’s roster of exclusives gets thin after Halo, Gears of War, and Forza.

Xbox chief marketing officer Mike Nichols said in an interview with GamesBeat that the company is committed to investing in the games space to remain competitive.

As Microsoft said it was buying or had bought five game studios on Sunday, including Hellblade: Senua’s Sacrifice maker Ninja Theory and We Happy Few creator Compulsion Games. That should add a lot more development talent, which is a finite resource in the game industry, to Microsoft’s ecosystem.

“No doubt, we wanted to communicate that to fans,” he said. “We know that people fell in love with the original Master Chief or Gears of War back in the day. We just want to do more of that.”

Ninja Theory’s leaders created a video explaining why they sold to Microsoft. They pointed out they nearly went out of business four years ago as hundreds of studios were closing. They soldiered on and made one of the best games of 2017: Hellblade. But financing high-end, risky games was very difficult. Ninja Theory said it might take them another five to eight years to get an equally risky game done in the future. 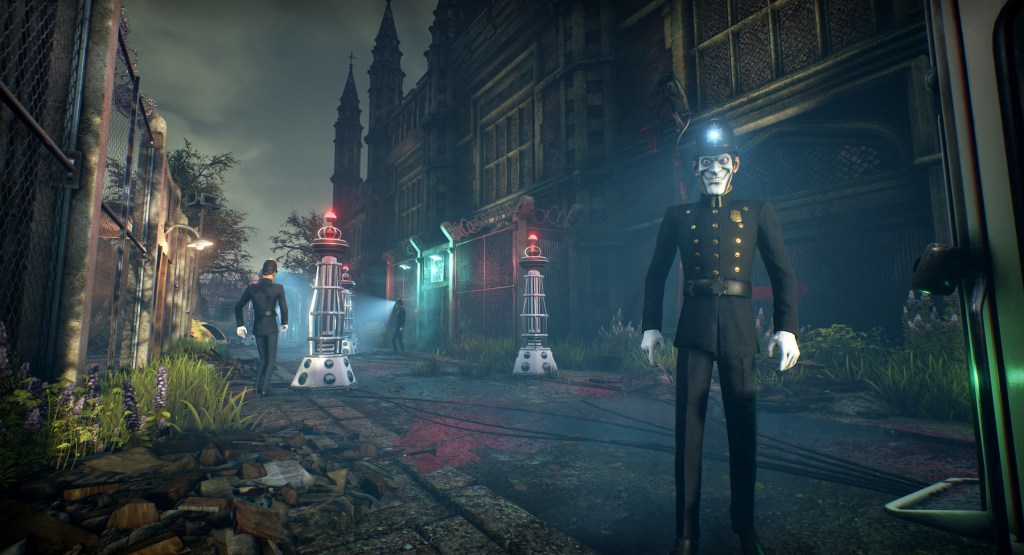 Above: Microsoft now owns Compulsion Games, maker of the upcoming We Happy Few.

“We wanted to be free from the triple-A machine and make games focused on the experience, not monetization,” said Ninja Theory chief creative director Tameem Antoniades in a video for fans.

They said Microsoft promised to give them their independence, and it wanted to help them invest in doing bigger and better things. Ninja Theory checked with other Microsoft studios like Mojang to see if Microsoft had lived up to promises.

Microsoft’s track record on this front will help it draw new talent. One of its new studios, The Initiative, is being set up by studio head Darrell Gallagher in Santa Monica, California. That’s a hotbed for game studios, and it gives Microsoft a chance to recruit some of Sony’s talent.

Nichols acknowledged that much of this activity is being prompted and supported by Matthew Booty, who was appointed head of studios at Microsoft by Xbox chief Phil Spencer. Booty’s role was to facilitate strategic moves such as acquisitions.

“Most important will be to get behind the idea that we live and die by the great games we make. Content is extremely important to our strategy going forward,” Booty said to me in January. “That’s the approach I have, to come into it as a service role, as an opportunity to provide a layer of leadership and help to the studio heads, so they can focus on making great games.”

To me, these deals are the strongest signals yet that Microsoft is serious about being a long-term player in games, and it is doing what it needs to do as a platform owner to remain competitive with Sony, Nintendo, and any others that want to steal its talent.

Ubisoft, by the way, has 14,000 employees, many of them making games for all platforms.