Adam Orth came up for air briefly to talk about Adr1ft, an immersive video game where you play an astronaut who is stranded in space and has to find a way back home. It sounds a lot like the movie Gravity, but Orth swears he came up with the idea independently, while he was recovering from a deep funk and a career fiasco.

In April 2013, Microsoft game developer Orth said some unfortunate things on Twitter, while he was in a public discussion with friend. He showed little sympathy for Xbox fans who didn’t want the next console, the Xbox One, to have an always-on connection. He insulted some fans, it spiraled out of control, and Microsoft fired him. That setback happened in part because a complete misunderstanding by some fans about what he was talking about in the first place, but in the end, that didn’t matter. He lost a pending job offer, and had to examine his whole state of being. He has talked about how he created his new game studio and a beautiful game as a kind of redemption for his personal nightmare.

Being cut adrift from his job spurred him to come up with a metaphor that became the foundation for Adr1ft. He told us about it at a recent preview event where we tried out the latest version of the game, including an experience in virtual reality using the Oculus Rift VR headset. The game is being published by 505 Games, and it will debut on the PC, Xbox One, and PlayStation 4 in September. Here’s our edited conversation with Orth. 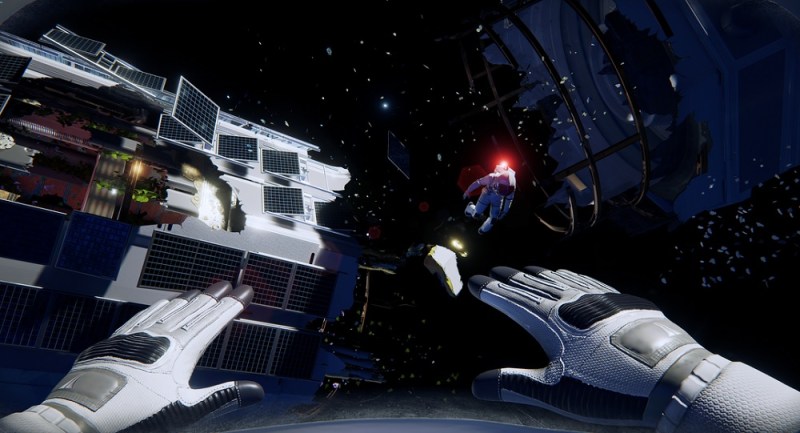 Above: Adr1ft is about waking up, lost in space.

GamesBeat: Can you tell us about the inspiration for Adr1ft?

Adam Orth: We have a pre-beta build of Adr1ft. We are three weeks away from finishing the game. It’s about 20 minutes into it. It gives a good indication of what is happening in the game. We’ll have a completely new different demo at E3. It’s a story about my personal experience with Twitter a couple of years ago. I may or may not have said something stupid on the Internet, and the Internet may have vilified me for it. It’s a metaphor for what happened to me. Adr1ft is the story of Alex Oshima, the commander of Hardiman Aerospace Northstar IV. She wakes up floating amidst the debris of this destroyed space station, no idea who she is, how she got there, in a badly damaged EVA suit that is leaking oxygen. Your goal is to simply stay alive and get home. You accomplish that by exploring the totally destroyed space station, repairing your suit, bit by bit. Throughout the game, you have upgrades to your oxygen capacity, your propulsion pack. You start the game a little gimped. As you go along and repair your suit, you become more adept. You also repair mainframe computers to bring the emergency escape vehicles online. As you do that, you find the other crew members who perished in the event. We hear their stories through computers, audio logs, intercepted transmissions. You learn who you are and what happened in your story through learning what happened to these characters. The story is told out of sequence, Pulp Fiction style. It all wraps up nicely.

GamesBeat: You’ve talked about how this is not inspired by Gravity?

Orth: It’s probably pretty hard to believe. When I was underground, after the Twitter thing, I was trying to figure out what I was doing with my life. I came up with this idea. I just didn’t know. About a month into this, I discovered it on the Internet. Then I went into my room and cried for a while. Then I realized that was not really the point of all this. That’s OK. There is plenty of room to have a game like this. We have some similarities, obviously. It’s a very different experience than Gravity. Gravity has helped our game immensely. If people compare this game to Gravity, I’m going to take that, because it’s a great movie.

GamesBeat: How far do you carry the real-life experience into the game? The experience of being adrift, I can understand that’s a metaphor, but is there more to it as you go through the whole game?

Orth: You hear the stories of these other characters. They’re just normal stories of normal people. This isn’t a sci-fi movie or anything like that. It’s just normal people in an extraordinary environment. You end up hearing slices of their life, really. I wanted to make sure that I wrote normal characters that everyone could relate to. There’s nothing supernatural, no aliens, nothing like that. Just people working for a better earth in the future, and then this terrible thing happens, as sometimes they do.

Like I say, I wanted to make stories and characters that hopefully resonate with people because they’re not typical video game stories. A lot of those stories took bits from or were influenced by things that have happened to me in my life, or to people that I’ve known. When I made the decision to make a personal game, I went all in. 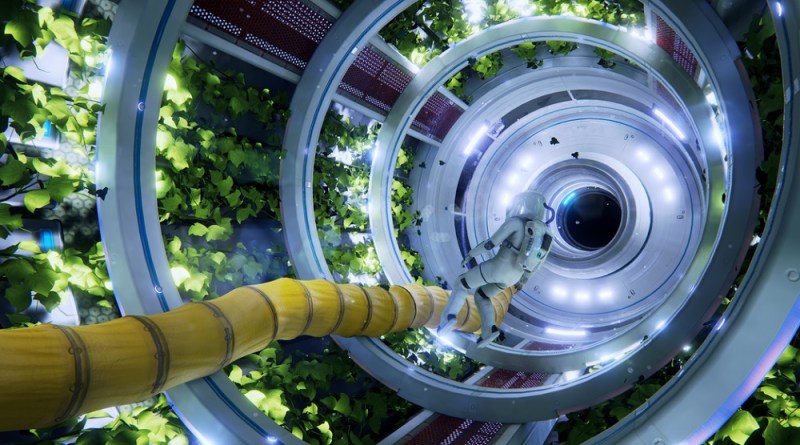 Above: You make your way through fragments of a space station in Adr1ft.

GamesBeat: It’s more than delivering the experience of being adrift. Is there a statement you feel like the game is making, a conclusion you want to push people toward?

Orth: There is one for me, but it’s open to interpretation. That was intentional. The ultimate thing, what I would love, is that when people finish the game, they had a moment to say, “Wow. Something in there resonated with me. There was a parallel in my life. Maybe I can learn something.”

Like, when I went through the whole Twitter thing, I had to accept that that happened and grow from it and fix the problems I had with myself and become a better person. That’s really what the game is about.

GamesBeat: Making some personal choices? Is that the thing everyone would relate to?

Orth: I hope so. But there could be little bits — one of the characters is a doctor, the doctor on the station. He’s a recovering addict. He lied to get his job. He’s struggling up there under the weight of the lie. The mission’s not going well. It’s been extended. He’s being challenged.

His whole story is told through him being a speaker virtually attending an AA meeting on Earth. It’s a unique thing in a game. I’ve never seen that in a game before. But it’s also real. Things happen. People have problems. I just didn’t want to make a save-the-world game.

GamesBeat: Even though there’s a sci-fi setting, then….

Orth: The setting is amazing. Everyone loves that. It enables gameplay. But ultimately it’s still just an office in space.

Orth: Yeah. I’m sure we all know someone who struggles with addiction. That’s a real thing. I know people like that. It’s definitely been a thread through my life, although not personally. I just want to tell stories that hopefully resonate with people in a way where they can say, “I got something out of that game.” But I also want to entertain them. That’s where the space part comes in. It allows us to have a cool game mechanic, floating around in space, everyone’s fantasy. 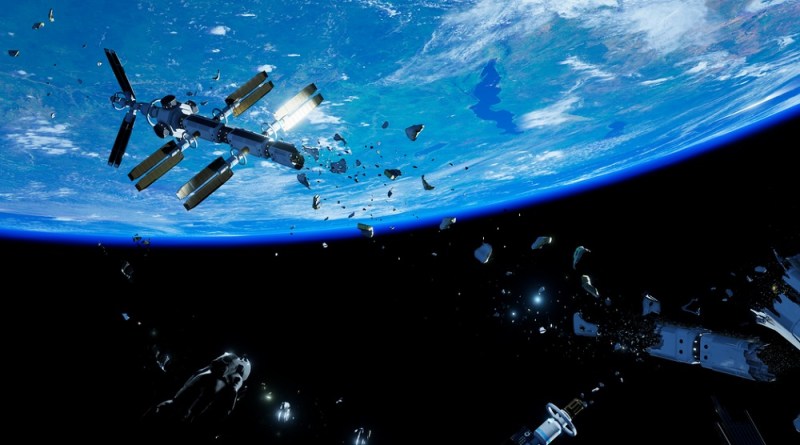 Above: Adr1ft has beautiful 3D graphics.

GamesBeat: Did you put a lot of thought into figuring on the controls, what you could and couldn’t do?

Orth: We spent a lot of time on the controls. Very early on, we made a conscious decision to grow the experience rather than worry about what’s real and what’s right. It’s more about the experience. We do a lot of immersive audio design in the game. That may or may not actually happen in space, but once you start going down that road, you can’t enjoy Star Wars. Nothing would work. I’d rather have a good experience for people than have a perfect space simulator.

GamesBeat: The ability to do things while you’re weightless — it seems like you’re able to do quite a bit.

Orth: The fantasy of picking up stuff you couldn’t normally pick up, moving stuff out of the way because it’s floating there, dodging giant things coming at you, it’s pretty compelling as a game mechanic.

We have a very cool movement mechanic. Oxygen is a shared resource between health and movement. You have this damaged EVA suit, but your propulsion pack is also damaged. You’re taking your oxygen and using that as a resource for movement and staying alive. Your suit is very slowly leaking oxygen, always. When you use your propulsion, that depletes it faster. You have to make little decisions about, “Do I go for this oxygen canister, or do I keep going over here?” All these micro-decisions. If nothing else, it’s stressful.

GamesBeat: How did you modify the game to work in VR?

Orth: For VR it’s a bit — it’s still kind of the Wild West right now. Nobody really knows the rules for VR. We don’t even know what the best Adr1ft experience for VR is. We do things in the traditional game that may not work really well in VR. We’re trying to find what the best Adr1ft VR experience per platform is. Which is difficult, as a developer. But it’s not unlike making a mobile game. Four billion phones and you have to make sure your game works on all of them. We don’t know yet. But we’re doing it for all of them. 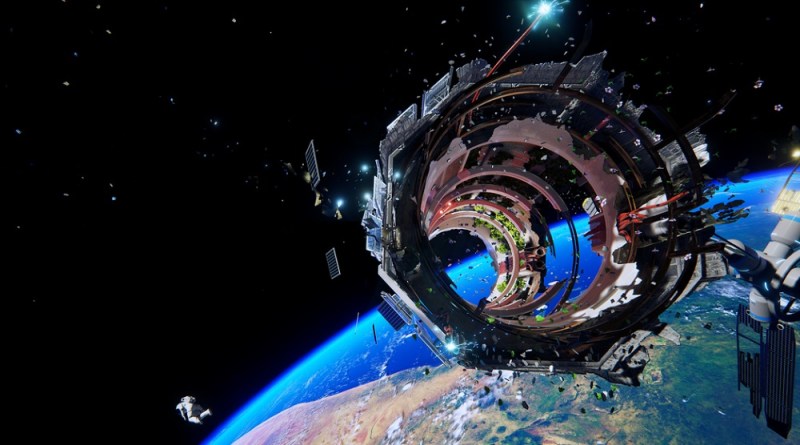 Above: Your space suit is leaking air, and your space ship is toast in Adr1ft.

GamesBeat: Is it about the angles from which you can view things?

Orth: No, it’s more like—We have a lot of scripted moments in the traditional game. You grab a door and open it and stuff. You have freedom of movement most of the time, but we take it away for moments like that.

GamesBeat: That would create an awkward moment, where you’re suddenly zooming to a scripted sequence.

GamesBeat: Is there a lot we still haven’t seen from the rest of the game?

Orth: Yep. We’re purposefully not showing a lot. As I said at E3, it’ll be a brand-new thing. We’re working hard to make sure it’s ready.

GamesBeat: How large a team did you have?

Orth: We worked for about 13 months with a core team of six developers and a rotating stable of contractors. We’re using Unreal 4, which allows us to get access to really seasoned professional, senior game devs. They know the tool set. And because we’re a virtual company, we don’t have to ask them to move across the country.

We operate kind of like a film studio, almost. “Okay, we need an animator for three weeks.” Go and find an animator. Through this process we found a good core group of contractors, and hopefully they’ll be with us through the next game, which we’re already working on.

Orth: I wouldn’t say it went smoothly. It’s our first time together making a game as a studio. Things never go smoothly in game development. But we learned a lot.