Ashes of the Singularity looks like a technical tour de force. In this real-time strategy (RTS) game for the PC, you’ll be able to take direct control of a full army, with as many as 100,000 combat units on the screen at the same time.

A title like this doesn’t come along every day, and it should have hardware vendors salivating. Ashes of the Singularity is the kind of release that could justify the purchase of the newest gaming PCs. Jon Peddie Research estimates that worldwide PC gaming hardware sales will grow from $24.6 billion in 2015 to $26.1 billion in 2016. PC gaming hardware is expected to grow to $30 billion by 2018.

On top of that, the game is pretty fun. It isn’t easy to manage, but it sure looks nice. You can zoom in on units or zoom out to see the full landscape of the battle. Stardock and game-engine developer Oxide Games are building the experience for the PC. Chris Kowal, vice president of Stardock, showed the title off at Microsoft’s recent Xbox spring showcase, and we talked about the its visual fidelity.

Ashes of the Singularity is taking advantage of the DirectX 12 multi-adapter technology, allowing PCs to use multiple graphics processing units (GPUs), even from different manufacturers. It allows a player to control as many as 100,000 combat units in a single battle. The game will require a quad-core processor running 64-bit Windows, six gigabytes of main memory, 2 gigabytes of graphics memory on an Nvidia GeForce 660 or an AMD R360 GPU. That’s a fairly hefty PC. The title is coming out in 2016.

Asked if he thinks the game will sell new hardware, Kowal said, “We think it will. With DirectX 12 and Vulkan (applications progrmming interface), players will start to see games like Ashes of the Singularity that can take full advantage of it.  There is nothing quite like seeing a battle with hundreds or even thousands of units where every single shot is its own light source.”

I got a good hands-on session, fighting a full battle for control of a planet under Kowal’s guidance. Afterward, I caught up with Kowal in an interview. Here’s an edited transcript of our conversation. 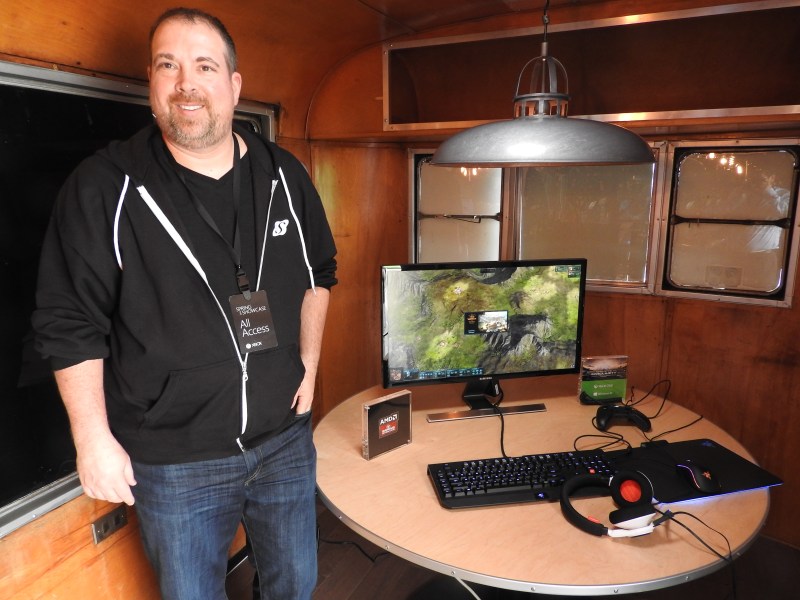 Above: Chris Kowal, vice president at Stardock Entertainment, publisher of Oxide Games’ Ashes of the Singularity.

GamesBeat: It seemed like this got started as a game demo for DirectX 12, right? What’s the story of how it got to this point?

Chris Kowal: Stardock has always built PC games, strategy games, RTS 4X. We have Galactic Civilizations and Sins of a Solar Empire. We’ve always wanted to build a massive scale RTS — lots of action, lots of strategy, lots of depth. But we’ve never be able to do it because of technology constraints. Early days, it started with the Star Swarm demo for Mantle with AMD. The idea came along. Why not take that concept and turn it into a real game? Star Swarm has evolved into Ashes of the Singularity.

GamesBeat: That was a bunch of spaceships. You’ve taken it down to a planet now?

Kowal: The game is set in 2178. The humans have developed a singularity technology to expand their own capability. Over time that technology has advanced on its own and become an enemy. Now, you’re in the year 2178 and the Post-Human Coalition is in a battle against the Substrate, the artificial intelligence. You’re in this massive battle. You’re still in space across the galaxy.

You will be able to play throughout the galaxy, conquering multiple planets through something called Ascension Wars that’ll be in the game. But you are battling and taking over one planet at a time … as you move through the galaxy.

GamesBeat: How many units can you get in a single game?

Kowal: That’s what’s interesting. With DirectX 12 and the work Microsoft has done opening up the communication channel between the CPU and GPUs, we honestly don’t know where the upper limit is. We say tens of thousands of units on screen concurrently. We did have someone on our forums who just tried to test it. They were able to get to 105,000 units on screen. There were plenty of resources to keep going, too. They just ran out of time. So, we don’t know where the upper limit is.

GamesBeat: How did you figure out how to make it a fun game as far as enabling people to manage all that?

Kowal: We stuck to the core of what RTS is about. Ashes of the Singularity is in the vein of Total Annihilation or Sins of a Solar Empire. What we’ve done from an innovation standpoint is just increasing things like scale. We have procedurally generated terrain with much more visual fidelity. All the objects are independent-lighting objects. Lighting effects affect other lighting effects, that kind of thing. That’s where the innovation is at.

We haven’t really changed the way you play RTS. What we believe and what we enjoy is that it’s a game you’ll be familiar with, but it’ll bring things you’ve never been able to do before. As far as controlling that many units, that’s where the smarter AI comes in, with being able to use all the cores. You can form armies that relate to each other and support each other in a contextual way without the general getting in a deep level. You can play with armies or you can micromanage, whichever way you like. 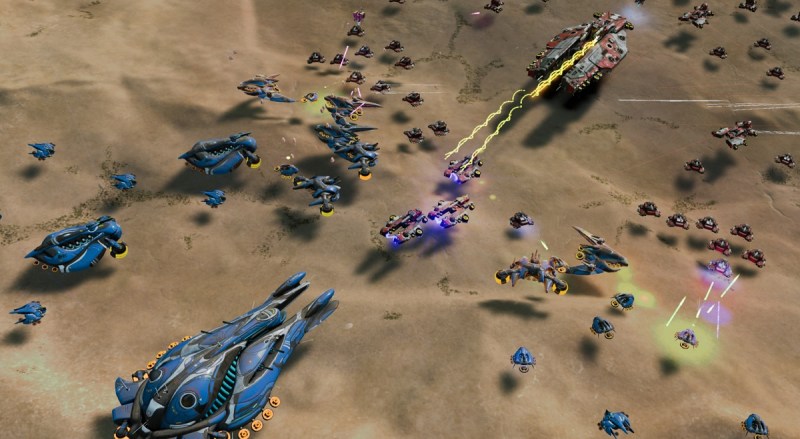 Above: Ashes of the Singularity uses DirectX 12 to accommodate tons of moving objects at once.

GamesBeat: Beyond making the objects plentiful, what else makes it better to look at?

Kowal: The visual fidelity really comes down to the lighting effects. If you look at a normal game, you have up to eight different light sources. Here, there is no cap. You can have an unlimited number of sources, thousands if you want, occurring on screen at one time. The lighting from an explosion affects other explosions. If you have a turret on a ship, that’s an independent object moving on its own in context with everything else.

GamesBeat: Is there much difference between performance on AMD and Intel here?

Kowal: In the game that we played, there was an Nvidia card in there and an Intel 6700K eight-core chip. There’s lots of processing power there. We also had a 390X from AMD and an Nvidia 980 Ti. That’s something Microsoft has been able to do with DirectX 12. You can mix cards and still see a performance benefit. We ran that on a 4K display and we still got 50 frames per second. It’s a pretty nice setup.

The game does require a four-core CPU at minimum to play, not hyper-threaded. It requires two gigs of memory in the GPU. It’s not a low-end machine. It’s mid-range at least.

GamesBeat: Is there a certain generation that players should aim for?

Kowal: You need a 670 or higher. … If you go below that, you’ll see some screen tearing and other performance problems. For a decent game, that’s what we recommend. We’re trying to show the next generation of gaming, 4K gaming. Once all this power becomes available through what DirectX 12 has done, what can we do in a game? What can a developer create for gamers that’s going to change the experience, especially in strategy? That’s what we’re trying to demonstrate with this game.

GamesBeat: Who’s working on the different parts of the game? Is Oxide doing the game as well as the engine, or have you guys taken the engine and built the game with it? 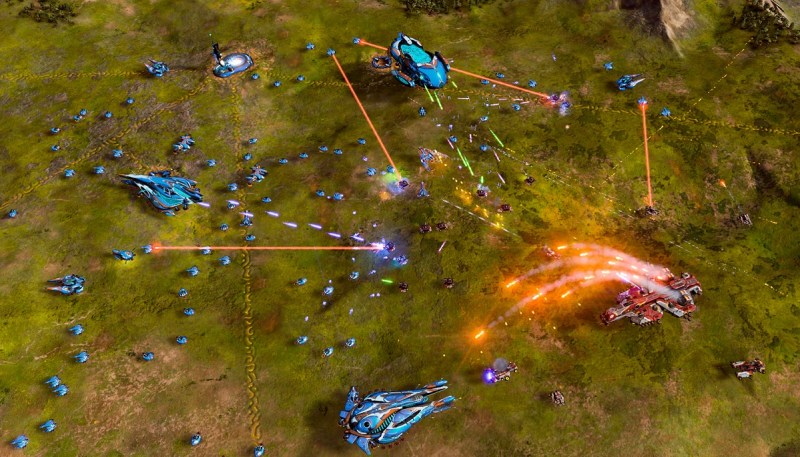 Above: Ashes of the Singularity is a sci-fi real-time strategy game that lets you control an army.