Destiny has a unique look as a sci-fi shooter, and that’s by design. It’s not just because some of the action takes place on Mars, the red planet. It’s because some of the artists behind it — part of a 500-person team — wanted to make a place that was not just a gray, post-apocalyptic world. They wanted something hopeful, according to Jason Sussman, a senior environmental artist on the game.

We’ve gotten a good look at Destiny in its alpha test form. Publisher Activision believes that developer Bungie‘s new game is destined to be its next billion-dollar franchise. Chief exec Bobby Kotick said so in a recent call with analysts. Soon enough, gamers will be able to decide that for themselves.

The graphics look pretty on the PlayStation 4. You can view the landscape for miles without finding a flaw in the imagery. The lighting and shadows are realistic. The desert-like landscape looked more like Mars than Earth. It has realistic effects, like pools of water and deteriorated buildings. It has lots of brown, orange, and yellow colors and dust. When you go into an unlit building, the dark corners are scary.

The game ships on the Sony PS4, PS3, Xbox One, and Xbox 360 on Sept. 9. Here’s an edited transcript of our interview. 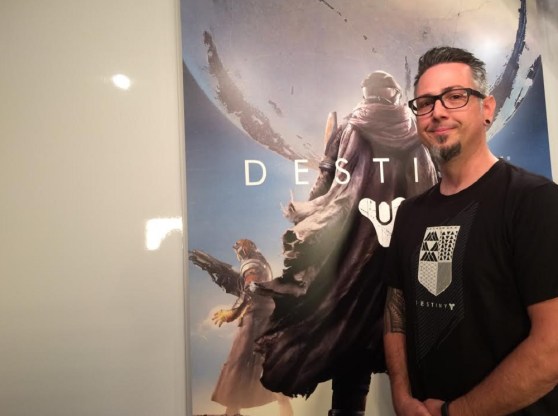 Above: Jason Sussman, senior environment artist on Destiny for Bungie,

GamesBeat: What is your job on this game?

Jason Sussman: I’m a senior environment artist. I was the lead over the Mars destination.

GamesBeat: How would you describe the style here?

GamesBeat: What are some of the differences between Mars and other locations?

Sussman: They all embody our goal, which was to take reality and amplify that, make it more majestic. We wanted to build a hopeful world. Even though humanity has been lost – you’re trying to figure out what happened to humanity – we wanted to build that up.

We don’t try to go — on Cosmo, for example, there’s a lot of abandoned buildings. A lot of things are kind of strewn apart. But the way we light it, the way we bring the color saturation and time of day together — we focused on time of day in each of the destinations. Through the span from day to night, we never wanted it to look bleak. We wanted to give some vibrance to the worlds. We’ve done that across the board. 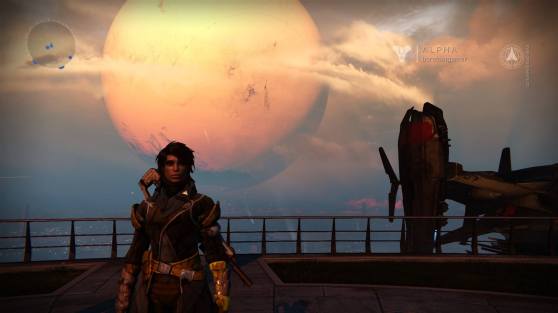 Above: A screenshot from the First Look Alpha of Destiny.

Sussman: Right. It’s not gray. It’s not that sort of rusted tone to everything. It’s much more vibrant and alive. It helps that you have other players coming and going in all these spaces. That helps liven it up.

GamesBeat: On each planet, what kinds of regions did you build? Whole cities or —

Sussman: What we’re showing in the alpha right now is just Cosmo, but we’ve done all kinds of different things to make each location an icon in its own way. You definitely know what destination you’re at when you go there.

GamesBeat: On Earth, will we recognize some places?

Sussman: Yeah. On Earth, it’s the old Cosmodrome in Russia. You’ll see humanity’s last steps to leave. You’ll see a lot of the ships and whatnot sitting out, abandoned.

GamesBeat: How long ago did you guys get started on that? What does it take to build a place like that?

Sussman: Over the years, we’ve built up to more than 500 people. We’ve pulled in talent from Pixar and other places that are now working with us. We have a lot of really talented people that we’ve built up around us over the years. I’m trying to think of a number of years. It’s been an idea in Jason Jones’s head for a really long time. The studio as a whole has been spinning up for quite some time, thinking about it. We’re taking this slow step toward reality. Alpha is a public step. It’s a way for us to genuinely get it out there and test it. 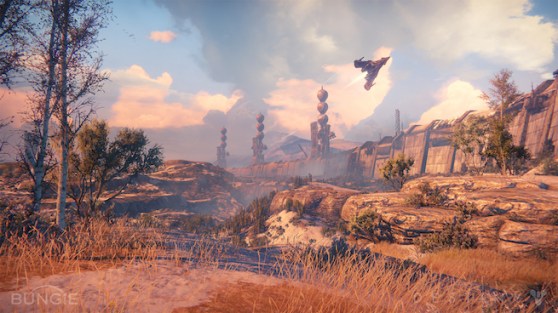 GamesBeat: Did you feel like you had to deliberately make something that looked different from Halo?

Sussman: That wasn’t our goal. I think Chris Barrett, our art director, has talked about how we went really high fantasy at first. We wanted to branch out and do something fantastic. Then we started falling back on some of the things that we know how to do really well, merging those worlds together. We weren’t trying, intentionally, to say, “Hey, let’s not make it look like this.” We just wanted to make something unique and special, not only to the players, but to ourselves. We wanted to do something new, something bigger, something different in all the right ways, but still remaining true to our foundation.

The development process, it’s been interesting. We go around and around with ideas. We’ve broken our game multiple times ourselves, internally, trying to figure out what’s the best way to do something. It’s all about balance, about how to deliver the best possible content to the right amount of people in the right way.

GamesBeat: I was thinking in particular about how everything looks destroyed. We’re in the aftermath of something, not the middle of it.

Sussman: That just goes with the narrative. Humanity has been lost and you’re trying to figure out what happened all these years later. What is the Traveler? All this stuff. Each of these spaces, each destination, tells its own story in a way. It may not be just destruction. It might be a degradation, like things are just falling apart. What was the last thing that people were doing here? You’re seeing some of those things within the environment as you play.

GamesBeat: What’s going to change between now and launch? Everyone’s going to see what it looks like pretty soon. What do you think they’ll notice at the end, when it ships?

Sussman: It’s already looking better. What people are seeing in alpha right now, we’ve already started improving on that. We’re actively testing the systems. We’re trying to push these new consoles as far as we can. We’ve pushed the 360 and the PS3 really far. We want to deliver, on all four consoles, the best possible experience. 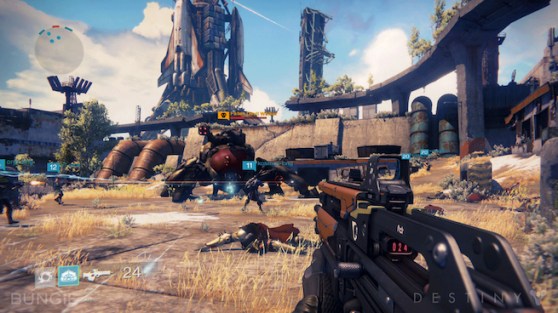 GamesBeat: Does the complexity of the art have something to do with that, or is it something else that means you have to target 30 versus 60?

Sussman: It’s a lot of different things. I could get really technical, but I’d bore you to death. A lot has to do with performance. We’re cross-platform, so we had to be very delicate with all four consoles, making sure they have the same experience, that it looks as good as it possibly can on all these consoles. A lot goes into that, from geometry to textures to post effects to particles to how many players you get on the screen. We’re always balancing that out to make sure everyone gets the same experience.

GamesBeat: So you do get a lot of characters on the screen at once.

Sussman: When you’re playing in the Crucible, yeah, absolutely. Same thing when you’re in a public space and a public event’s going off, with other players all running to one area that’s blowing up. Everyone’s throwing their supers, tossing grenades. You talk about everything going off at once, that’s where it happens.

GamesBeat: What are people going to notice that’s next-generation about the art?

Sussman: It’s the scale and scope of what we’re doing. The size of our environments and the amount of explorable space and the amount of A.I. in those environments, along with other players coming seamlessly in and out of those spaces. It doesn’t matter if you’re on a strike or playing a campaign mission or just roaming around. You’re constantly going to run across other people, seamlessly coming in and out. That feels very different to me. It’s not just a typical first-person shooter.

We’re doing a lot of different technical things that we haven’t done before. We have cloth sim on the players. We’ve rewritten our engine from the ground up. This is not the engine we used in the past. Every system has been amplified, from animation to the way we’re lighting the environment. We’re tuning in to every aspect of each next-gen console as much as possible.