Call of Duty: Warzone turned a year old last week, as it came out just as the pandemic lockdown began. The battle royale mode (with 150 players competing to be the last surviving team) was timely for people like me, who needed a great game as a distraction from COVID-19 while sheltering in place.

The result was 85 million-plus downloads for the free-to-play game, and to commemorate the anniversary, Activision and Twitter launched the Warzone Report, a social media campaign where players could get personalized stats on their Warzone performance in the form of a graphic that they could share on Twitter and other social media.

“It’s first time we’ve really done something innovative like this, bringing in game data to a consumer. So you know, you mentioned bringing stuff in game for us,” said Justin Taylor, a senior director of digital marketing with Activision, in an interview with GamesBeat. “That’s what we’re really excited about.”

On March 10, the Call of Duty Twitter account broadcast its #WarzoneReport, which called on players to fetch their Warzone stats from the past year. They did so by putting in their gamertag and typing “@Call of Duty #WarzoneReport” into a tweet. In return, they got a graphic with their personalized stats including kills, deaths, k/d ratio (number of kills divided by deaths), hours played, wins, and games played. The hashtag wound up trending worldwide on Twitter, said Rishi Chadha, the head of gaming content partnerships at Twitter, in an interview with GamesBeat.

“This is definitely one of the most innovative things we’ve done in the gaming space and on Twitter in general,” Chadha said. “The conversation happening around Call of Duty almost exclusively on Twitter. And so this is the opportunity to really marry that conversation and the content. The Call of Duty team has been one of our greatest partners.”

The players could share their stats and get bragging rights. My numbers (which you can see in the image above) establish my cred as a dedicated player, but not as a skillful one. I got three wins in the year, after 593 games and 164 hours played. I got 748 kills, but died 1,631 times for a Kill/Death (K/D) ratio of 0.46. I could access all of this information in the game, but the graphic made it easy to share my results on social media.

Warzone is now in Season Two for Call of Duty: Black Ops — Cold War, with upgrades earned in each installment. For Activision, it has also become important as the primary onboarding means for new player in the Call of Duty realm. Instead of playing just in the fall when each new game comes out, players can now play year round in Warzone or in Call of Duty: Mobile. 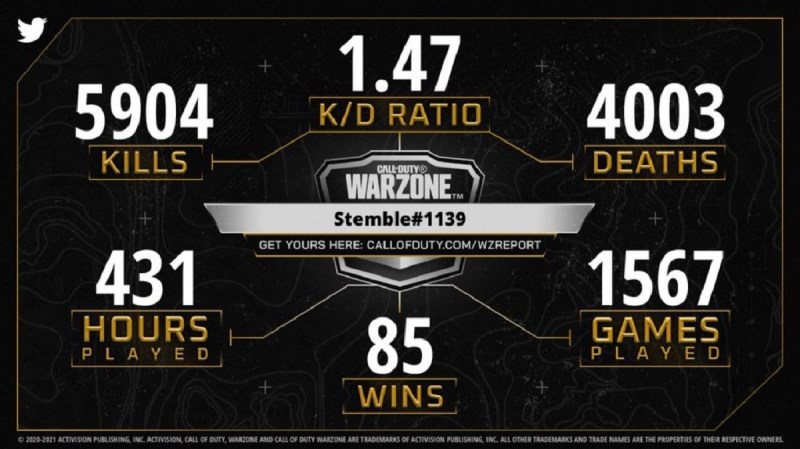 Above: Anthony Palma’s stats in Warzone.

Many players who start playing Warzone buy Call of Duty points with real money to play each new season, or they upgrade to the full games such as the current Call of Duty: Black Ops — Cold War. The result has been record numbers of players upgrading.

Activision has been staging events to draw Warzone players back. The company used Warzone’s stadium to debut the trailer for Cold War. And recently a cursed vessel known as the Vodianoy crash-landed on Warzone’s Verdansk map and spilled its cargo of zombies out into the city.

The Warzone Report gives you just a taste of the stats available. In the Call of Duty app, or in Warzone’s Record section of its Barracks tab, you can see your full stats. I can see, for instance, that I’m in the top 10% of players in terms of score, or total points earned. I’m in the top 12% of kills, but I am only in the top 18% for wins. In addition to my wins, I’ve landed in the top 10 about 84 times. Basically, that means I need to get better at closing out the game with wins in the final moments. But that means I have to shoot better or just get better teammates such as my friend Anthony Palma, who has a K/D ratio of 1.47, 431 hours played in 1,567 games, and 85 wins.

Some stats are virtually unbelievable. The No. 7-ranked player, TTVAustinLive, has 7,862 wins, which sounds more realistic but still wild. Taylor saw someone with more than 100 days of gameplay.

“It’s exciting to see how much they’ve played,” Taylor said.

“We had so many different categories of information that we could have curated, but we were looking for easiest snapshot that we could give people,” Taylor said.

The point was to give players enough information to “talk trash to their friends, and spur conversations in new ways,” Taylor said. “At the one-year anniversary of Warzone, we thought this would be a great opportunity to do a look back on the past year and give consumers a really exciting way to see what they’ve done.”

Above: I’ve only won three Warzone matches so far.

Taylor called Chadha to figure out how to make the reports come together. The tech teams figured out what they would need from the players — the hashtag, the gamertags, and the Call of Duty account info in one tweet — to generate an interactive report. They decided that the players wouldn’t have to say what platform they were playing on, as it would needlessly complicate the tweet.

As the tweet took off on Wednesday, Twitter produced more than 100,00 Warzone stat reports in the first 24 hours, and it trended to No. 1 in the U.S. on Twitter and No. 3 worldwide. Players used the stats in the middle of conversations about who was better. Activision put some paid media behind the campaign to hit more people in the community beyond the core players.

The March 10 tweet that kicked it off was stoking an already hot topic, as the Call of Duty League teams, which are currently battling in a new season of esports tournaments, had kicked off a spicy Twitter conversation about who was the best the week before.

Chadha said that Call of Duty is in the top five in terms of conversations about the top games of 2021. He is is excited about doing more interesting integrations with Activision.

“We really just scratched the surface with the Call of Duty team,” Chadha said. “My hope is that we can continue to expand on this and explore new opportunities with Justin and the teams and see how we can do more to really cater to this audience.”