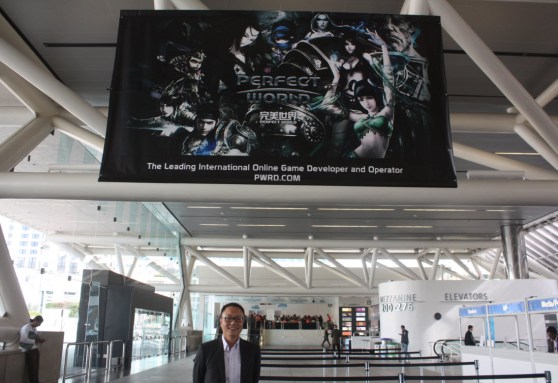 Above: Robert Xiao, CEO of Perfect World at the GMIC in San Francisco.

GamesBeat: I’ve had some interesting conversations with John Riccitiello, the former head of EA, about what brands mean in this space. A billion-dollar game in mobile is very impressive, but it doesn’t impress somebody like him, because he’s had brands under his control that made $10 billion or more over the course of a decade. The thing he would like to see mobile do is replicate the success of brands on consoles, where you have the same blockbusters come out every year and hold the number one position. He looks at Angry Birds and says that it had a good run for a few years, but it’s on the way out. You could predict that none of the games making up the top five now will still be in the top five in a year. Now, we may see something like Clash of Clans become that $10 billion brand, but that may be a long way away. I’m not sure what your perspective is on whether this will happen.

Xiao: Either there’s a long way to go toward that, or it’s probably impossible. I see this as a different playing field. I’m always thinking about business fundamentals. The barrier to entry is a very important factor. Consoles have always had the highest barrier. Because of that, the people who got in to that market were very protected from competition by smaller entrepreneurs. It’s easier for a few giants to dominate there. The same is true for the PC. Mobile, though, presents a rare opportunity for entrepreneurs. Maybe, later on, some sort of barrier to entry will come up, but for now I don’t see that a brand a can last that long, especially the brand of a project.

The brand of a company, though, or a team or an overall producer, can become dominating. Or maybe not just one, but several. There are big brands in every field, but those brands aren’t the brands of a single project. We won’t see Clash of Clans last for 10 years. Angry Birds probably won’t last for five years. But maybe Supercell can become a big name.

To follow that, what we’re trying to do is not to build a brand for our projects, for our IP, but rather to build a brand around Perfect World. In that sense, we’re learning from a company like Disney. You know Donald Duck and Mickey Mouse and all of those characters, but the biggest brand is Disney. Disney could last for another 50 years.

GamesBeat: What about whether those brands become worldwide brands, versus regional brands? Historically, Perfect World has been a regional brand, in China. That’s been a great business. I’m sure a lot of people don’t realize you have 4,500 employees. Do you think that you can continue in that kind of business, or do you think that going for a global brand is important?

Xiao: My focus, from day one, has been the global stage. We’re not the biggest in China, I have to admit, but we are one of the Chinese companies that’s been spearheading global branding and global networking. 4,500 is actually our global headcount. We have two offices in the bay area. We’ve heavily invested in two companies here – one in San Francisco and one in Seattle. We have offices in Japan, Seoul, Taiwan, Hong Kong, Thailand, and Malaysia.

We began spreading out a long time ago. Our goal is very simple. We want our products to reach all consumers. We don’t just want to create a brand. The baseline thing is to get our product to consumers and keep serving them. In many places – Africa, southern Asia, South America – we can’t do that yet. We’ll have to go through partners. But the number one thing is to get the product localized and to serve local consumers.

The second, then, is to build a portfolio of products and start to build a brand around that. We’ve been pretty aggressive in all the different markets I just described. That’s one reason I’m right here. We’ve been rather successful, over the last five years, as a Chinese company in the U.S. It’s time to start promoting our brand a bit more.

GamesBeat: If you observe any of the competition, do you see any lessons as far as how you should proceed? Some companies have acquired a lot of companies outside their territory in order to expand very quickly. Is that something you’ve thought about? You have made a few deals, but they’re not as large as some.

Xiao: We continue to learn different lessons, from our own experience and from our competitors. One of the biggest learnings we’ve had comes from when we started on this globalization process. We believe we have to treat every local office or local company as something local, rather than as a Perfect World company. We have to give them more autonomy. We have to use local people and local leaders. We have to empower them enough to operate in a local sense, rather than thinking that they’re just doing everything China wants them to do.

By doing that, we’re building a bunch of companies. Our U.S. company is a U.S. company that happens to be owned by a Chinese headquarters. The Japanese company is a Japanese company. It doesn’t even have the name “Perfect World” on it. That’s a philosophy we had in mind. The only way our subsidiaries can be successful is by competing with companies in their own market. We just provide them with enough resources.