If you build it, they will come.

Disney Infinity launched with Avalanche Studios at its core, and the House of Mouse tasked the studio with holding down all development duties. The Disney-owned studio helped form the framework for the company’s popular “toys to life” platform, a category that will generate about $3 billion in revenues in 2015, according to analyst Michael Pachter at Wedbush Securities.

The platform continues to grow as it nears its 3.0 release this fall, where it will incorporate some of Disney’s biggest brands, including Star Wars and Marvel. To keep up, Disney Interactive has invited several more developers to create themed play sets, including some big names from the console game world. Ninja Theory (Heavenly Sword), Sumo Digital (LittleBigPlanet 3), and United Front Games (Halo: The Master Chief Collection) are all signed on to launch play sets.

GamesBeat met with John Vignocchi, the vice president of production at Disney Interactive, just ahead of the 2015 E3 Expo to learn more about how the company managed to bring some of these studios into the fold. Here’s an edited transcript of our chat.

GamesBeat: Disney Interactive is working with eight studios now on Disney Infinity? Is there a point where you have to draw the line before it gets too messy or big?

John Vignocchi: No, it’s awesome. Everything is constantly on the up and up with the developer partners we work with. The fun thing is how they lend their expertise to improve elements of the engine.

GamesBeat: I bet Ninja Theory had a lot of expertise to add.

Vignocchi: They came in and said they had great experience working with combat and combat mechanics, and said ‘here’s some of the things we would do to modify the system you already have in the game to make it even more advanced.’

And it’s the same thing with the guys at Sumo Digital. They said that we have a really great base right now for what you’re doing with your driving controls, but there are some things we can go in there and tweak and tune to make it feel closer to some of the games we’ve worked on in the past. They said that what [we] have as a foundational base is not bad. 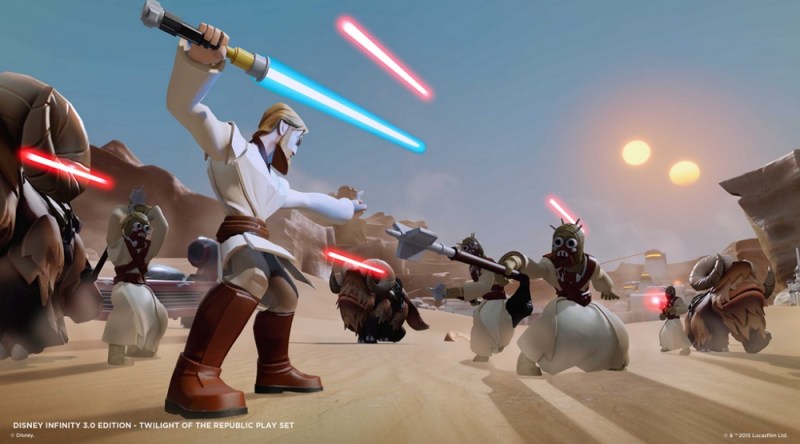 GamesBeat: How do they all work together?

Vignocchi: It’s been a really cool experience. We’re not only bringing together these great properties and brands, but also these great developers. Sumo goes and talks to the guys at Ninja Theory, and then Ninja Theory goes and works on the systems for the guys at Gobo, they go and talk to the people at United Front Games, and Avalanche is at the center of everything, and is kind of the hub of all things Infinity. That studio is incredible. The talent and the personnel in that studio are incredible because they are dealing with all of these different developers that all have different ideas and ways they believe they can improve the engine. It takes a really talented staff to look at that all.

Vignocchi: The one thing that people don’t think about is how much stuff breaks when someone goes and changes something. Not only does it break centrally inside of the engine, but then it breaks across every single character — and Disney Infinity 3.0, by the time we’re done, will have over 100 playable characters. So just making one slight modification or one slight tweak to something will go on and affect every single character. The management of that…this is one of the most complicated video games in development right now when you look at the amount of Perforce checkins we do, and the amount of back and forth between all of the developers, you see that on a daily basis. Not only is it complicated to work with all of these brands, but bring all of these studios together and make this work across all the developers we have is insane.

GamesBeat: Is the idea here to improve the game by expanding on the styles and genres available for the play sets?

Vignocchi: We wanted to expand what it meant to be a play set. We didn’t want to take a brand or property and force it into a particular gameplay style. We wanted to dictate what is the right gameplay or style for that brand or property. And I think we’re beginning to see that with inside out and as time goes on we’ll see that with Marvel. We’re taking that in a direction that we think is also something that will make Marvel fans incredibly happy. You hear us say all the time that this is a platform — we actually believe that. We believe that it’s a platform for gameplay types and styles as well.

GamesBeat: It must feel pretty good to have a team as talented as Ninja Theory on your platform.

Vignocchi: It’s so insane. At PAX, at the Giant Bomb panel we announced that Ninja Theory would be joining the platform. That’s really cool. But that’s also really weird. Why would these guys go and work with Ninja Theory? 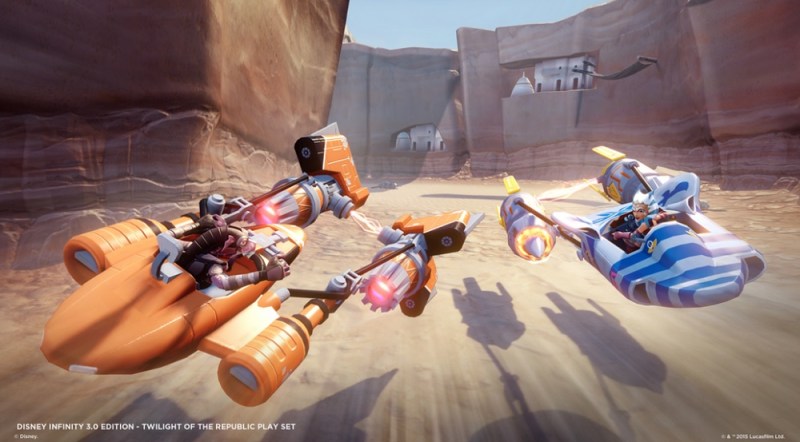 GamesBeat: I would think it would be seen as a privilege to work on some of Disney’s biggest properties.

Vignocchi: It’s funny that you think that way. We don’t come to it from that perspective. It’s like asking someone to prom. We met with those guys but were like, there’s no chance those guys will work with us. We don’t think there’s a chance that they’ll lend their expertise to Infinity, but we’ll try.

So at DICE [Summit], we sat down and had dinner with the heads of Ninja Theory and said that we’re working on Disney Infinity’s platform, and said here’s what our vision of the platform is, and here’s where we think it can go. We’ve got these great brands and we think it would make a lot of sense for you to work with us.

At the time, several years ago, we had mentioned that Star Wars was an opportunity for us, and that we’d love for someone to come in and teach us a bit more about how to make hand-based weapons cool. And obviously we’re a huge fan of their work from Heavenly Sword, Enslaved, and Devil May Cry. We had talked to them in a very humble way and asked if this was something they’d be interested in. Let’s face it: they’re a great developer and they don’t have a hard time finding work. They came back and said they’d be super interested in this. Of their studio now we have over 70 “ninjas” working on Infinity, which is the majority of their studio. It’s a privilege for us.

GamesBeat: How did it work with Sumo Digital?

Vignocchi: Same thing with Sumo. I met them two years ago at GDC. We were introduced because he was such an Infinity nut and I loved Sonic and Sega All-Star Racing. Outside of Nintendo, I don’t know who you would get to make a better kart racing game.

I came out of the GDC meeting and told the team that if we ever wanted to kind of tweak and tune some of our driving controls, these guys would be great. But at the same time, they really want to work on Infinity, so are we interested? We had several meetings with them and the CEO came, the creative director came, the head of production came — and they’re a gigantic studio 250 to 300 people. They said ‘our dream is to work with Disney and on Disney properties, and if Infinity is an opportunity to do that, we’re all in.’

What are you doing with United Front? Is it Marvel stuff?

Vignocchi: Although we’re not talking about the content they’re working on now, it will make a lot of sense once we unveil what kind of play style they’re doing and why they’re doing it.