In the booming digital collectible card games (CCG) market, the cards seem to be stacked against newcomers.

SuperData Research estimates 2015 revenue in the genre at $1.3 billion worldwide, driven by CCG’s suitability for play sessions on smartphones and tablets. The market leaders rely on established brands such as WarCraft, Marvel and Magic: The Gathering, with more heavy-hitters like Star Wars and The Elder Scrolls on their way to the card tables.

How does a well-reviewed no-license-attached game from an independent studio succeed in the increasingly crowded genre? We met with Tequila Games’ PR manager Marcin Traczyk to talk about mobile CCG Earthcore: Shattered Elements and the company’s plans to grow and retain its user base. 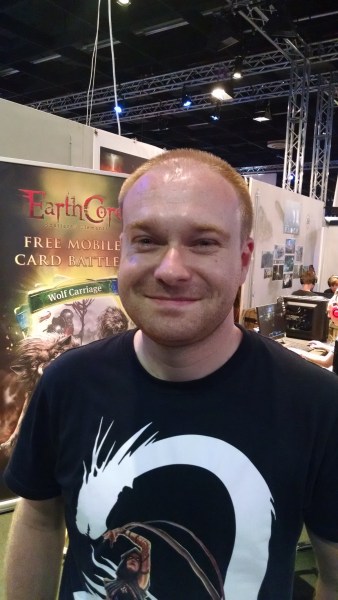 Earthcore’s take on the CCG gameplay formula has some twists. It has a complex skill system and allows custom card creation, features that resonate well with hardcore players. According to Tequila Games, the average daily playtime session is 77 minutes on iOS and 75 minutes on Android. Eight percent of Earthcore players have already spent more than 10 hours with the game. Among them is a player who has racked up 500 hours since the launch in May. “We like him a lot” grins Traczyk.

Earthcore is a generous free-to-play game. It doesn’t use timers or lock particular features behind a paywall. Players can purchase booster packs with additional random cards with gold, a soft currency gained during regular gameplay, while diamonds (premium currency) are used for speeding up the card-crafting and customizing player’s appearance. About 1 percent of worldwide iOS players are spending money on the game; the conversation rate in the U.S. is 1.6 percent.

“Players enjoy that they can really play for free. We don’t force them to pay for anything and we still manage to get pretty good numbers in monetization” remarks Traczyk, emphasizing the average revenue per paying user “varies from $30 to $40. On our best days we even manage to double the ARPPU that Hearthstone gets. There’s a difference in the numbers of players, obviously, but from a business point of view our numbers are very promising.” Tequila Games does not disclose the number of its active players, other than admitting that it’s significantly smaller than Hearthstone’s 30 million.

Traczyk explains how the studio is trying to foster organic growth and player retention by continuously expanding the game and adding new features: “After the initial promotion, the number of players has dropped, but we still managed to get some good organic traffic. We’re trying to boost it in various ways. For example, last month, we added special events as a new game feature. Now each weekend we have tournaments, PvP battles between players, which helped us to increase average play session length.”

Tequila Games is constantly reviewing retention data to understand where, according to Traczyk, “players may be getting bored and we should try to stimulate them better.” New features are being discussed with “some of our invested players.” A popular idea that will go live in the near future is the ability to create certain recruit cards for card crafting instead of hunting for them in random booster packs.

Another benefit of expanding the game is the chance of being featured in the platform holder’s spotlight: “In June we launched the first expansion that added events and also some new cards,” says Traczyk, “Back then we got featured again by Apple as best new update, and we got another huge boost in downloads, which is still helping us a lot. So we see huge potential in those new features that we are adding.”

Standing out from Hearthstone, Magic, and others 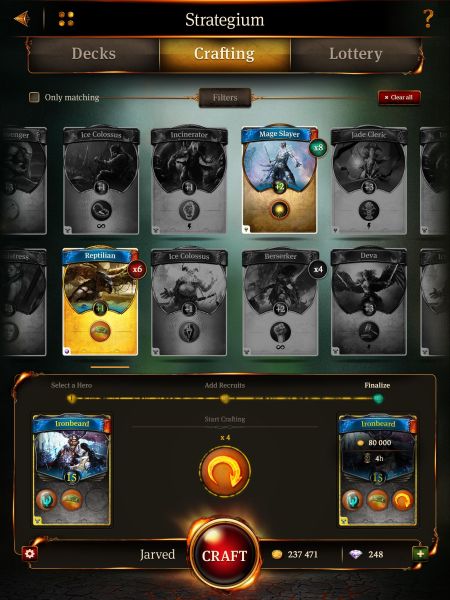 Above: You can craft cards in Earthcore, like in other card games — but here, you can modify them as well.

When it comes to competing with an increasing number of big brands in the CCG market, Tequila Games is betting on being nice to its free players and not pushing monetization too hard.

“We want to keep players for a longer time and don’t monetize them on the first day with a paywall,” explains Traczyk, “We believe that with our approach of being more generous, offering all access to all game modes, that this is our advantage in the market. I won’t be mentioning competition, but when you look at other big titles, they try to monetize players pretty quickly or release an expansion that costs lots of money.” Though Hearthstone allows players to pay for its adventure expansions with in-game gold as an alternative to real-world currency.

Tequila Games employs 25 people at its studio in Wrocław, located in southwest Poland, and is also working with contractors. Prior to Earthcore, the company had already released a number of mobile games and was able to establish crucial connections: “When we were developing Earthcore it was very important for us to show the game to Apple and Google, as well as our other business partners and get their feedback,” recalls Traczyk. After soft-launching on the Canadian App Store in December 2014 the developers spent another five months refining the game before its worldwide release in May 2015.

Is Poland a good place to operate a mobile games studio? “Poland has a lot of creative power in it and a lot of people who want to work in game development”, says Marcin Traczyk, mentioning the success of big domestic productions The Witcher 3 and Dying Light. He also thinks that a certain appetite for creative risks is helpful: “Almost all of the Polish studios are independent studios, so I think that the courage to try new things is an important thing here.”

What’s next for Earthcore? Tequila Games is currently preparing new game features for the mobile platforms, as well as working on a PC version that should be released before the end of the year. It will support cross-platform play so that users can continue their progress from the mobile versions and vice versa.

Further down the road Traczyk can see the potential for additional games that are set in the Earthcore universe, not least because of the involvement of game designer Michal Oracz: “He’s a famous Polish board game designer who’s already created very complex new RPG systems. When Michal was working on Earthcore he already saw many ideas for various games.”