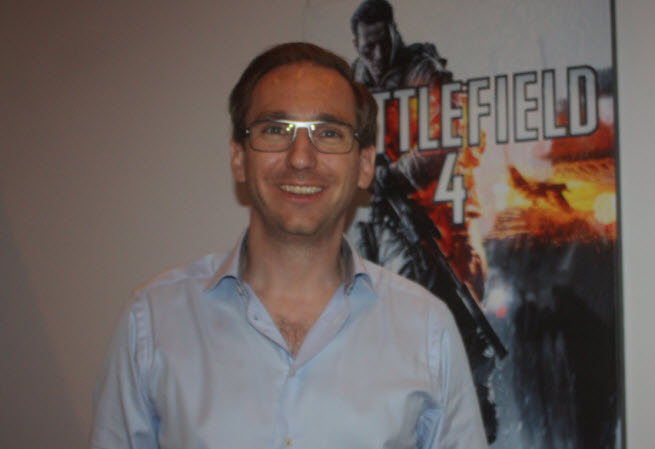 There’s no pressure on Karl Magnus-Troedsson. He’s just the guy who has to beat rival franchise Call of Duty, revive Mirror’s Edge, and work on the next Star Wars game. The general manager of Electronic Arts’ DICE studio in Stockholm has to juggle multiple blockbuster games under design. But the big one coming this fall is Battlefield 4, the next installment in the modern-combat series coming on next-generation platforms including the PC, PlayStation 4, and the Xbox One.

Magnus-Troedsson’s job gets easier because all of EA’s major games (except sports titles) are now using the Frostbite 3 engine as the common development platform. Battlefield 4 will feature a new commander mode and 64-player multiplayer. Its graphics and destructible environments will be far better than in the past generation if EA’s demos are to be believed. We talked about all of DICE’s big games in an interview with Magnus-Troedsson at the Electronic Entertainment Expo (E3) in Los Angeles. Here’s an edited transcript of our talk.

Karl-Magnus Troedsson: It’s going very well, actually. It’s E3, so it’s chaos of course, but everyone has to deal with that.

GamesBeat: What’s the feedback been like on your demo?

Troedsson: We’ve been catching up on the Internet and hearing what people have to say on the floor. It’s very positive, both for Battlefield 4 and what we teased out there with Mirror’s Edge and Star Wars: Battlefront.

GamesBeat: Yeah, I don’t think anyone was really expecting those.

Troedsson: A lot of people have speculated about it. Some people have said that they were 100 percent sure that they knew it was going to show, but in hindsight it’s easy to be smart, right? It was a big day for DICE at the press conference, showing three games like that.

GamesBeat: It’s a diverse lineup there. Is there something in common there, besides the Frostbite engine? What else helps you do all three games at the same time?

Troedsson: Frostbite is a very strong common foundation to build on. It’s good for all of EA. We’re very happy about that, of course, since we built the engine from the beginning. We custom-built it for the first Battlefield: Bad Company a long time ago. Actually, during the last generational transition between consoles, that’s when we built it. Now, having that as a technology used by so many game teams within EA is very positive to see, and it’s also a strong force for us. If we need help with it at some point, a lot of people can jump in. They know the tools and so forth. That goes for all of EA. It’s easier to have everyone on the same engine. But that’s not what we’re counting on to deliver these games. It’s going to be built by DICE.

GamesBeat: I guess this isn’t an easy thing to do. With Criterion, it didn’t quite work out. RenderWare just didn’t fulfill the need. How do you think you’re able to be successful with this kind of technology?

Troedsson: There’s a couple of things. First and foremost, Frostbite is driven by what the game teams need. We don’t just sit around fiddle with stuff because we want to. We’re focused on building an engine and editors and workflows and pipelines that are driven by the game teams – what features they want and what improvements they need. We’re driving a whole community of developers now inside of EA that all together work on the engine. We have the core Frostbite team, of course, but then every game that we make on the engine makes the engine better as well. It’s a cool thing to see happening, a very collaborative way to work.

GamesBeat: How has it been upgraded for the next generation? What does the engine get better at doing?

Troedsson: There’s a lot of things happening under the hood when it comes to lighting and shaders, especially if you look at characters for instance. We’ve done some upgrades to animation and made that even better. A.I. and so on. You can probably find an engineer who can answer that much better than me. But one of the really important parts is scalability. We’re releasing Battlefield 4 now on five major platforms – [PlayStation 3] and PS4, Xbox 360 and Xbox One, and PC — which range quite a bit in their capabilities. If there’s one thing Frostbite does well now, it’s scaling up or down so you can make use of all the power of those different platforms.