The zany zombies are back. And this time, you don’t beat them — you join them.

Electronic Arts announced Plants vs. Zombies: Garden Warfare 2 today at the giant Electronic Entertainment Expo tradeshow in Los Angeles. Like the first from 2014, it’s a third-person shooter game where players team up as zombies to throw back wave after wave of angry plants. It uses EA’s Frostbite game engine, which creates the outstanding graphics in the Battlefield combat games. But this shooter has a keen sense of humor; like its predecessor, Garden Warfare 2 is silly.

I played Plants vs Zombies: Garden Warfare 2 at an EA preview event. It’s a lot of fun teaming up in cooperative play to throw back the waves of plants assaulting your zombie paradise. And the zombies can specialize in various weaponry, so they’re not nearly so dumb as they seemed in the past.

We caught up with Jeremy Vanhoozer, franchise creative director at PopCap Games, to talk about the design. Vanhoozer worked on the previous game, and he noted how it was a common request from players to play the zombies. This time, the world’s is bigger and “more alive,” Vanhoozer said. 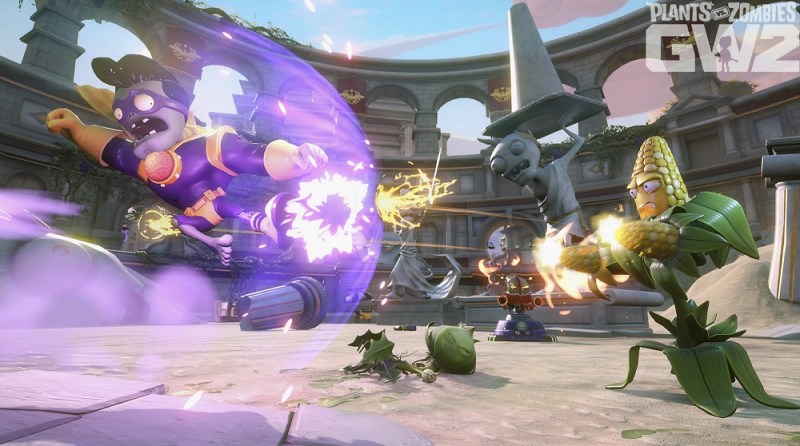 Above: Plants vs. Zombies: Garden Warfare 2.

GamesBeat: Did you work on the previous Garden Warfare?

Jeremy Vanhoozer: I did, yeah.

GamesBeat: The map we played today, you’re defending a point. You said you have 12 maps. Is there quite a bit of variety beyond this type of defensive map?

GamesBeat: What were you going for in the second game? How would you say it’s a different experience, aside from just playing zombies?

Vanhoozer: For us, the first game was an exploration. We had to figure a lot of things out. We had the classic Plants Vs. Zombies games, but to take that and take such a sharp turn into the shooter genre and figure out how the game would work and be fun in that context—there was a lot of exploration in that first game.

In the second game we had a bit more of our stride going. We took our lumps as far as things we wanted to do in the first one, but couldn’t. We started with a list of things we wanted to do. We also started listening to the player feedback on day one. The mode that you played today was one of the number one asks. “I want to be on the zombie side defending against waves of plants.” We’d never done that before, so we started exploring that early on. But one of the main goals of the second game is to go bigger with what we’ve learned and deliver a better experience.

GamesBeat: You have single-player as well. Is solo similar as far as the maps and mission-based play?

Vanhoozer: We still have some details we’re not going to talk about yet, but the main goal of solo play is to allow you to play all modes against A.I. and to not have to play online to get into a competitive game. Also things like private matches, being able to set up the rules yourself. That way you can get in and have a slower pace or take down the health on the enemies.

We wanted to do a lot of things with the solo play, but the main thing was that in the first game, it was all multiplayer. You had to jump in right away and get into a match with lots of people shooting at each other. We want to take you out of that situation and let you do it on your own if you want to.

GamesBeat: Have you decided to do a full single-player campaign?

Vanhoozer: We’re working on lots of stuff. We like to say it’s kind of a PopCap twist on that. We’ll have more details later. We will explain it a bit better. But there are things we’re working on.

GamesBeat: As far as the intelligence of the enemies—I guess the plants were the smart ones before. Now they’re the ones coming at you in a horde. How smart do you want to make them?

Vanhoozer: It’s interesting. As we developed this A.I., we’ve worked hard to make sure the personalities are still there. The twist is that, when we turned that story around and put the zombies on the defensive—the whole premise here is that Zomboss has temporarily won. It’s his suburbia now. The zombies are defending for the first time. This is all new to them.

One thing we had to do on the zombie side—we have the browncoat zombie and the conehead zombie and the buckethead zombie. It was easy to understand when those came at you in hordes. But as you see in the demo, we’ve created a whole new line of characters for the plants, the weeds. We’ve created a new set of characters, the ones that will come at you in hordes. Then you’ll start seeing the plants with personality come at you in their way. The cactuses will stay high up. Sunflowers will heal the other plants. We’ve created new characters to make sure that some can run at you and some will stay back and act like the plants you’re familiar with.

GamesBeat: What are some changes you made because of feedback?

Vanhoozer: Most of the changes are more additions. We tried to make the worlds bigger and more alive. In the first game we didn’t have a lot of movement in the worlds. Now there’s moving machinery, time portals, lots of moving paths through the world. As we’re looking at our existing characters in the first game, we are going to make some ability changes and update some things based on player feedback and how we saw people play the game.

It’s more of an overall look at the game. It’s not that there are a few big things we need to change. It’s more about improvements that want to make. The changes are going to be more abilities, more things to do, more places to see, as opposed to, “Hey, this is really broken.” We didn’t have any of those, really. It’s more about player feedback on things we needed to make better.

GamesBeat: The PlayStation 4 and Xbox One hardware gives you a lot to work with. Is this making full use of Frostbite?

Vanhoozer: It is, actually. The new rendering technology, and just how many characters we can have onscreen. You won’t see it so much in this demo, but we’re really piling characters onscreen. Also, with all that movement in the world—if you’re in something like Zomboss Factory and we’re dragging five big robots across the screen as a hundred plants are coming at you, that’s something we really wanted to push.

This whole look and feel that we’re going for, it’s not realistic, but it is a very highly polished, almost living-cartoon look that we’ve established. We wanted to push it as far as we could – everything from next-gen lighting to really beautiful textures on these characters. It always sounds funny when we talk about pushing plants and getting zombies to look a certain way, but we’re taking great care to make sure the presentation is top-notch.

GamesBeat: Have you drawn some lessons from Battlefield multiplayer as well?

Vanhoozer: Being a part of EA is good for us as far as learnings. It’s not just Battlefield. It’s Mass Effect. We’re all talking about how we do things on different game teams. As we look to build a game, we want to make it as good as we can. It’s fun to come together with all these different teams at the beginning and talk about what we’ve learned and how we can make things better. When we’re done with this, we’ll go talk to all the other teams and tell them what we learned here. That’s one thing I like about having so many teams inside one company.

GamesBeat: This seems like a big part of PopCap now, Garden Warfare.

Vanhoozer: It is. One thing that we’ve done—again, with the first game, I feel like it was a game we wanted to make. The cool part is that people responded so well. Now we want to take it further. As far as the Plants Vs. Zombies franchise, this is a huge piece of it now. We’re still building classic PvZ experiences, but this has become a parallel path for us. 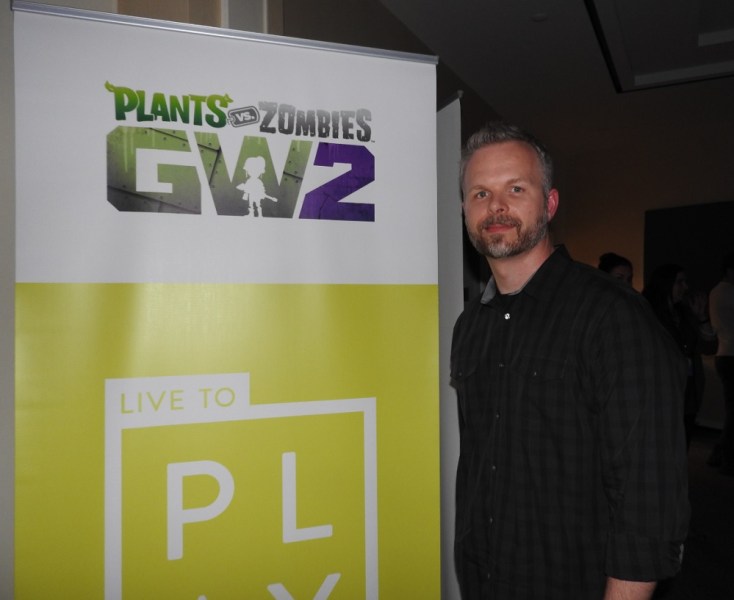 Above: Jeremy Vanhoozer, the franchise creative director at PopCap Games for Plants vs Zombies: Garden Warfare 2.