When I need to make friends, I just go on Facebook and start spamming random people. While that strategy isn’t really working well for me, mobile game developers are finding that a similar tactic on Facebook is much more effective for them and their free-to-play apps.

In fact, Facebook is one of the top networks that developers turn to when they need to “acquire users,” which is the clinical term for getting people to download and try a free-to-play game. For games that don’t charge an upfront price (and instead rely on large audiences that make small in-app purchases), finding new people to install the game on iOS, Android, and elsewhere is actually a huge, expensive undertaking. It requires developers to reach out to a variety of different ad networks, but Facebook is striving to rise above the pack according to developers like Nordeus, which makes the popular social soccer-management simulator Top Eleven.

“Scaling the user acquisition [for our game] on the global market can be very complicated,” Nordeus player acquisition manager Ratko Bozovic told GamesBeat. “We have to use a plethora of different networks to accomplish our goals, but Facebook stands out from the crowd because of its performance and innovative attitude.”

We’re studying mobile user acquisition.
Answer a few questions, and we’ll share all the data with you.

Facebook has 375 million people who play games at least once a month. That’s a huge number, and over the last 10 months to 20 months, it has found a way to build advertising products for developers that leverages that critical mass. Rick Kelly, Facebook’s global director of gaming sales, told GamesBeat that the platform’s size as well as its technology gives it an opportunity to introduce products that other networks probably couldn’t. 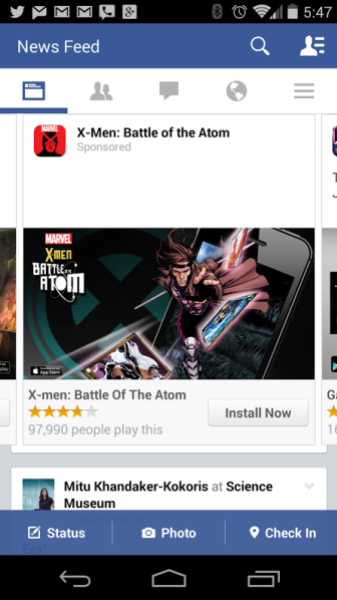 Above: I actually did download this. Let’s see if I ever spend any money.

“There are a couple of things that are working really, really well right now,” he said. “First of all, in early 2013, we launched mobile app install ads. This is when you’re on your phone, and you’re scrolling through your feed, and you see an ad on your third or fourth story down. They’ll typically say ‘download Candy Crush Saga’ or whatever mobile game a developer is looking to distribute.”

These kinds of ads will pop up on both the iOS and Android versions of the Facebook mobile app, and it’s one of the fastest-growing products for the company.

“On mobile, App Installs has been one of our best performing ad products, driving over 350 million installs to date,” Facebook founder and chief executive Mark Zuckerberg said during a conference call with investors in April. “Over 60 percent of the top-grossing apps on the Apple App Store and Google Play use Mobile App Ads, which is pretty impressive performance for a product that launched in January last year.”

Kelly thinks he knows why this particular feature is doing so well for Facebook and the developers that use it.

“You’re already on your phone,” he said. “You’re on the device that can play this game, and it’s really just a very simple click-to-download process. It’s really effective for game developers, because it all happens right at the point of consumption.”

Of course, this works with things besides games as well. Customers are likely to find ads for travel apps or financial services in their Facebook feed, but Kelly says that game developers are among the most “forward leaning” when it comes to experimenting and adopting these ads.

Nordeus uses them along with an entire suite of other advertising options, and it’s not alone.

“[There are so many developers looking to this option] that we almost can’t even deliver the amount of ads that studios want to pay for,” said Kelly.

“Due to the reach, precise targeting, and ad layout, we are finding the Facebook mobile app ads to be one of the most-effective places to invest for most of our games,” Gree director of user acquisition Zand Ushijima told GamesBeat.

While the mobile app ads work well by themselves, Facebook isn’t only offering a prime location. The company also provides a variety of ways to target ads at specific kinds of people. While the social network might have 375 million gamers, studios mostly just want those that are going to spend money on its games. To help developers get to those people, Facebook offers prepackaged “targeting clusters” that will only put ads in front of certain people.

“For example, we have clusters like ‘engaged gamers,’ ‘console gamers,’ and ‘casino gamers,” said Kelly. “Basically, we’ve looked at the different genres that people like to play and built targeting clusters that advertisers can easily utilize.”

However, Kelly feels most developers will only want to start with these preconceived marketing groups since Facebook also has an option to target people on an even more granular level with something called “custom audiences.”

“This is a feature that enables developers to take specific chunks of their customer database — for instance, maybe it’s people who made an in-app purchase in the last 30 days — and the developer can upload that group of users into Facebook’s ad tool and target only those players with a specific message.”

This empowers developers to only spend money in an effort to retain their most valuable players. If someone made a purchase in a game but not for the last few weeks, a studio could use Facebook to target that person with a special deal or sale. The social network can also do “lookalike targeting,” which will put ads in front of potential customers that are similar to those who already engage with and love the game.

Gree also uses custom audiences for all of its games, and it is finding some of its biggest return-on-investment through that feature.

“While it may not have the largest reach, custom audiences provides extremely high-quality users,” said Ushijima. “Especially when used in tandem with the [pro-packaged] targeting the platform offers. It returns some of the most-profitable campaigns.”

Of course, this kind of targeting only works for developers who have the right data, and it’s different for each game. That also puts the onus on the developer to figure out what works and what doesn’t. Analytics isn’t a new concept to mobile developers, so many are well equipped to take advantage of these features, but it is still a tough process.

“It requires a lot of experimenting and testing in order to maximize the potential of Facebook’s advertising capabilities,” said Bozovic. “This is a never-ending saga, not only in terms of constant optimizations, but also because we need to keep an eye on the new advertising products and changes that are very common on Facebook.”

That experimentation is working for the Top Eleven developer — especially when it comes to enticing longtime players to re-engage with the product.

“Nordeus has seen a 500 to 600-percent return on their ad spend on Facebook,” said Kelly. “They combine their ad unit with custom audiences to ask existing players to come back into the game to continue where they last left off. These re-engagement ads pop up right where other people might see the mobile app install ads, but they’re also available on the desktop that will link back into the Facebook version of the game.”

Nordeus has 12 million players, which means it has a huge audience that it can target with different strategies. It can choose just the ones that pay as opposed to the ones that aren’t making any in-game purchases, and this enables them to maximize the lifetime value of their active player base.

“It really makes a Facebook download far more valuable than what they can see on other mobile ad networks,” said Kelly.

“For a game like Knights & Dragons, it has allowed us to expand our player-acquisition strategy while also learning a lot about the users that are interested in our games,” said Ushijima. “Knowing our customers and how they engage with our games is incredibly valuable both to the marketing and development teams. It helps us to build more of what we know the players want and ensure that when we do finally release games, we know what kind of information is attractive to [our players].”

With mobile game spending growing each year, Facebook is well-positioned to take advantage of that, and these advertising products are likely to make a bigger and bigger portion of its revenues heading into the immediate future.