Bringing back old video games is a complicated job. You can’t just say “I want to make a new Karnov, so let’s go talk to Data East about that.” That publisher doesn’t exist anymore. It went bankrupt, and the rights for many of its franchises are now scattered among different developers, individuals, and holding companies.

But that is where French developer DotEmu comes in.

DotEmu has found a niche bringing back beloved classics even if it means tracking down obscure rights holders, and that team is now using its knowledge to bring back ancient hits like the SNK arcade disc battler Windjammers and shapeshifting platformer Wonder Boy III: The Dragon’s Trap. Both have cult followings, and they also had complicated legal barriers that prevented anyone from remaking them before this current effort.

“Since the beginning, we’ve specialized in bringing back awesome licenses from the past — the ’80s, ’90s, and early 2000s,” Imbert told GamesBeat during a chat in December. “That’s how we got these licenses. We’ve also worked on games like Double Dragon, Another World — we worked a lot with SNK in the past, which is why we’re doing Windjammers.”

Imbert has developed a skillset specifically aimed at sniffing out licenses and bringing back lost games. After years of working with companies like SNK and Square Enix, he has developed a strong roster of contacts in Japanese publishing that enables him to make deals that others would find impossible.

“Personally, I go to Japan at least twice a year,” he said. “Each time I go there, I have my list of IPs, and I go to try and find the IP owners. We explain what we do and why we want to do it, try to convince them that it would be a good idea to bring these games back.”

Imbert explained that the responsibilities of working directly with Japanese companies fell to him largely because these deals often require a CEO’s involvement. Japanese companies respond better to someone at that level of a business, and it’s important for a high-up decisionmaker to understand the intricacies of making contracts based on established IPs. And so through his experience, Imbert has developed the proper touch for gaining the trust and respect of business owners in that country.

“It’s always good when it’s the CEO or the president who goes to see these companies,” said Imbert.”It gives more credibility to the project and more confidence to the IP owners. It’s not easy to convince people, especially on the Japanese side. The IP owners are very careful with their properties.”

But after successfully updating nearly a dozen games, Imbert said that his whole team now understands how to present a prospective project to Eastern rights holders.

“It’s not all about business or all about money,” he said. “It’s about respect, mutual respect, and passion for the project. Usually the games we work on — at DotEmu we think about it all together, whether it’s the developers or the marketing people or whoever else. We all know the games really well. Maybe people feel that we really enjoy these games. We’re not just there to exploit a license for money. We’re there because we like these games and we want to share them. We’re a small team of passionate people, and maybe that rings true to them.”

The unique difficulties of Windjammers

At the PlayStation Experience fan event in Anaheim early last month, Sony revealed the trailer for DotEmu’s rerelease of Windjammers, which is coming to PlayStation 4 and PlayStation Vita “soon.” As part of the announcement, Sony third-party-relations boss Gio Corsi called the game “Dave Lang’s nightmare.” That’s a reference to developer Iron Galaxies and its CEO, Dave Lang, who looked into the possibility of bringing the franchise back. During an interview with the publication Giant Bomb at the Electronic Entertainment Expo in 2015, Lang declared that fans would never get another Windjammers. The CEO was apparently convinced that figuring out the property rights weren’t worth the effort.

Well, DotEmu figured them out.

Let's hear what @JosephJBroni has to say on the matter of Windjammers. pic.twitter.com/R1Hj4ZbGTa

“Every time we look into a license we do some research on the existing community or any other recent stuff that’s been talking about with a particular license,” said Imbert. “We found Dave Lang’s video on YouTube, where he said that there would never be another Windjammers again. It had a few thousand views already. That gave us some confidence, because we found out that a lot of people wanted the game back. We even thought about including that in the trailer.”

Imbert and DotEmu wanted to bring Windjammers back; they have a deep affection for the game. The studio had already built a strong relationship with SNK after working with the publisher on bringing back some of its previous arcade hits, like Metal Slug and Fatal Fury. So DotEmu is familiar with Neo Geo-based games. Imbert calls the people at SNK his “good friends.” And the team at DotEmu are even passionate Windjammers players who regularly organize internal tournaments. Bringing back that game seemed like the obvious next step. But, of course, it wasn’t that easy.

“We knew that SNK didn’t have the license for that one because otherwise they would have asked us to do it already,” said Imbert. “We’ve done almost all of their games. But this game is so awesome, and we were having so much fun with it in the office —  we all thought it would be so cool to bring it back and bring the esports side out of it. Our tournaments were getting pretty crazy. People were shouting and really getting into it, really wanting to win. So we did the same thing we always do. We started searching.”

DotEmu first started trying to follow the trail of who owned the rights to Windjammers on the Internet. When that turned up nothing, Imbert reached out to his contacts in Japan. In the end, one of those friends helped them find the current IP holders and even set up a meeting.

It turns out that a mobile developer called Paon had picked up the rights. Imbert met with them and explained the project.

“These guys were so cool,” he said. “We really had a good feeling. They’re rock music lovers; I’m a rock music lover. We talked about music and all this different stuff, and we explained the project we had in mind for Windjammers and the love we have for the license. We know every character by heart, every sound effect by heart. They said, ‘Yeah, we had some propositions from other companies in the past, but we were never convinced. But we’ll try it with you guys.’ Maybe it was because of our experience with SNK, but also because of our passion for the game. That’s how it came to be.”

And that’s how DotEmu made Dave Lang cry. 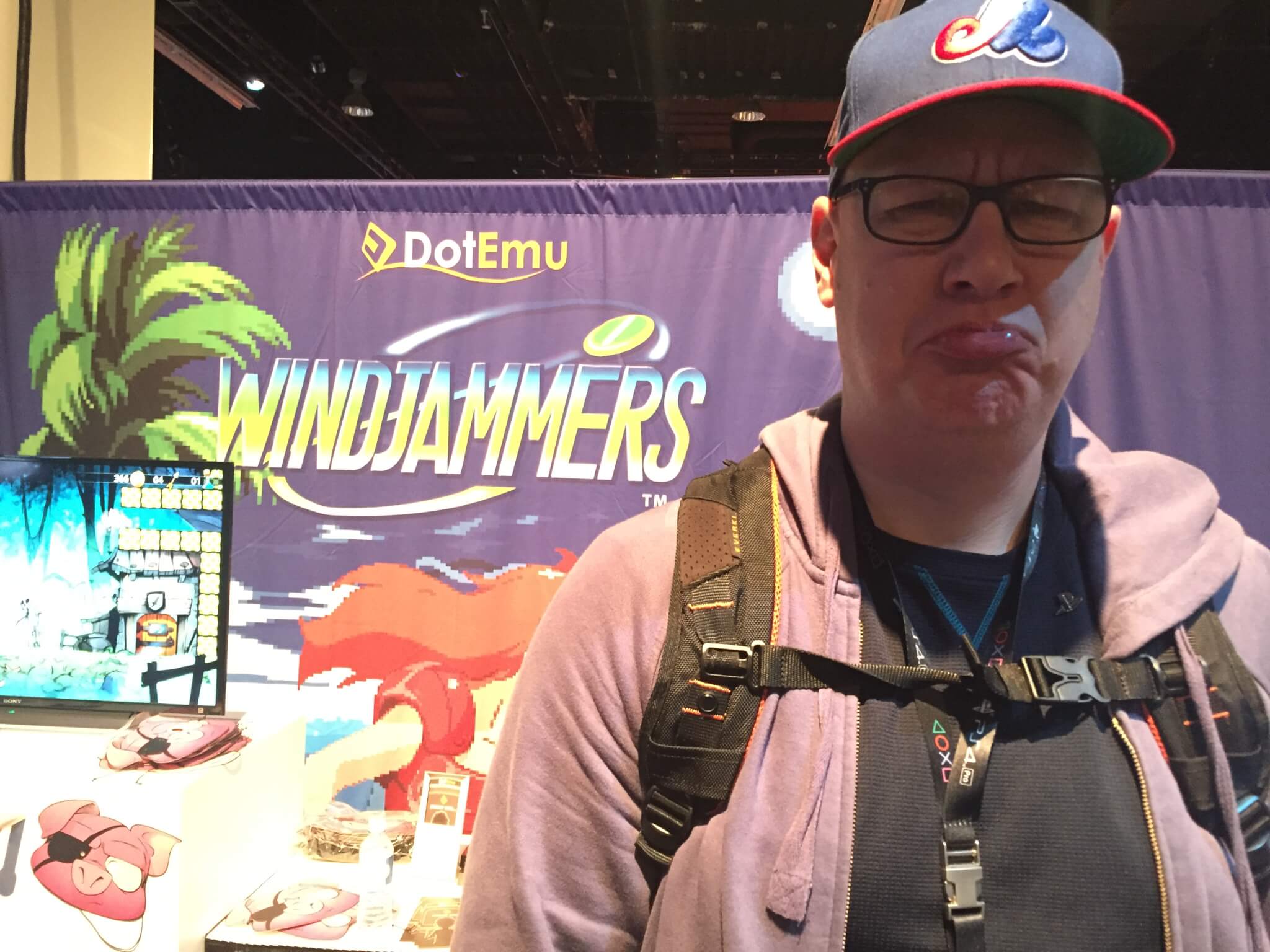 Above: Chin up, big guy.