GamesBeat: How flexible have the Friday the 13th creators and licensors been about your creative vision for the project so far?

Keltner: They loved our design from the start. They didn’t want to get in the way of the vision we had for Summer Camp. It fit so nicely with the license.

Granted, there’s always some snags here and there when you’re working with a franchise that spans several mega companies like Paramount, New Line, and Warner Bros. But so far, they have been accommodating and open to our ideas, both new and our original ideas for Summer Camp.

GamesBeat: It looks like you guys have Tom Savini, the legendary special effects artist, on the team. What’s his role?

Keltner: Tom will be our very own Sultan of Splatter. He gets the opportunity — which he’s very excited about — to redesign a new Jason, exclusively for the game.

That’s pretty rad when you think about it. He birthed the look and feel of Jason, and now he gets to go back and tackle that again. He is also creating the kills for Jason. Granted, we will have some fan favorite kills from the films in the game, but we thought it would be cool for Tom to come up with new ones. It’s been … what? … twenty-five plus years since he’s had to think about how Jason could creatively kill teens with household implements? He’s got to have a whole diary full of gore and mayhem we get to tap into.

GamesBeat: How is he taking to the video game medium?

Keltner: This isn’t Tom’s first foray into games or digital gore. He teaches a school on practical special effects and make up, and within the school, they use programs like Maya, etc. to tease out ideas before giving birth to them in real life.

He has also acted as an adviser on a few games in the past, but not at the level her will be for Friday the 13th. When talking with him, one of the things he is most excited about is the freedom this allows.

When shooting a film, there are so many variables at play to really sell a gag to the audience. The weather, lighting, and actor energy levels just to name a few. Everything had to go off without a hiccup, perfectly, at the right moment.

He had to create several of these practical effects, just to make sure multiple takes can occur, for film. With games, he just has to create it once. This frees up time to be more creative and really push the envelope. 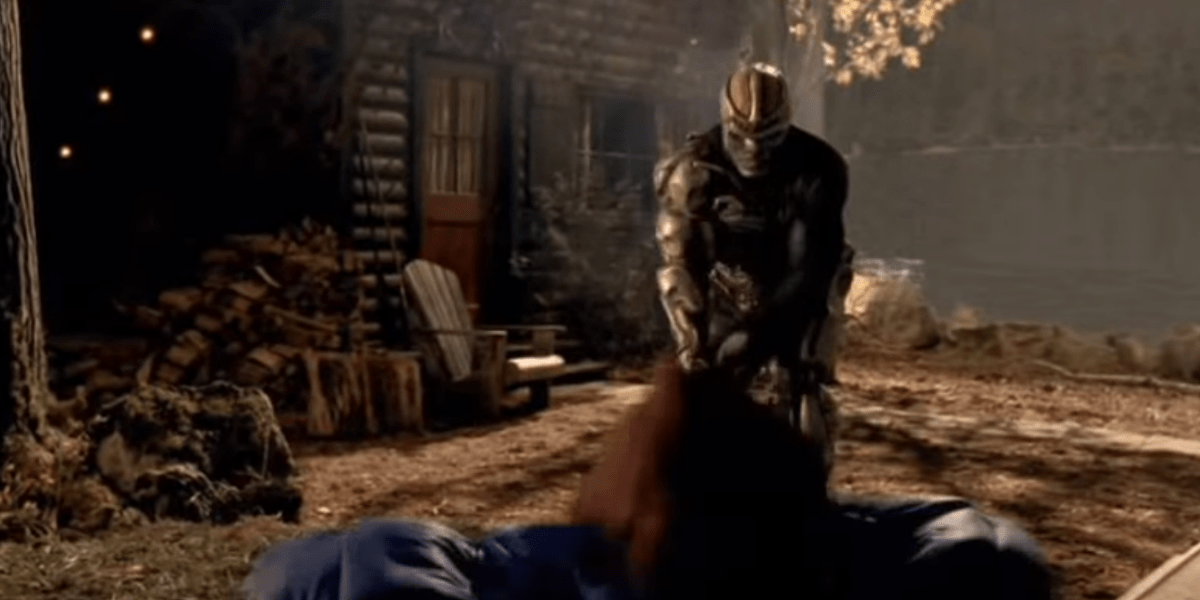 GamesBeat: One of my favorite scenes from the entire Friday the 13th series is actually from Jason X. Whenever I think of Friday the 13th, I think of the “we like premarital sex” scene from that movie. It’s this really great bit of self-reference. Tell me, will I be able to batter one of my victims with a sleeping bag?

Greenback: Of course! Sleeping bags are pretty much a staple in Friday the 13th as far as kills go. We’re aiming to recreate all of the different sleeping bag kills from across all of the movies, especially the infamous one from Part VII.

I know know of many other games that feature interactive sleeping bags. Actually, I can’t think of a single one at the moment. Maybe we’ll be the first?

Keltner: Interactive Sleeping Bag Technology! That might just be a back-of-the-box bullet-point!

Gonzalez: A huge challenge for us is making sure these moments make sense from a gameplay point of view. Games are non-linear, and players can do a lot of random things at any point in time. Our goal is to entice players into getting themselves into situations where this type of thing might happen.

In a multiplayer match, things get even more chaotic. We need to make sure we lay out the tools and keep the gameplay simpe enough to have these experiences.

GamesBeat: Another kill, which actually terrified me as a child … and I mean, I never laid on my bed the same way again after seeing it, was from the original Friday the 13th. Where the dude is just laying in bed, enjoying his joint, when boom! This arm grabs him from under the bed and jabs an arrow head through his neck from behind, through the bed!

What are some memorable, or favorite, death scenes from the series? And can we expect any of them in the game?

Gonzalez: I have lots of favorites, but one of the most rewarding is in Part IV, when Jimmy dies. He’s just being really annoying yelling at Ted, trying to find the corkscrew. As a viewer, you are kind of like, “Finally! Someone shut him up!”

…and then you really need to evaluate why you were relieved about someone dying because they annoyed you … in all fun, it was Jason giving him the corkscrewer, then cleaver to the face!

Keltner: Oh man … so many to choose from. I actually really liked the speargun kill, in part III.

It was just moments after Jason got his mask for the first time, and then he walks to the end of the dock and the female counselor is wading out into the water, trying to retrieve a dropped wallet. That was the first — and I think only — 3D film in the series, and they tried to milk that, hard.

Especially with the speargun kill. Jason fires it basically right at the camera, so you get a good jump effect from the audience … but then it hits the counselor right in the eye. So it was a mixture of being a 3D scene, and the first kill Jason committed with his newly found mask. Epic.

GamesBeat: Let’s talk about gameplay. Primarily, the asymmetrical multiplayer. How is this going to work? How can the seven camp counselors take out Jason? And what stops Jason from just going ape all over the counselors as soon as possible?

Gonzalez: A huge misconception here is thinking that you can ‘take out’ Jason. Is it possible to stop Jason in a match? Certainly, but it is extremely difficult and rare.

The goal isn’t to beat Jason in a fight, it is to survive and escape. Jason is over powered, if you watch Friday the 13th Part IV, it is where the series turned up the heat on how absolutely brutal Jason can be. There are so many window breaking scenes in that movie, it will make you laugh. Jason is a beast and we aim to deliver that experience.

If you were on even terms with Jason, you wouldn’t be terrified when you see him. It is important for us to introduce that, while making sure you still have a lot of fun being a counselor. It’s almost like hot potato, no one wants to hold a hot potato, but it’s great to have that experience with a group of friends.

Keltner: Kehdrin [Gonzalez] is correct. This isn’t a competitive game. You can’t compete against Jason. I mean, that one kid, in Jason Takes Manhattan, tried to go up against him. Remember that scene? It was up on some rooftops. The character was a boxer. Yeah, we know what happened to him.